Head Gas. On display paintings and works on paper that are part of a series of portraits rendered delicately in pencil and luminescent fields of acrylic paint applied with a sponge or caressing brush. David's imagery suggests bodies a the point of apparition or dissolution -beings that cannot be contained or consumed, perhaps only passed through, and reluctantly present. 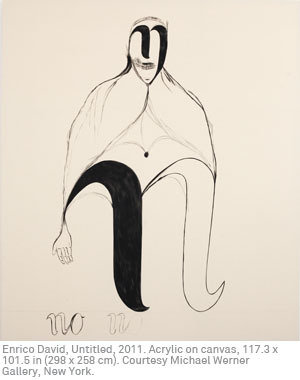 New York, NY…The New Museum is pleased to announce the second exhibition in its recently inaugurated ‘Studio 231’ series. “Head Gas” is the first New York exhibition by Italian-born, Berlin-based artist Enrico David. Over the past twenty years, David has produced a body of work encompassing painting, drawing, sculpture, and collage that draws upon a rich variety of sources and expresses a range of complex emotional states. Although his work is highly celebrated throughout Europe—the artist was among the nominees for the 2009 Turner Prize, for example—David’s work has rarely been exhibited in the United States.

“Enrico David: Head Gas” will be on view from January 18 – April 22, 2012. The exhibition is organized by Gary Carrion-Murayari, Curator.

The figures populating David's work convey the struggle of adaptation, both physical and psychological, of the self and of the image. In his art, we see haunting, incomplete, and sometimes grotesque characters fighting against and merging into backgrounds comprising a personal lexicon of forms. These patterns are derived from craft, folk art, and twentieth-century design, as well as advertising, techniques of display, fashion, and art historical moments. Previously, David choreographed his figurative works to imply dramatic narratives, at times using the exhibition space as a stage. His exhibitions function as performances of self-analysis constructed and theatricalized specifically for public display. Through David’s highly personalized iconography, the works act as mirrors, reflecting viewers’ desires, fears, and vulnerabilities. In David’s more recent work, the implications and strands of psychological tension are enacted within a more formalized, image-based corporeality.

For his ‘Studio 231’ exhibition, David has created an entirely new body of work. The paintings and works on paper are part of a series of portraits rendered delicately in pencil and luminescent fields of acrylic paint applied with a sponge or caressing brush. David’s imagery suggests bodies at the point of apparition or dissolution—beings that cannot be contained or consumed, perhaps only passed through, and reluctantly present.

“I imagine these images as the product of a conscious, physiological act of will. To exist despite the alienating and antagonizing nature of their surrounding environment—as if a precarious and utterly temporary agreement was struck between them and the molecular components of paint and canvas, lines and colors, even the space itself, threaten to engulf them,” says David. “These conditions, as ridiculous and unlikely as they may sound, represent for me an experience that feels real, necessary to embrace, even optimistic.”

“Head Gas” also features a new series of hand-painted paravents. These folding screens, originally conceived by the artist for his own apartment, create an architectural intervention within the exhibition space, simultaneously connecting to the images occupying the gallery.

Enrico David is the second artist featured in the New Museum’s new ‘Studio 231’ series. The Museum inaugurated the series in October 2011, with a new installation and performances by London-based artist Spartacus Chetwynd. ‘Studio 231’ is a series of commissioned projects in the museum’s adjacent, ground-floor space at 231 Bowery. This new initiative will give international, emerging artists the opportunity to realize ambitious new works conceived especially for the space. These projects at 231 Bowery also seek to foster a new relationship between the artists and the public by allowing artists to create work outside the confines of the main museum building and in closer proximity to the energy of the street and to the creative space of the artist's studio.

Following the exhibition of Enrico David’s work, Swedish-born artist Nathalie Djurberg (b. 1978) will mark the third presentation in the ‘Studio 231’ series. “The Parade: Nathalie Djurberg with Music by Hans Berg” will be on view from May 2 – August 26, 2012. This is Djurberg’s most ambitious multimedia installation to date and the largest American museum presentation of this artist’s work. Originally organized by the Walker Art Center, Minneapolis, Djurberg will adapt the installation for the New Museum’s space at 231 Bowery and will expand the project with a new animated film.

Support
Generous support for ‘Studio 231’ is provided by Mitzi and Warren Eisenberg, Susan and Leonard Feinstein, Hermine and David Heller, Lietta and Dakis Joannou, Toby Devan Lewis, and the Board of Trustees of the New Museum.