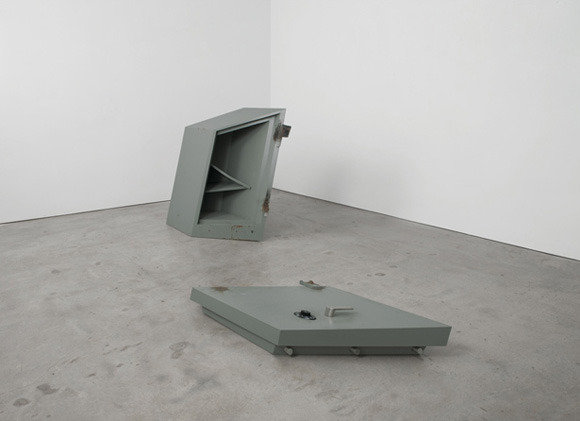 I, too, wondered if I could sell something and succeed in life. For quite a while I had been good for nothing. I am forty years old… The idea of inventing something insincere finally crossed my mind and I set to work at once.
—Marcel Broodthaers

A fiction allows us to grasp reality and at the same time that which is veiled by reality.
—Marcel Broodthaers

a group exhibition curated by Jonah Freeman and Vera Neykov

The tradition of art as trickery or deception is rich and varied. Whether it is the fantastical architecture imagined by Piranesi, the Surrealists' use of trompe l’oeil, or the Cottingley Fairies photographic series by Elsie Wright and Frances Griffiths, much of the significant art over the last century has approached questions of authenticity through methods of appropriation, re-contextualization, and critique. Examples in expanded culture are equally numerous, ranging from Luis Buñuel’s faux ethnographic film Land Without Bread (exhibited), and Orson Welles’ 1938 fake radio news presentation of H.G. Welles’ War of the Worlds, as well as in recent years: Clifford Irving’s fake biography of Howard Hughes, the false journalism of former New York Times writers Judith Miller and Jayson Blair and the late capitalist trends of credit default swaps and phantom wealth.

Anchoring the exhibition is the work of Marcel Broodthaers, whose short yet diverse artistic career employed fiction as its principle medium. In projects such as Musée d’Art Moderne, Department of Aigles (1968–74), and Décor (1974–75), Broodthaers presented a situation in which objects and environments framed as ‘fictions’ revealed the layered and often dubious conditions of our so-called ‘real’ institutions.

Accompanying the exhibition will be a fully illustrated catalogue that along with documentation of the work exhibited will also include interviews, writings, and ephemera surrounding the themes of fiction and deception. A viewing schedule for the films will be released on the gallery website in conjunction with the show.

For press inquiries, please contact Amani Olu at (212) 228-5555 or amani@nadinejohnson.com

Opening the evening of Thursday, January 19 from 6–8pm