"John Baldessari: Class Assignments" is based on his class notes, students from CCA's Graduate Program in Fine Arts will, for instance, be instructed to imitate Baldessari in actions and speech. "101 Collection: Route 3" examines the essential nature of an art collection and attempts to provide an alternative organizational strategy to that of a thematic structure. 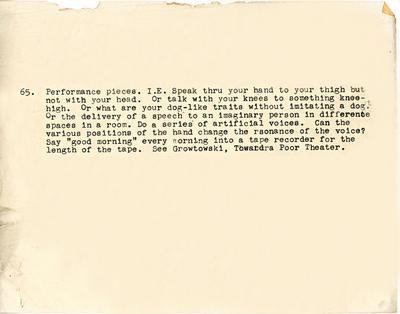 Students from CCA's Graduate Program in Fine Arts will exhibit works that they created based on Baldessari's teaching notes from his time as a professor at California Institute of the Arts (Cal Arts). The original course was titled Cal Arts Post Studio Art: Class Assignments (optional), 1970. Based on his class notes, students will, for instance, be instructed to "imitate Baldessari in actions and speech. Video," "Disguise an object to look like another object," or "Develop a visual code. Give it to another student to crack."

This exhibition pursues two of Baldessari's own concerns. The first is art making -- specifically his predilection for language's structure and arbitrary games, which have been a key element in his conceptual works of the 1970s, such as Throwing Three Balls in the Air to Get a Straight Line (Best of Thirty-Six Attempts) from 1973. These pioneering conceptual works from the 1970s have exercised a considerable influence on generations of younger artists.

The second is pedagogical. For many decades Baldessari has been directly engaged with the education of artists. In 1959, he began teaching art in San Diego and continued working with students for nearly three decades, most notably between 1970 and 1986 when he taught at Cal Arts. There, Baldessari taught Post Studio Art, a class that went against the grain of educational tendencies of the time, by promoting the advancement of a specific medium. Many of the strategies Baldessari deploys in his own work -- experimentation, rule-based systems, and the defiance of arbitrarily imposed limits -- are akin to contemporary pedagogical methods.
John Baldessari was born in National City, California in 1931 and lives and works in Santa Monica, California. He received a BA (1953) and MA (1957) from San Diego State College, continuing his studies at Otis Art Institute and Chouinard Art Institute (1957–59). Baldessari has received several honorary doctorates, most recently from the National University of Ireland, Burren College of Art (2006) and was elected to the American Academy of Arts and Letters in 2007. He has participated in Documenta (1982, 1978); the Venice Biennale (2003, 1997); and seven Whitney Biennials, most recently in 2008. His work has been shown in more than 120 solo exhibitions and 300 group exhibitions. Baldessari was also awarded the Golden Lion for Lifetime Achievement at the Venice Biennale in 2009. In May 2011, Baldessari was awarded an Honorary Doctorate degree from California College of the Arts.

A major retrospective entitled Pure Beauty, which spans five decades of John Baldessari’s work, toured between 2009 and 2011 through art institutions such as Tate Modern, London, the Museu d’Art Contemporain, Barcelona, and The Los Angeles County Museum of Art, Los Angeles.

The curator, David Kasprzak (MA Curatorial Practice 2011) has completely relinquished the decision-making process, instead inviting the artists in the 101 Collection to select the works themselves. In addition, he delegated his curatorial tasks to colleagues within the Wattis and CCA. The chief preparator, who typically follows the installation plan and instruction of a curator, has installed the exhibition. The institution’s designer has created the graphic identity. All texts have been generated by the institution’s managing editor.

The exhibition is intended as an experiment in structural and organizational strategy, and responds to two questions. Firstly, will a collection of predetermined artworks ultimately produce the same visual and contextual outcome, regardless of the decisions made on a curatorial level? Secondly, what outcome does an exhibition organized by multiple authors working independently of each other produce?