Sublimations. Halfway between the natural and the artificial, sculpture and readymade, science and illusion, Mercier's show plays on our systems of representation, proposing to examine our connection with reality and what happens in the in-between area of that relationship. 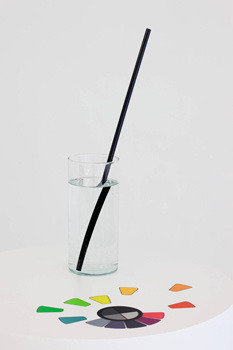 For his first show in France following his 2007 retrospective at the Musée d'art moderne de la Ville de Paris, Mathieu Mercier has assembled for the Centre d'art contemporain d'Ivry – le Crédac a group of recent works that includes several that have never been shown previously.

An uncertain cross between the avant-gardes' project of imbuing the artistic object with practical value, and the Duchampian gesture of lending symbolic value to the object of everyday use, Mercier's work is endlessly redefining the production modalities of objects and their passage in the field of art.

A series of printed white pedestals associates objects having an everyday use with images of measuring tools that are slightly distorted and imprinted directly on these bases. Bananas, for instance, are displayed side by side with a curved color chart, while the image of an exploded chromatic circle is featured with a vase. Selected with great precision, these compositions suggest multiple associations of ideas. Both object and image, they simultaneously assert their materiality and their representational nature, and seem above all to summon the use of our eye and our attention to reality.

In another gallery, a bike, a bench made up of sections of water pipe and an updated, oversized light fixture from the 1950s conjure up an urban scene. Playing on the transformation of standards, this setting reformulates our relationship to the outside world and our way of understanding the forms all around us.

Elsewhere, in a darkened gallery, a diorama, that outmoded system of display, a kind of grand showcase inherited from natural history museums of old, harbors a pair of live axolotls. These animals seem frozen at an intermediary representation of evolution, between water and earth, and the elementary setting around them forces us to face our own archaisms in terms of representation.

Halfway between the natural and the artificial, sculpture and readymade, science and illusion, Mercier's show at Crédac plays on our systems of representation, proposing to examine our connection with reality and in particular what happens in the in-between area of that relationship.

Mathieu Mercier (born in 1970) lives and works in Paris. The winner of the 2003 Marcel Duchamp Prize, he has had numerous solo shows in France and abroad. In 2007 the Musée d'art moderne de la Ville de Paris featured the first retrospective show devoted to his work called Sans titres, 1993–2007 (Untitled Works, 1993–2007). His most recent solo show, A Quarter to Three, was held in 2011 at the Skulpturi Art Center in Copenhagen (Denmark). The artist is represented by the Mehdi Chouakri Gallery (Berlin), Galleria Massimo Minini (Brescia) and the Lange&Pult Gallery (Zürich).