Chance is a new installation by Christian Boltanski specially made for the Frence pavilion at the Venice Biennale 2011. War as Ever! is a project by artists Tracy Mackenna and Edwin Janssen about war journalism, starting point is the Van Kittensteyn album. 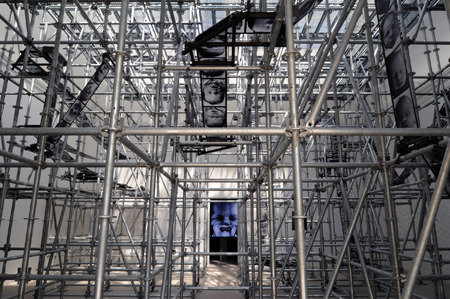 21 jan-26 feb 2012
A new exciting installation by French artist Christian Boltanski. Earlier on show at the Biennale of Venice, now specially adapted for the Fotomuseum for five weeks on show in Rotterdam. Do not miss this!

The installation, titled “Chance“, deals with the themes that are characteristic for Boltanski’s work: chance, luck and misfortune. In the main exhibition space Christian Boltanski installed a large scaffold with a oversize film strip that shows the faces of babies shortly after their birth. The film strip runs at high speed until it randomly stops and picks one of these babies, displayed on an lcd screen. In each of the two side rooms, a large digital clock counts up the world’s population.
Christian Boltanski's Chance was specially made for the Frence pavilion at the Venice Biennale 2011.

War as Ever!
Tracy Mackenna and Edwin Janssen

21 jan-15 mar 2012
War as Ever! is a daring project by artists Tracy Mackenna and Edwin Janssen. Was as Ever! is all about war journalism, starting point is the Van Kittensteyn album. The album dates from 1613, and contains prints and drawings about the Eighty Years’ War. It was composed by Willem Luytsz van Kittensteyn from Delft. It is probably the oldest existing album of history prints.