For Launching Rockets Never Gets Old Hefti sets-up pseudo scientific experiments which challenge industrial fabricators and ultimately divert objects from their original state. The second exhibition will feature a number of Darboven’s large scale serial works which focus on the passage and structuring of time. 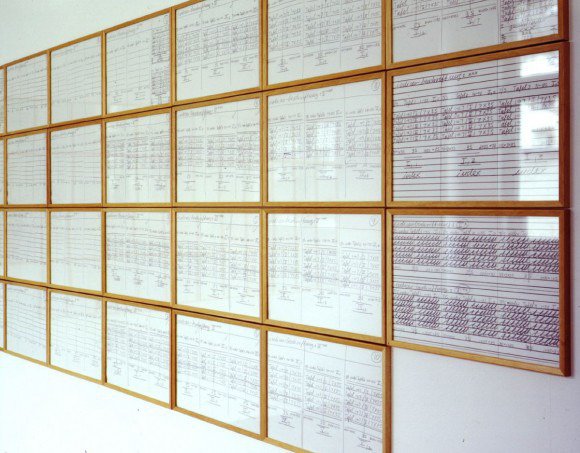 For the past ten years Swiss artist Raphael Hefti has been interfering with material processes, manipulating and transforming different substances to surprising effect. Coming from a technical background with a keen interest in how things are made and what things can do, Hefti sets-up pseudo scientific experiments which challenge industrial fabricators and ultimately divert objects from their original state.

Launching Rockets Never Gets Old will be Hefti’s first solo show in the UK and in this new work he will approach his investigations from a specific tangent: discovering mistakes in industrial processes and pushing them to a limit where aesthetic transformations take place. These processes include Luxar coating which produces ‘museumglass’ (Subtraction as Addition, 2011), and the hardening of steel with extreme temperatures (Replaying the Mistake of a Broken Hammer, 2011). A series of photographs bearing ambiguous patterns is created by the burning the spores of the Lycopodium plant on photosensitive paper.

Hefti completed his MA this year at the Slade School of Fine Art and his recent solo exhibitions include 327 Different Sounds Coalmine Galerie, Winterthur, Switzerland and Beginning with the first thing that comes to mind Fluxia, Milan (both 2010).

This will be the first solo exhibition by German artist Hanne Darboven in the UK. Born in Hamburg in 1941 Darboven studied at the Hochschule für bildende Künste before moving to New York in 1966. During her short time there her work became associated with the beginnings of conceptual and minimal art. She moved back to her family home in 1968 and continued to live and work there among an extraordinary collection of disparate cultural artefacts until her death in 2009. Although her work is largely informed by the principles of these movements there is an intimacy to its production that operates in contrast to an often rigid and regulated appearance.

The exhibition will feature a number of Darboven’s large scale serial works which focus on the passage and structuring of time. These vast installations are formed of hand drawn notations and numbers, musical scores and texts which are sometimes accompanied by images and objects.