2 new works. The artist confronts issues of success and failure, and initiates a conversation about the nature of "shock" by literally attempting to "shock" the audience. 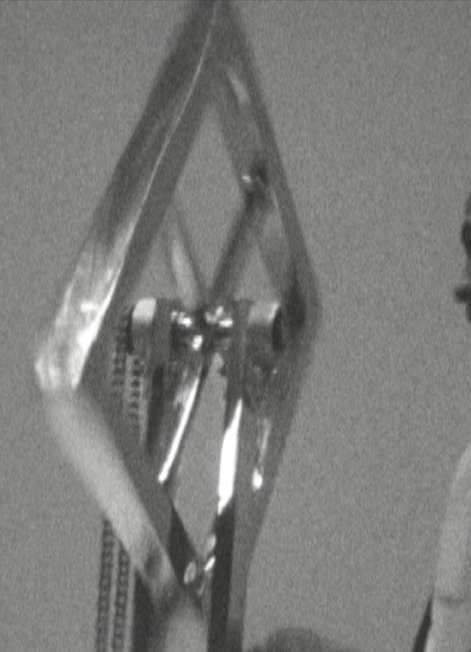 The first work, "The Improbability of Intentionally Creating Shock", is comprised of four individually presented elements constituting an elaborate machine. The artist confronts issues of success and failure, and initiates a conversation about the nature of "shock" by literally attempting to "shock" the audience. The primal intent of the work involves one person, the artist, touching another, the viewer: an electrical and biological exchange of energy. The first element is an exaggerated rubber band acting as power supply and storage of energy. Then there is the anchoring system that fixes the machine to a stable point within the space. The center piece of the apparatus is a 200-pound solid-steel chrome-plated square wheel. The final element is the point at which static electricity interacts with the observer, creating a tickling mild zap, or simply the sense of anticipation. The shock is merely implied and not made explicit, derived from physical form and phenomenon, or lack thereof.

Presented in the smaller gallery, the second work is a temporary room which demonstrates a paradox of time and space. A three-by-five foot representation of the continent of Europe floats in the room. The likeness of the EU is rendered in great detail according to multiple sources of information. The artist trusted established topological maps, images from space (NASA, ESA), as well as instinct and memory. The viewer walks into this room in New York City from 10am to 6pm to encounter the waning of daylight into darkness of Europe, designed to accurately portray the present reality on the other side of the Atlantic.

Eric Wesley was born in Los Angeles, California in 1973, where he continues to live and work. Wesley has held solo exhibitions in galleries internationally as well as at the Museum of Contemporary Art, Los Angeles and Foundation Morra Greco, Naples, Italy. Wesley has participated in group shows at the Hammer Museum in Los Angeles; Musée d'Art Contemporain, Bordeaux, France; Fundación/Colección, Jumex, Mexico; Museo d'Arte, Benevento, Italy; The Prague Biennial in 2007; Institute of Contemporary Art, London; P.S.1, New York; and the Studio Museum in Harlem.