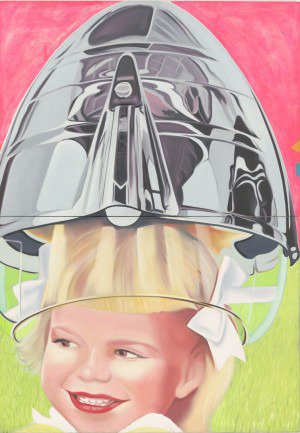 James Rosenquist began to paint the 84-foot-long F-111 in 1964, in the middle of one of this country's most turbulent decades. Inspired by advertising billboards and by earlier mural-scaled paintings, such as Claude Monet's Water Lilies, he designed its 23 panels to wrap around the four walls of the Leo Castelli Gallery at 4 East 77th Street, where it would be displayed the following year. Rosenquist took as his subject the F-111 fighter bomber plane, the newest, most technologically advanced weapon at the time, and positioned it, as he later explained, "flying through the flak of consumer society to question the collusion between the Vietnam death machine, consumerism, the media, and advertising." Its jumps of scale, collage-like juxtaposition of fragments of imagery, and gloriously vivid palette exemplify the style that defines Rosenquist's singular contribution to Pop art in the United States. For this special installation, located outside the entrance to the fourth-floor Painting and Sculpture galleries, F-111 will be presented as it was first exhibited at the Castelli Gallery in 1965. This installation is made possible by BNP Paribas.