This group exhibition balances the elaborate, enigmatic paintings of Bauer and Croxson, with the hypnotic, streamlined sculptures of Lichty and Wood. With intriguing shapes and materials, and odd juxtapositions and references, the works defy, in varying ways, the empty signs of contemporary abstraction. 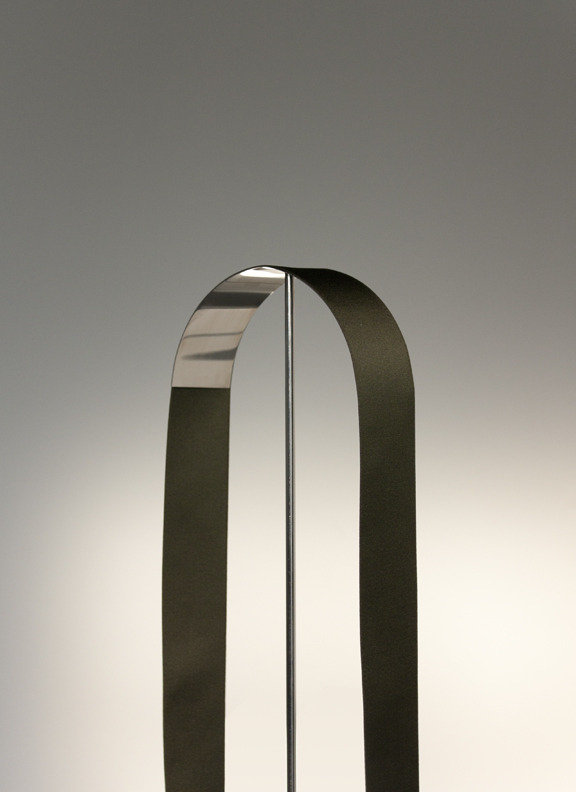 This group exhibition balances the elaborate, enigmatic paintings of Michael Bauer and Joel Croxson, with the hypnotic, streamlined sculptures of Stephen Lichty and Sarah E. Wood. With intriguing shapes and materials, and odd juxtapositions and references, the works defy, in varying ways, the empty signs of contemporary abstraction. Echoing, perhaps, the response of the New Realists to Abstract Expressionism, the artists here generate unexpected experiences for the viewer by inflecting abstraction with poetic and figurative notes.

Michael Bauer’s paintings display marks and icons, floating upon a flat field, that come together as spectral portraits whose roots may lay somewhere in Renaissance or Modernist portraiture. His paintings unleash an array of references that modulate from the unknown and nightmarish, to the recognizable and charming.

Joel Croxson’s meticulous, energized paintings mix patterning, lines, and shapes with fields of color. Conjuring almost, but not quite definable images and actions, they possess the visual logic of a dream: With no easily identifiable reason or direction, they make sense in the moment and then change course. Thwarting literal readings, they open doors to subjective spaces.

Stephen Lichty’s sculptures suspend familiar materials in exquisite, sculptural animation. He contours ribbons using armatures, creating relationships between elements that have a powerful and poetic sense of movement. Held in a fine balance between figure and ground, the works traverse the fault-line between representation and abstraction.

Sarah E. Woods’ elegant, sculptural constructions inject everyday materials with a stark and affective lyricism. Her wall-based work, Untitled (Broken Lines), made from wood, steel, and string, is reminiscent of a waterfall or, perhaps, the digital version of one. The theatricality of its simulated movement is matched by its pared-down gracefulness.

Stephen Lichty (Kansas City, MO, 1983) lives and works in Brooklyn, New York. He holds a BSc from the Department of Culture and Communications at NYU. Exhibitions include: Frutta, Rome (2012); The Barber Shop, Lisbon (2011); and School of Development, Berlin (2010). Performances include: Ribbon dance in a thunderstorm at sunset, Socrates Sculpture Park, New York (2011). Publications include: Special Effects, Advances in Neurology, re-release with Neil Marcus and Publication Studio (2011); and Alexander, Bell, Cooper, McCracken, Valentine (1971), re-release with Publication Studio (2010).