The New York Journalism of Djuna Barnes, 1913-1919 in the Elizabeth A. Sackler Center for Feminist Art is an exhibition of 45 objects including drawings, works on paper, documentary photographs, and stories in newsprint by the celebrated writer and early twentieth-century advocate for women's rights Barnes. 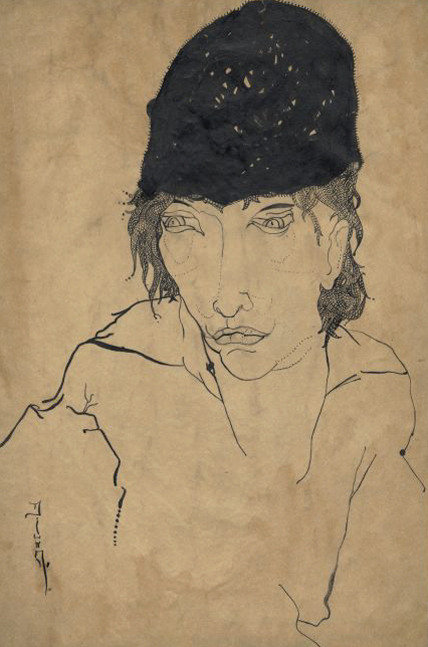 Newspaper Fiction: The New York Journalism of Djuna Barnes, 1913–1919, an exhibition of 45 objects including drawings, works on paper, documentary photographs, and stories in newsprint by the celebrated writer and early twentieth-century advocate for women’s rights Djuna Barnes (American, 1892–1982), will be presented in the Herstory Gallery of the Elizabeth A. Sackler Center for Feminist Art from January 20 through October 28, 2012. Among the works on view will be eight illustrations Barnes composed to accompany her newspaper columns.

The Herstory Gallery is devoted to the remarkable contributions of the women represented in The Dinner Party by Judy Chicago, on permanent view in the adjacent gallery. Barnes is one of 1,038 women honored in Chicago’s iconic feminist work.

Prior to publishing the modernist novels and plays for which she is now remembered, such as Ryder (1928), Nightwood (1936), and The Antiphon (1958), which present complex portrayals of lesbian life and familial dysfunction, Barnes supported herself as a journalist and illustrator for a variety of daily newspapers and monthly magazines, including the Brooklyn Daily Eagle, McCall’s, Vanity Fair, Charm, and the New Yorker. Brought up in an unconventional household, Barnes developed an outsider’s perspective on “normal” life that served her well as a writer. Her liberal sexuality fit in perfectly with the bohemian lifestyle of Greenwich Village and, later, the lesbian expatriate community in Paris. From her first articles in 1913 until her departure for Europe in 1921, Barnes specialized in a type of journalism that was less about current events and more about her observations of the diverse personalities and happenings that gave readers an intimate portrait of her favorite character—New York City. Attempting to capture its transition from turn of the century city to modern metropolis, Barnes developed her unique style of “newspaper fictions,” offering impressionistic observations and dramatizing whatever she felt to be the true significance or subtexts of a story.

Newspaper Fiction: The New York Journalism of Djuna Barnes, 1913–1919 is organized by Catherine Morris, Curator of the Elizabeth A. Sackler center for Feminist Art, Brooklyn Museum.

Brooklyn Museum
200 Eastern Parkway - New York
Museum Hours:
Wednesday and Friday, 11 a.m. to 6 p.m.; Thursday 11 a.m. to 10 p.m.; Saturday and Sunday, 11 a.m. to 6 p.m.; first Saturday of each month, 11 a.m. to 11 p.m. Closed Thanksgiving, Christmas, and New Year’s Day.
Admission:
Contribution $12; students with valid I.D. and older adults $8. Free to Members and children under 12 accompanied by an adult. Group tours or visits must be arranged in advance by calling extension 234.