Chinese Art in an Age of Revolution. After an introductory section featuring a rare group of Fu's earliest extant works in the manner of traditional Chinese masters, the exhibition will present an in-depth examination of some of his finest works from the early 1940s. 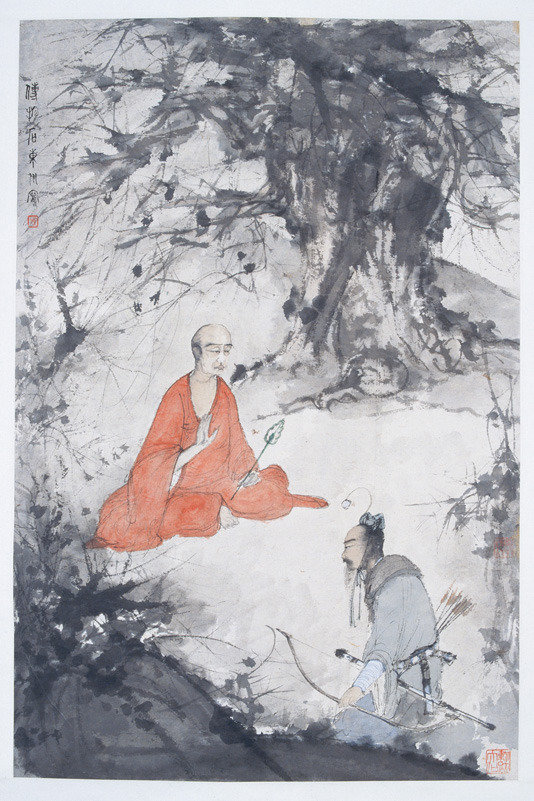 
The Metropolitan Museum of Art will present a retrospective of works by Fu Baoshi, one of the most renowned modern artists in China, beginning January 21, 2012. Drawn primarily from the preeminent holdings of China’s Nanjing Museum, Chinese Art in an Age of Revolution: Fu Baoshi (1904-1965) will showcase the artist’s 40-year career with some 70 paintings and 20 seals that have never been shown outside Asia. These works will chronicle Fu’s stylistic evolution from his student days in China and Japan to his life in the wartime capital in Sichuan, and through his career as one of the favorite artists of Chairman Mao. The exhibition, augmented by superb works from a private New York collection, offers the most comprehensive treatment of the artist’s oeuvre ever presented in the West. A notable highlight will be the inclusion of a draft of Fu’s most famous commission—the vast landscape panorama he created in 1959 for the Great Hall of the People in Beijing, China.

About the Artist
Perhaps the most original figure painter and landscapist of China’s modern period, Fu Baoshi created indelible images celebrating his homeland’s cultural heritage while living through one of the most devastating periods in Chinese history. He was eight years old in 1912 when China’s last imperial dynasty was overthrown and the Chinese Republic was established. He subsequently witnessed the divisive warlord era and Communist rebellion of the 1920s, the Japanese invasion and occupation of eastern China from 1937 to 1945, and the Communist Revolution and establishment of the People’s Republic of China in 1949. Over the last 15 years of his life, his art reflected China’s political transformation under Mao Zedong. Throughout his career, however, Fu remained one of China’s great individualist masters.

Fu’s Painting Styles
Trained in both China and Japan at a time when arts education stressed the need for the modernization of indigenous traditions through the study of Western methods, Fu developed a new style incorporating foreign styles and techniques, and began creating boldly individualistic and strongly nationalistic work. Noting that Chinese painting had evolved toward too great a dependency on monochromatic, calligraphic brushwork, Fu sought to revive earlier traditions of realistic description that made greater use of color and ink wash. He also stressed the need for an artist to be emotionally and physically present in his art. To achieve this end, Fu often painted while inebriated. He also sought spontaneity through a spattered-ink method of painting—a kind of “action art” that parallels the working methods of some of the Abstract Expressionists.

The Exhibition
After an introductory section featuring a rare group of Fu’s earliest extant works in the manner of traditional Chinese masters, the exhibition will present an in-depth examination of some of his finest works from the early 1940s. On view in this section will be Qu Yuan (1942), depicting the poet Qu Yuan (343-278 B.C.), who committed suicide to prove his loyalty; and Drunken Monk (1944), a portrait of Huaisu (725-c.799), a Buddhist monk known for his “wild cursive” calligraphy who, like Fu, is said to have done his best work while inebriated. Both works reflect Fu’s use of art to mirror his own state of mind and feelings.

During the war years from 1942 to 1945, Fu revived the millennium-long monumental landscape tradition to evoke the grandeur of China’s towering mountains and surging rivers. Whispering Rain at Dusk (1945) exemplifies Fu’s unrivaled ability to achieve rich and often brooding atmospheric effects through layered applications of ink wash suffused with pale color.

The remainder of the exhibition will be devoted to works of art created after the founding of the People’s Republic of China in 1949. This part will offer an insight into how Fu sustained his creative vision while adapting his art to the socialist agenda of Mao Zedong’s New China. While he never adopted Soviet-style Social Realism, a group of works that Fu painted in 1957 during a study trip to Eastern Europe shows him applying his spontaneous ink-wash style to the depiction of aerial trams, factory towns, airplanes, and a flotilla of naval vessels.

The Far Snows of Minshan Make Us Happy (1953), a bold image of soldiers enduring the hardships of the legendary Long March as they traversed the Min Mountains of Sichuan in 1935, is an example of the kind of image Fu was required to paint celebrating the history of the Party after the Communist Revolution of 1949.

During the final decade of his life, Fu drew inspiration from two sources that were beyond reproach—the poetry of Mao Zedong and China’s natural scenery. His success in interpreting both led to the most important commission of his career: a vast landscape panorama for the Great Hall of the People that had to be completed by October 1, 1959, in time for the 10th anniversary of the founding of the People’s Republic. Such is the Beauty of our Rivers and Mountains (1959?), a preliminary draft for the monumental painting, is a highlight of the exhibition.

From this time forward, Fu often enhanced the political content of his images through the simple device of adding a red flag or a glowing red sky. The exhibition will include Heaven and Earth Glowing Red (1964), depicting a red globe floating over the ocean, which romanticizes the vision of Communist world domination. Also on view will be Jinggang Mountain (1964), presenting a powerful image of a mountain known also as the “birthplace of the Red Army and the cradle of the Communist Revolution.” But even when the subject matter of his paintings reflects the utilitarian and propagandistic roles that art was required to play, his dramatic ink-wash style and bold compositions remain highly personal interpretations.

Education Programs
The February 5 Sunday at the Met will focus on the artist Fu Baoshi with an overview of the exhibition by Maxwell K. Hearn, Douglas Dillon Curator in Charge, Department of Asian Art, and a lecture by Aida Yuen Wong, Associate Professor of Fine Arts, Chair of East Asian Studies, Brandeis University exploring how Baoshi’s experience in Japan shaped his art. Several gallery talks will be offered in conjunction with the exhibition, and on Saturday, January 28, as part of the Met’s Lunar New Year Festival, visitors of all ages will explore the relationship between poetry and painting during a drop-in drawing workshop in the exhibition gallery.

The exhibition is accompanied by a fully illustrated catalogue prepared by the Cleveland Museum of Art.