Experiments with the Magyars

Associations of Identity across Geographies: exhibition and film screening curated by the Clark House Initiative. The show lays out a contemporary history of Hungary through the absurdist commentary of Jozsef Ze Kovacs's graphic prints. Videos by artists of the FKSE (Studio of Young Artists Budapest) discuss minority culture within national identity as it traverses the European Union. 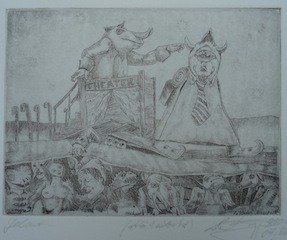 The exhibition lays out a contemporary history of Hungary through the absurdist commentary of József Zé Kovács's graphic prints. Videos by artists of the FKSE (Studio of Young Artists Budapest) discuss minority culture within national identity as it traverses the European Union. Associations of identity that exceed the nation, such as cultural practices, or the experience of exclusion or displacement, across distant geographies of the world are explored: through the ritual of the maticoor from Bihar to the Caribbean in the work of Shambhavi Singh, the ubiquitous culture of global brands in the bottle-cap sarees of Sharmila Samant, in works from Tushar Joag's reversal of the historic travels of Fa-Hien and Hiuen Tsang, and in the commonalities of culture between the Romani of Europe and the Banjaras of India through two archives. Peti is a curated sculpture of prints, the word for the Indian harmonium and the Romani accordion, taking the shape of the instrument, and coming out of a workshop made with the artist Liz Ballard and artists of the Sir JJ School of Art.

Hungarian Information and Cultural Centre founded in 1978 is located on Janpath, in the heart of the city. It is the only Hungarian cultural centre in Asia. The building is also known as Baikunth, and is an important Edwin Lutyen mansion. The cultural relations between India and Hungary dated back to a famous Hungarian travellers, scholars and explorers who reached India as early as in the 18th century. János Honigberger, had come from Transylvania, was the court doctor of the famous Maharaja Ranjit Singh. Alexander Csoma de Kőrös made the first Tibetan-English dictionary in India. Amrita Sher Gil, an artist, born to a Hungarian mother and an Indian father in Budapest, is considered a pioneer of the modern art movement in India. Many Hungarian artists have lived in India, and their works form the centre's permanent collection.

Clark House Initiative is a curatorial practice about a place, which in sharing a junction with two museums and a cinema, mirrors the fictions of what these spaces could be. Clark House is also an old shipping office of the Thakur Shipping Company that had links to countries in the Middle East, Eastern Europe and Japan. Curatorial interventions hope to continue, differently, this history of internationalism, experiment and research. It was established in 2010 as a curatorial collaborative practice based in Bombay. www.clarkhouseinitiative.org - info@clarkhouseinitiative.org | 09820213816

Sumesh Sharma is a curator with the Clark House Initiative in Bombay. His practice is informed by cultural perspectives of political and economic history. Histories of communities in India, language religion and politics in Francophone Africa, and immigrant identities in Europe, form part of his research. In 2008 he graduated from the Universite Paul Cezanne, Aix-en-Provence where his masters thesis inquired into the emergence of leadership among contemporary art practitioners. He was part of the second edition of the Gwangju Biennale International Curators Programme 2010 in South Korea. In 2011 he curated the 5th Ayodhya Film Festival, Simon Liddiment, Published in Dissent Pune, and co-curated the Studio of AA Raiba, Auguries - JJXXI, Student Exhibition of Sir JJ School of Art, Padmini Chettur - Untitled Exhibition # 1, Mohsen Rastani, and the Sabavala Portfolio.

Zasha Colah is a curator at the Clark House Initiative interested in cultural sovereignty and projects that encourage collaborative art practice. She co-founded blackrice in 2008 in Nagaland, and the Clark House Initiative in Bombay in 2010. She wrote about political readings of the decorative within the Pan-Asian movement while studying art history at Oxford University and about how art from the Naga Hills of Nagaland, Manipur and Myanmar addresses injustice while studying curating at the Royal College of Art, London. She was the curator of modern Indian art at the Jehangir Nicholson Art Foundation at the CSMVS museum (2008 to 2011), and at the National Gallery of Modern Art (2004-2005) in Mumbai. Her most recent curated project was 'Against AFSPA' at the National Gallery of Modern Art in Mumbai.

FKSE Budapest The Studio of Young Artists is a professional organisation, which has been functioning for more decades always giving dynamic responses to current art and social issues. The association has a membership of about 350 artists, art historians, and critics. The objective of the association is to facilitate the emergence and the work of its members in the cultural and artistic life. We foster the establishment of professional contacts, our members’ presence in Hungarian and international exhibitions and residencies, and we provide them with information and organizational support. The association also helps Hungarian and foreign curators and artists to get in contact with the young Hungarian art scene and to build collaborations.

Sari Stenczer is a young Hungarian curator based in Budapest. She is a board member of the Studio of Young Artists Association. She curates thematic group shows in diverse media, concentrating on the subject of social criticism and the present situation of Hungary, as well as more general problems of today's society. Some of the projects that she has curated include *openair*opensource* - Projection of Contemporary Hungarian Videos in Paris 2010, and Souffle d'Orient, Center Pompidou in 2008, and was curator of the Hungarian section of the Jeune Création Européene - Salon Itinérante de l'Art Contemporain of the Montrouge Biennale in 2009-10 and 2011-12. She received the Ile de France scholarship and completed a course on contemporary art curatorship at Paris IV. Sorbonne University in 2005-2006, and is a grantee of the Ernő Kállai Grant for Art Critics in Hungary.

Sir JJ School of Art Printmaking Studio is one of the first print studios in India and one of the oldest studios in Asia. The studio is situated in a foundry within the School of Art to make decorative metal castings for the building of the Victoria Terminus - today the most splendid and busiest railway terminus in Bombay. Professor YC Shukla, returning from France, brought with him myriad techniques of printmaking and introduced a hobby class at the School of Art. Printmaking was introduced as a subject in 1962 after ten years of it having been taught at the college. Anant Nikam is the head of the printmaking studio in which he has taught for 23 years.

European Roma Cultural Foundation (ERCF) is an independent non-profit foundation registered on the 2 August 2010 in Budapest, for a future world of artistic and cultural diversity where Roma arts, culture, history and language are equally valued and respected; and the power of artistic creation and education, especially that of young people, is essential for changing negative stereotypes towards people of Roma origin in the enlarging Europe and beyond. The new body operates under an independent budget provided by the founder Ildikó Sárközi and the founding director Tímea Junghaus of ERCF.

Tímea Junghaus is an art historian and contemporary art curator of Romani origin. She is author and co-editor of the comprehensive publication on European Roma visual art, Meet Your Neighbours – Contemporary Roma Art from Europe (2006). She was curator of the First Roma Pavilion at the 2007 Venice Contemporary Art Biennale. She is currently concluding her PhD studies in Film Media- and Cultural Theory at the Eötvös Lóránd University of Human Sciences. Since 2010 she is employed as a researcher of the Institute for Art History, at the Hungarian Academy of Sciences. Junghaus received the Kairos, European Cultural Prize in 2007, and since than she is the founding director of the European Roma Cultural Foundation ( www.romacult.org ) a Budapest-based independent NGO.

Sarolta Péli is a young art historian, she majored in Art History and German. As a cultural manager she organizes exhibitions, helps prepare documentary films and manages youth workshops. In 2007 as a co-founder she started the shortfilm festival EUShorts in Budapest. In 2011 she curated "New Media In Our Hands" an exhibition presenting Roma artists from Central and Eastern Europe.