24 hours Museum. Vezzoli's one-day show for Prada. An ephemeral museum conceived by Francesco Vezzoli in collaboration with AMO, the kaleidoscopic off-shoot of the OMA/Rem Koolhaas architecture studio. 24 h Museum opens on January 24 - for 24 hours only - at the historical Parisian Palais d'Iena, designed by Auguste Perret between 1936 and 1946, currently the house of the French Conseil Economique, Social et Environnemental. 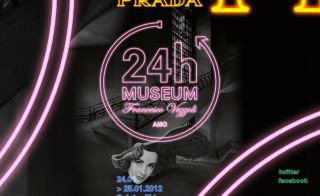 Prada presents the "24 h Museum", designed by Francesco Vezzoli with AMO, Rem Koolhaas' think tank. The "24h Museum" opens in Paris on Tuesday 24 January for 24 hours only, till Wednesday 25 January, in the historic Palais d'Iéna, the building designed by Auguste Perret between 1936 and 1946, today home of CESE (Conseil Economique, Social et Environnemental), the French 'third Chamber'.

AMO's installation for the "24 h Museum" is divided in three sections, each inspired by a particular type of museum space: historic, contemporary and forgotten. The three sections are instrument to the sequence of events that take place during 24 hours in different areas of the ground floor of the Palais d'Iéna. The central space is a large metal cage made from grills and neon lights that encloses the work by Francesco Vezzoli.

In the three sections – historic, contemporary and forgotten – Vezzoli is creating a "non-existent museum" where he shows his personal tribute to the eternal allure of femininity through interpretations of classical sculptures that make reference to contemporary divas. "They are my icons turned into sculptures and placed on marble pedestals".* At the top of the stairway, epicentre of the building, Vezzoli is placing a majestic sculpture of a female, reinterpreted with the features of a mysterious goddess. Vezzoli's vision is of a museum that exists for just 24 hours and which is also a celebration of a collective rite that mixes visitors, red-carpet, Oedipus' complex and night visions.

With the new "24 h Museum", Francesco Vezzoli is continuing his exploration of reciprocal influences and boundary-breaking in the visual arts, cinema and theatre that he has already investigated in the performance in which Veruschka did petit-point embroidery at the Venice Biennale in 2001, the Democrazy video in which Sharon Stone and Bernard-Henri Lévy represent themselves as characters of a fictitious political campaign for an hypothetical presidential election (Venice Biennale, 2007), and in Lady Gaga's performance at the MOCA in Los Angeles in 2009 when she played a live tribute to Diaghilev.

In its tradition of working with artists and making multiple approaches to the creative process – with a unique capacity to embrace utopias like The Double Club (London, 2008–09) and the Prada Transformer (Seoul, 2009) – Prada realizes with Francesco Vezzoli a new project of visual and linguistic experimentation in the "24 h Museum", a Baroque festival in which the entire exhibition lasts only 24 hours.

A conversation on this project between HUO and FV will also be included in the brochure published for the opening of the "24Hours Museum".