9 Scripts from a Nation at War

This 10-channel video installation marks the first work for which artists Andrea Geyer, Sharon Hayes, Ashley Hunt, Katya Sander, and David Thorne have collaborated. The work responds to knowledge production and communication in the context of the Iraq war since the initial invasion by U.S. military forces in March 2003. 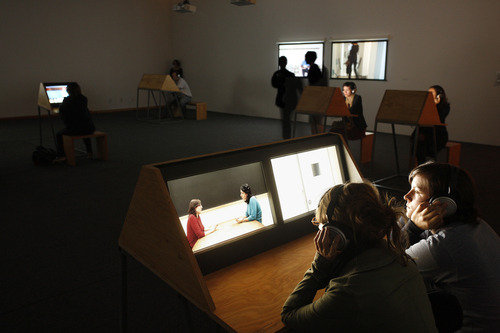 The Museum of Modern Art presents 9 Scripts from a Nation at War, a 10-channel video installation, recently acquired by MoMA, which is on view in The Yoshiko and Akio Morita Gallery from January 25 to August 6, 2012. The multilayered installation by Andrea Geyer, Sharon Hayes, Ashley Hunt, Katya Sander, and David Thorne responds to conditions and questions that have arisen since the invasion of Iraq by U.S. military forces in March 2003. It was created in 2007 as a collaborative project for Documenta 12, a major international exhibition in Kassel, Germany, launched after World War II to foster the renaissance of international modern art. The work is structured around a central concern: the specific roles constructed by war that individuals fill, enact, speak from, or resist. 9 Scripts from a Nation at War is organized by Sabine Breitwieser, Chief Curator, with Martin Hartung, Curatorial Assistant, Department of Media and Performance Art, The Museum of Modern Art.

Displayed as projections and at seated viewing stations in a circuitous, non-narrative structure, each of the 10 videos shows a different perspective on the involvement of U.S. troops in global war zones—represented by the roles of Citizen, Blogger, Correspondent, Veteran, Student, Actor, Interviewer, Lawyer, Detainee, and Source. The scripts are enacted by both actors and non-actors alike; some of them speak their own words, while some recite the words of others. The extensive archive of video performances addresses the implications of war for individual and collective experience and the role of language in structures of power during times of conflict. The installation allows for a holistic reading in which connections can be drawn across the different performances as visitors move freely through the work.

While also working on individual projects, Andrea Geyer (German, born 1971), Sharon Hayes (American, born 1970), Ashley Hunt (American, born 1970), Katya Sander (Danish, born 1970), and David Thorne (American, born 1960) have collaborated in several constantly shifting multidisciplinary formats over the last decade. Inspired by practices from theater, film, anthropology, linguistics, and journalism, the artists have primarily worked in video, performance, and installation. Portions of the presented videos were shot during a Vera List Center Fellowship. The production of the work was supported by the Vera List Center for Art and Politics at The New School, New York.

PUBLIC PROGRAMS:
Modern Mondays
Monday, April 30, 2012
“What motivates artists to engage in a debate on war?” Modern Mondays, an ongoing program that brings contemporary, innovative film and moving-image works to the public, provides a forum for viewers to engage in dialogue and debate with contemporary filmmakers and artists. On April 30, a conversation will be held with Andrea Geyer, Sharon Hayes, Ashley Hunt, Katya Sander, and David Thorne. Sabine Breitwieser will moderate.
Tickets: $10 adults; $8 seniors, 65 years and over with I.D. $6 full-time students with current I.D.

Organized by the Department of Film and the Department of Media and Performance Art. Modern Mondays is made possible by Anna Marie and Robert F. Shapiro. Additional support is provided by The Contemporary Arts Council of The Museum of Modern Art.