Choirs, the Sublime and the Exegesis of Being: In terms of narrative, Guido van der Werve, Sven Johne and Artur Zmijewski take an adventurous and experimental approach to choirs and to music as human passion. Such issues as irrationality, the grotesque and the comic play an ingenious part in this. Katleen Vermeir and Ronny Heiremans present The Residence (a wager for the afterlife). Their new video installation focuses on the artist as entrepreneur in a global society that qualifies economy as the single measure of things. 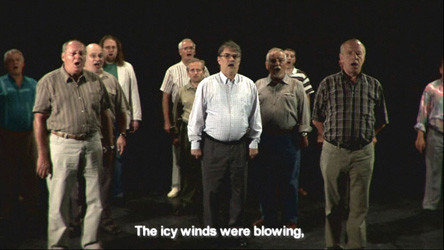 Choirs, the Sublime and the Exegesis of Being

The confrontation with the sublime and the exegesis of being provide the thematic substrate of the Cantemus group exhibition. Starting out with the motif of the choir, vocal excerpts from Mozart’s Requiem, the song Brunnen vor dem Tore from Schubert’s Winterreise cycle and Bach’s cantata Herz und Mund und Tat und Leben, the program of the exhibition examines such aspects of life as destiny and divine judgement, sometimes realistically and sometimes ironically.

As a group that embodies the ties between the individual and the community, the choir is a fitting instrument for this. But in this case it is not employed in a traditionally dramaturgical sense, by providing commentary or personifying a collective conscience. In terms of narrative, Guido van der Werve (1977), Sven Johne (1976) and Artur Żmijewski (1966) take an adventurous and experimental approach to choirs and to music as human passion. Such issues as irrationality, the grotesque and the comic play an ingenious part in this.

Allegorical landscapes and the use of the Rückenfigur in Guido van der Werve’s Number four: I don’t want to get involved in this, I don’t want to be part of this, talk me out of it (2005) make it pictorially indebted to Romanticism. But, by inserting unexpected incidents of slapstick, this meditation on death, solitude and the absurdity of life refers just as much to the work of the very prematurely deceased conceptual artist Bas Jan Ader. Sven Johne’s Wissower Klinken (2007) at first allots a prominent place to the voiceover, after which a chorus of twelve nature guides pay tribute to their colleague Klaus Bartels, who was fatally stuck by a falling rock. Since his passing, they have ruminated on the questions ‘Were higher powers involved?’ and ‘Is this wrath or punishment?’ Artur Żmijewski’s Singing Lesson 2 (2003) is all idiosyncratic sublimity. In the Thomaskirche in Leipzig, where Johann Sebastian Bach was appointed cantor and where he is buried, a choir of deaf children performs a cantata. With the accompaniment of professional musicians, this results in a unique combination of cacophony, contrapuntal rigour and perfectly timed ritornellos. As is typical of Żmijewski’s work, this moving social experiment is larded with plenty of societal undertones, such as the church’s historical refusal to give communion to the deaf. For the exhibition, the Slovenian artist Tobias Putrih designed seating for the audience that combines the forms of the ladder and the arena.

In 2006 Katleen Vermeir (1973) and Ronny Heiremans (1962) initiated A.I.R. (’artist in residence’), a collaborative practice that examines the dynamics between art, architecture and economy. The practice encapsulates different projects, one of which defines their private habitat as an artwork. Working reflexively, the artists use their loft apartment in Brussels as source material, producing ’mediated extensions’ of their domestic space. Vermeir & Heiremans use A.I.R. as a platform for collaborating with a variety of people. This approach led to research-based video works like The Good Life, that was commissioned by Arnolfini, Bristol in 2009 and later became part of the Argos collection. This video is a meditation on the inextricable relationship between art, real estate, art institutions and the wider structure of the economy, harnessed today by the ’creative class’.

Their new video installation The Residence (a wager for the afterlife) (2012) focuses on the artist as entrepreneur in a global society that qualifies economy as the single measure of things. The work relates to Faust II, in which Goethe presents Faust as a project developer. Conceived during an extended residency in China (2009-10), the project initiated a collaboration with the Chinese artist/architect Ma Wen. Sharing insights on the creative clusters concept, Vermeir & Heiremans documented his practice as a cultural producer. The Residence features Ma Wen and two fictional characters. One is Hilar, a very wealthy investor who commissions the Chinese architect to develop a house for his afterlife. Through Hilar a world of economic fetishism opens up. The other one – the Mysterious Woman – is a rather allegorical character, enveloping a dozen roles, all of them performed by one actress. Appearing not only as assistant in Ma Wen’s office but also as the embodiment of all women in Hilar’s world, her multiplicity aligns with the financial market’s shiftiness. Vermeir & Heiremans collaborated closely with Ma Wen, and with British sound artist Justin Bennett. Apart from the soundscape, the artists also commissioned the latter to design an algorithm that is linked to the currency & gold market and that generates a never ending edit of the Hilar footage.

Parallel to the inaugural presentation of the video installation The Residence (a wager for the afterlife) in Argos, Vermeir & Heiremans present The Residence (reading room), a discursive platform set up in close collaboration with Extra City Kunsthal Antwerpen.