Brain Activity. Trained as a fine artist, his deliberately crude graphic style gives his work an immediate and accessible appeal, while simultaneously offering insightful commentary on the absurdities of human relationships. This exhibition, his first major survey show in London, will cover with 175 works the full range of Shrigley's diverse practice. This extends far beyond drawing to include photography, books, sculpture, animation, painting and music. 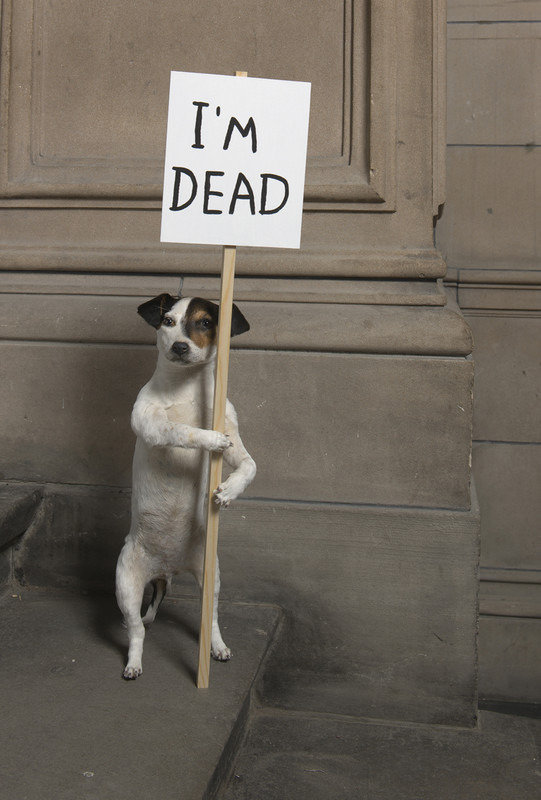 This February, the Hayward Gallery will present the first major survey in the UK of works by David Shrigley. Spanning the upper galleries, David Shrigley: Brain Activity, will cover the full range of Shrigley‟s diverse practice from the past two decades of the artist‟s career, including drawing, animation, painting, photography, taxidermy and sculpture. The exhibition will feature some 175 works, the majority of which are new or never before shown in the UK.

David Shrigley is best known for his pared down drawings and animations that make witty and wry observations on a range of familiar social subjects and everyday situations. Deliberately amateurish and crude, they have an immediate and accessible appeal, while offering insightful commentary on the absurdities of life, death and everything in between. Since graduating from the Glasgow School of Art in 1991, Shrigley has produced more than 7000 works on paper exploring everything from the mundane to the sublime through text and image. For this Hayward Gallery exhibition, he will present some 80 drawings never before seen in the UK, plus around 45 larger new paintings on paper. Shrigley also presents a brand new animation, which will be shown alongside a selection of existing films including New Friends (2009) – an ironic twist on peer pressure – as well as Sleep (2009), Light Switch (2007) and Ones (2009), in which the use of repetition brings familiar behaviour into view. Dr Cliff Lauson, Curator, Hayward Gallery said: “David Shrigley: Brain Activity for the first time brings together two decades of selected artworks from one of Britain‟s most witty and amusing artists Shrigley‟s acute sense of humour brings to life all of his works which range from taxidermied animals to his well known drawings.”

The exhibition will showcase the full diversity of the artist‟s sculptural work, including new works and interventions that respond to the Hayward Gallery‟s spaces. Ranging from hand-crafted sculptures made out of unusual materials, to larger series and installations, including 12 Large Eggs (2011), Insects (2007) and Black Boots (2010), many of Shrigley‟s sculptures are characterised by their odd scale, lending the works a strange, uncanny edge. Death and the macabre are recurrent themes in Shrigley‟s work, treated with the same deadpan humour as the everyday. His work Gravestone (2008) is inscribed with a mundane shopping list, while his taxidermied works include a puppy holding up a sign reading „I‟m Dead‟ and a series of headless animals ranging in size from squirrel to ostrich. The exhibition will also feature a specially commissioned steel gate integrating with the Hayward Gallery‟s architecture, and a new work displayed on one of the Hayward Gallery‟s sculpture terraces.

Other exhibition highlights include a large-scale in-situ wall painting as well as a set of bronze weapons, Swords and Daggers (2010). An early work, The Contents of the Gap between the Refrigerator and the Cooker (1995), is a colorful strip that, upon closer inspection, reveals itself to be a pile of miniature plasticine creatures. Additionally, a well-known series of photographs feature discreet interventions that the artist has orchestrated in various landscapes and interiors, injecting comedic irony to otherwise everyday banal imagery. Often extremely funny, these are the sort of scenarios you never come across in real life, but wish you did, such as River for Sale (1999) and Lost (1996), which depicts a paper note on a tree calling out for a lost pigeon.

Coinciding with Southbank Centre‟s annual Imagine Festival for children (13 – 26 February), Shrigley will also present his animation The Letter (2009) which will be projected onto the exterior of the Royal Festival Hall from dusk each day. The animation, which has never been shown in the UK, depicts an anonymous hand writing a letter of absence to Mrs Teacher. Also coinciding with the exhibition, Southbank Centre will present the London premiere of Pass the Spoon (5 & 6 May, Queen Elizabeth Hall), a „sort-of opera‟ by David Shrigley, composer David Fennessy and director Nicholas Bone, featuring singing vegetables, a giant butcher, an ambitious banana and a panic-stricken pair of celebrity chefs. David Shrigley: Brain Activity is curated by Dr Cliff Lauson, Curator, Hayward Gallery, and will be accompanied by a fully illustrated catalogue featuring an interview with the artist by writer Dave Eggers and essays by artist Jonathan Monk, Martin Herbert and Cliff Lauson. Included with the catalogue, is an exclusive 7-inch picture disc with two new spoken word tracks created specifically for the book and presented in exclusive screen-printed packaging.

David Shrigley (b.1968) lives and works in Glasgow. He has had solo exhibitions at international venues including UCLA Hammer Museum of Los Angeles, Kunsthaus Zurich, Malmo Konsthall, Museum Ludwig, Camden Arts Centre and the CCA Glasgow. His work was featured weekly in The Guardian from 2005 to 2009 and he has had a number of books of his work published, most recently the retrospective What the Hell Are You Doing?:The Essential David Shrigley. He collaborated with animator Chris Shepherd on the film Who I am and What I Want in 2005. Worried Noodles, a CD released in 2007, features settings of the lyrics from his book Worried Noodles – the Empty Sleeve by artists as diverse as David Byrne, Franz Ferdinand and TV on the Radio. In the lower galleries of the Hayward Gallery the first major UK survey show exhibition of British artist Jeremy Deller will open on 22 February 2012 and run until 13 May 2012.