'Space, Body, Language' features photographs and film documentations of stage works, notebooks, dance scores, scripts, movie and exhibition posters of Yvonne Rainer's work. She created surprising choreographies in which she impressively developed an entirely independent language of expression marked, among other things, by the extension of dance to include everyday gestures and activities. In the 'Enduring Value? - Art-Critical Journalism: Its Durability and Decay' exhibition, the cooperation between the journal 'springerin - Hefte fuer Gegenwartskunst' and kub Arena explores what specific spaces each creates and how these are used. 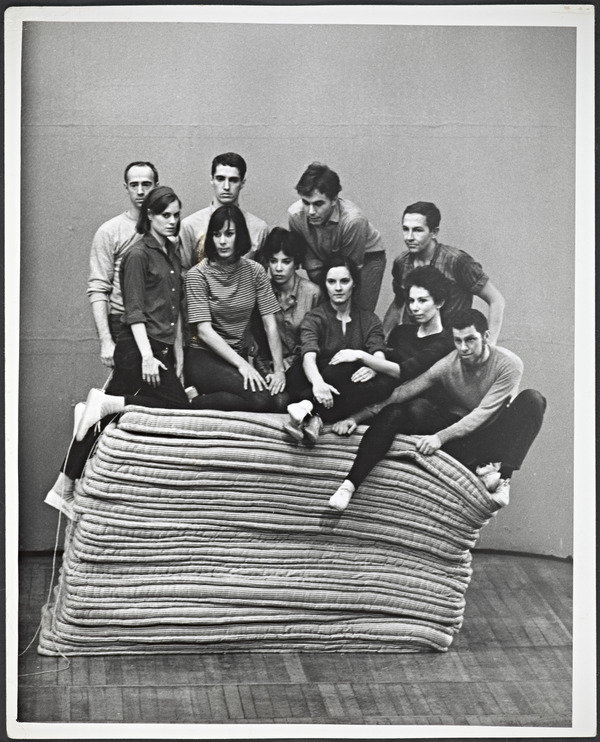 Yvonne Rainer, who is being presented by the Kunsthaus Bregenz in cooperation with the Museum Ludwig in Cologne and the Getty Research Institute in Los Angeles, is one of the most vibrant art personalities of the 20th–21st centuries. Even today Rainer’s artistic production is not easy to classify adequately, for the established categories such as choreographer, dancer, theoretician, activist, poet, and filmmaker only approximately embrace her influential and many-sided activities. They say nothing as yet about their mutual interrelations, a feature that is so typical of Rainer’s creative work.

Born in San Francisco in 1934, Yvonne Rainer had already moved to New York by 1957 to study dance with the leg- endary Martha Graham and the early Merce Cunningham. She would later distance herself from their influence, however, as her interest in Martha Graham’s expressive dance and in Cunningham’s emphasis on improvised and combined chance operations progressively waned. Her experiences with the dancer Anna Halprin and with Robert Dunn, a musician who studied under John Cage, and the friendships that she formed there with Trisha Brown, Elaine Summers, Steve Paxton, and David Gordon eventually led to the founding of the Judson Dance Theater in New York. Interested laypeople – often from the visual arts or the music, film, or poetry scenes – worked together with contemporary dance professionals in this hub of the New York avant-garde scene. Both personally and professionally, Yvonne Rainer already had close contact here with visual artists, some of whom such as Carl Andre, Robert Morris, or Robert Rauschenberg were involved in her dance pieces, as dancers or in some other capacity.

This was the era of the hybrid art forms of Fluxus and Happening. Yvonne Rainer created surprising choreo g- raphies in which she impressively developed an entirely independent language of expression marked, among other things, by the extension of dance to include every- day gestures and activities. Her legendary comparison of minimal sculpture and dance, which she herself also questioned at the time, showed vividly just how close the practice of avant-garde visual art and dance were in the 1960s. The scaling of the work to the human body, deliberate repetition, and the avoidance of strategies of overwhelmment are some of the major points of com - parison that she stressed in this connection, premises that are already conspicuous in one of her early works now considered a milestone of postmodern dance: Trio A (1966). Later incorporated in her evening-length dance program The Mind Is a Muscle, this short work lasting only five minutes appeals on account of the reduction of its move- ments and the simultaneous technical prowess and understatement of their execution. Additional features are – and this holds for other early works by Rainer – repetition, variation, and the underlining of her actors’ real bodily presence. Her eschewal of a specific narrative line with intro, climax, and finale and her avoidance of eye contact with the audience are also typical of her works. Moreover, in The Mind Is a Muscle Yvonne Rainer’s interest in combining dance with other forms of expression such as film and installation also emerged – during the perform- ance she ran the film Volleyball which she had made a year earlier and a slide show, and used a cassette recorder, foam plastic sheets, and mattresses as stage design and as props. In line with her critique of the adulatory enshrinement of choreographer and individual dancers, and the concomitant star cult, she dissolved her own company in 1970 and founded a democratically operating dance group Grand Union with likeminded friends.

In the early 1970s, Yvonne Rainer turned her back on the stage to make movies with her specific type of directorial work uniting fiction and reality, the personal and the political. Yet this did not entail turning her back on the sub- jects and strategies she had dealt with and implemented there. Her rejection of linear narrative and identification with actors, no less than her intellectual abstracting of emotion are also found in her films. Quite apart from the historical documentary value of the seven movies Rainer made from 1972 to 1996, their treatment of political themes (such as racism), autobiographical aspects, and feminist issues makes them outstanding works of 20th century movie history.

Since 2000, Yvonne Rainer has been choreographing again, drawing on elements of pop culture, sport, general dance history, and her own works.

While Yvonne Rainer has twice taken part in documenta (1977, 2007), had film retrospectives at the New York Museum of Modern Art and at the Tate Gallery in London, and her influence on the visual artists – above all on a younger generation – can hardly be rated highly enough, there has been no big survey exhibition in Europe to date that attempted to establish the significance of her complex oeuvre for art history and to do it justice in terms of its current relevance.

The exhibition curated by Yilmaz Dziewior and Barbara Engelbach in Bregenz and Cologne will change this. Not only the complexity of Rainer’s oeuvre is a challenge, but also the fact that her dance pieces were conceived as live performances and hence raise questions in a museum context as to their adequate presentation. The museum’s response here will take the form, on the one hand, of live performances of Trio A in the museum itself, but above all in a collaboration with the Vorarlberger Landestheater, where Yvonne Rainer and her company will be performing two of their current works on February 1, 2012. The show will also present photographs and film documentations of stage works, notebooks, dance scores, scripts, and movie and exhibition posters. Kuehn Malvezzi will be conceiving the exhibition design. In addition to the rare chance to see works by Yvonne Rainer performed live, all of the artist’s films are to be screened at the Kunsthaus Bregenz. All in all this many-sided project will offer detailed and far-ranging insight into the legendary work of Yvonne Rainer.

Before her exhibition at the Kunsthaus Bregenz opens Yvonne Rainer will be presenting two of her most recent performances at the Vorarlberger Landestheater, Bregenz. For Spiraling Down the American choreographer drew inspiration from widely varying media and spheres of life – from the movements of footballers and old movies to Facebook and anti-militarist photos. The result is a quartet tinged with melancholy and marked by unpredictable developments.
The choreography of Assisted Living: Good Sports 2 was suggested by a series of photographs in the sports section of the “New York Times”. Taking their lead from these photo- graphs seven dancers developed a unique choreographic language that alternates between abstraction and sport-related sequences of movement.

The performances are organized in cooperation with Performa, New York, and the Vorarlberger Landestheater, Bregenz.

The journal springerin – Hefte für Gegenwartskunst published in Vienna addresses a heterogeneous audience whose interests range from contemporary culture to general pop-cultural topics. Hence the journal and kub Arena share much common ground both in respect of subject matter and in terms of their target audiences. While the production, presentation, and distribution of the journal’s contents take place in the typical form of text and image, in an exhibition context it is the exhibits that are crucial. However, because theoretical, social, and interdisciplinary issues are so central to the kub program, styles of presentation are often close to the discursive form of a journal. The cooperation between springerin and kub Arena will explore what specific spaces each creates and how these are used. Can a journal be translated into a physical space for instance – in particular the kub Arena – and can the topics and methods dealt with and employed in an exhibition be translated into journal format without merely illustrating or simplifying the subjects?

The concept of value in its various senses lies at the heart of this joint project. “Value change,” “decline in values,” and the like, normally in relation to the corruption or erosion of traditional values, are much touted ideas nowadays. At the same time, material goods and increasingly all-embracing individualistic values would seem to be becoming more important than ever. How is this development reflected in the field of art? What new positions, erosions, and breaks with the past have occurred in the last ten to fifteen years? What visible factors pertaining to value and validity have established themselves in conjunction with what more or less valid articulable factors? What ideas of value, transient or enduring, are inscribed in such different art- related formats as exhibitions, works, discourse, or media like journals and magazines? Further lines of inquiry will explore the extent to which “criticality” – whether in the medium of the exhibition or the journal – represents abiding values and what temporal and|or contextual constraints they are subject to.

Changes in the ideas of freedom and creativity – which once shifted between individualism and the collective, but which today tend almost exclusively toward the first of these two poles – are another focal point of the project. Finally, the value (or “un-value”) of the lack of alternatives with which our battered socioeconomic system is currently heading toward its expiry date will also be tackled. The question as to what “independent” values journal and exhibition can establish in respect of the above-mentioned issues will underlie these investigations.

As part of the springerin and kub Arena cooperation a project-oriented presentation is to be developed on the ground floor of the Kunsthaus Bregenz accompanying the production of the journal’s spring 2012 number. Central here are questions as to the durability and “shelf- life” of art and cultural appreciation and the different productive and distributive modes of exhibitions and magazines. Apart from the issue of the journal appearing along with the cooperation, a complete display of all springerin publications will be on show in the kub Arena. A jointly planned program of events will accompany the project.

Enduring Value? – Magazine Release | Wednesday, 04 April, starting 4 p.m.
with members of the editorial board and guests.
A detailed program with the exact times of events will be appearing in due course.