The Cartographer's Conundrum. Biggers' goal is to both study and expand the emerging genre of Afro-futurism, which engages science-fiction, cosmology and technology to create a new folklore of the African Diaspora while simultaneously illuminating the underrepresented career of master painter and muralist John Biggers. 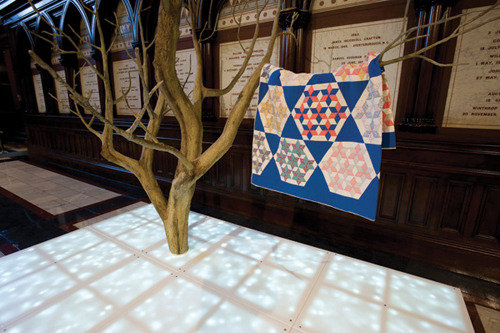 The Cartographer's Conundrum is a major multi-disciplinary installation By New York-based artist Sanford Biggers. This new work is inspired by the Houston, Texas based artist, scholar and Afro-futurist John Biggers (1924-2001). A cousin of his subject, Sanford Biggers' goal is to both study and expand the emerging genre of Afro-futurism, which engages science-fiction, cosmology and technology to create a new folklore of the African Diaspora while simultaneously illuminating the underrepresented career of master painter and muralist John Biggers.

Afrofuturism was a phrase coined in 1995 by cultural critic Mark Dery in is essay Black to the Future, where he links the African American use of science and technology to an examination of space, time, race and culture. In this text Dery defines afrofuturism as: "Speculative fiction that treats African-American themes and addresses African-American concerns in the context of 20th century technocluture - and, more generally, African American signification that appropriates images of technology and a prosthetically enhanced future…" The movement began in earnest in the mid-1950s with musician Sun-Ra, whose music blended science-fiction, mysticism, African culture (with a particular focus on Egypt) and jazz fusion, all of which coalesced in his 1972 film Space in the Place. In 1975 George Clinton formed his bands Parliament and Funkadellic, which took afrofurturism to new often absurdist heights. Today the movement is still strong, encompassing contemporary musicians like Saul Williams, Janelle Monae, OutKast and DJ Spooky along with writers like Paul Beatty, films like the Matrix, Blade and Chronicles of Riddick and visual artists like Sanford Biggers.

This use of afrofuturist imagery and ideologies links both Sanford and John Biggers work. John Biggers began as a mural painter in the genre of social realism - portraying African American life. His work took a shift when in 1957 he won a UNESCO fellowship, becoming of the first African American artists to travel to Africa. His trip took him to West Africa, and later he traveled to Nigeria and other African countries. This experience had a profound impact on his work, which afterwards took these African themes, merging them with his images of African American life to create allegories about life, spirituality, hope and survival. John Biggers work also touched upon Afrofuturism in his use of sacred and fractal geometries and mystical imagery.

Sanford Biggers had always been inspired by his cousin''s work and journey. So, after being awarded a Creative Capital grant in 2008 Sanford Biggers used the opportunity to concieve of a new project that would place him and his cousin side by side. Sanford began by traveling through western Africa along the same route John Biggers followed in the 1950s, meeting with colleagues and family members along the way.

A native of Los Angeles, California, and current New York resident, Sanford Biggers uses the study of ethnological objects, popular icons, and the Dadaist tradition to explore cultural and creative syncretism, art history, and politics. An accomplished musician, Biggers often incorporates performative elements into his sculptures and installations, resulting in multilayered works that act as anecdotal vignettes, at once full of wit and clear formal intent.

Major support provided by The Andy Warhol Foundation for the Visual Arts and the National Endowment for the Arts, with additional support from the Toby D. Lewis Philanthropic Fund of the Jewish Community Federation of Cleveland and the Massachusetts Cultural Council.