'Video Vintage' presents thirty videos realized in the years from 1963 to 1980, each marking an experimental breakthrough for the medium. 'Albers in America' brings together eighty oil-on-card studies rarely shown in public. These are for the most part preparatory works for the famous Homage to the Square series begun in 1950, a triumphant demonstration of the power of colour alone, of which the Centre Pompidou holds six examples. The exhibition opens with the preparatory studies, notably the Variant series of the late 1940s, and continues with a fine selection of works from the Homage to the Square series in different colour combinations. 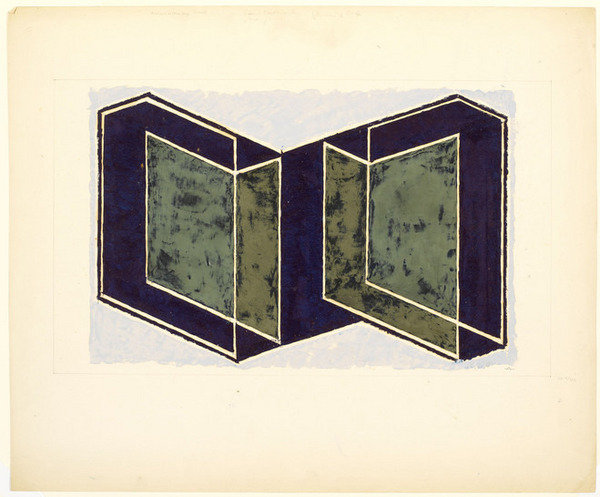 Presented in the Galerie d’Art Graphique of the Centre Pompidou from 8 February to 30 April 2012, the Josef Albers en Amérique / Josef Albers in America exhibition brings together, for the very first time in Europe, over 80 oil-on-paper studies on loan from the Anni & Josef Albers Foundation in the United States and the Museum Quadrat in Josef Albers hometown of Bottrop in Germany. This exceptional exhibition travels to venues in Germany, Denmark, Switzerland, Portugal and the USA. In Paris, the exhibition also features two paintings by the artist from the Centre Pompidou’s own collection.

For the most part, the works exhibited are preparatory sketches for the celebrated Homage to the Square series which Albers pursued from 1950 until his death in 1976. Some are experimental sketches in colour, others represent almost final versions of the paintings to come. They are a triumphant demonstration, through bold juxtapositions, of the sheer power of colour. Inscribed directly on the sketches, comments by the artist point to his own research into colours of which he came to be seen as one the great innovaters. Among the many contemporary artists who declared themselves influenced by Albers are Sol Lewitt, Dan Flavin, Donald Judd and Richard Serra. Albers, who disliked the notion of colour theories and formulae fervently believed, instead, in empirical colour experimentation. The exhibition sheds a fascinating light on this conceptual dimension of Albers’ work. Jointly organised by the Josef Albers Museum Quadrat, Bottrop and the Staatliche Graphische Sammlung, Munich, the exhibition has received generous assistance from the Anni & Josef Albers Foundation of Bethany, Connecticut.

Josef Albers (1888-1976) trained as an art teacher at the Königliche Kunstschule in Berlin between 1913 and 1915, then studied part-time at the Kunstgewerbeschule, Essen. In 1920 he became a student at the Weimar Bauhaus, before being appointed a teacher there in 1923. After the closure of the Bauhaus in 1933, he emigrated to the United States with his wife Anni, becoming a US citizen in1939. Between 1933 and 1949, he was head of art at Black Mountain College, newly established in North Carolina. From 1950 to 1959, he was head of the Art Department at Yale. In 1950, Josef Albers embarked on his renowned Homage to the Square series, which he continued to develop until his death in 1976. There he used the arrangement of four squares one within another to explore the interactions of ever-changing combinations of colours. This very form allowed the colours to find full expression, making the series a landmark in the exploration of the function of colour in painting. The exhibition “Josef Albers en Amérique” / “Josef Albers in America” brings together a selection of studies for this series, preparatory works that testify to the experimental character of the undertaking. The colour relations essayed, the notes, and the serial nature of the work unite to offer a vivid embodiment of the theory of colour that Albers would publish in his Interaction of Colors