A Return to Painting, 1960-2011. Approximately 60 paintings and three models of installations/monuments that have so far not been realized, the presentation will comprise early works. Since the year 2003 or thereabouts, Kabakov has largely turned his back on the installation as an art form and is now forging ahead with a very personal brand of painting in which he undertakes a revision of what he has lived through and accomplished, of images of the past, of the world of Soviet Socialism. 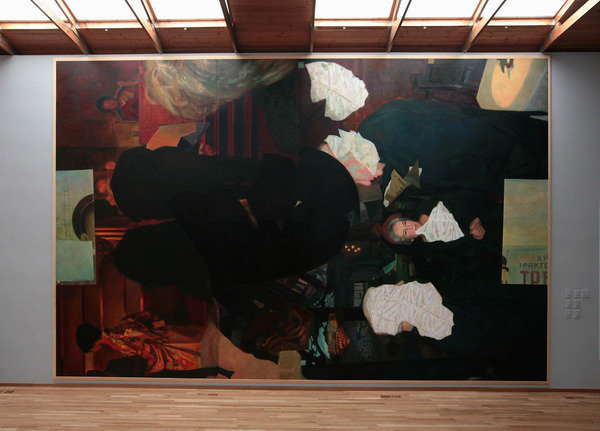 Painting has of course been a central enduring feature of Ilya Kabakov’s works in ever diverse manifestations, in various role playing games, since the early 1960s. Painting accompanied Ilya Kabakov as an alternative during the period when he earned his living in the Soviet Union as an illustrator of children’s books; as an 'opus magnus' it regularly interrupted the series of drawings and portfolios in which the artist developed his ideas and narratives. It placed accents in his oeuvre where it took up for example the pictorial inventions of individual drawings. Kabakov examined the length and breadth of painting in role playing games; by inventing various artist personalities known as personages he put wide-ranging, free artistic works to the test in various ways, bringing them into the world theatrically with imaginary oeuvres and biographies. It would appear as if Ilya Kabakov could always conceal himself as a painter in these invented personalities, not revealing his own identity in the process, but hiding instead behind fictions and role playing games. Even in his countless installations of the past several decades, which he realized together with his wife Emilia, painting has played a central role time and again.

“But when I started working with installations – in the West I was much more concerned with installations than with pictures – the important question arose: ‘What remains after the exhibition is over?’ A picture keeps existing even without an exhibition, but an installation is very ephemeral and is almost never preserved after an exhibition. All that remains are the memories of it, but nothing is left for ‘history’. But I’m more interested in the perspective of future generations than in that of my contemporaries. What remains of art for a long time afterward, goes down in history?” (Ilya Kabakov, in “A Dialogue with Ilya Kabakov by Matthias Haldemann”, in: Ilya Kabakov, Artist Books/Künstlerbücher, 1958-2009, Catalogue raisonné, Bielefeld 2010)

Since the year 2003 or thereabouts, Ilya Kabakov has largely turned his back on the installation as an art form and is now forging ahead with a very personal brand of painting in which he undertakes a revision of what he has lived through and accomplished, of images of the past, of the world of Soviet Socialism.
This marked the beginning of a process of reversal, of self-examination, of reflection; and even though memory, the dealing with what one has put behind one’s self, had already been a central theme of his artistic endeavours over the course of the years, it is now rather something that is expressed personally. Only the painting artist and the viewer before the canvas remain; the oeuvre leaves the installation space where the viewer who is wandering about can become a part of a narrative and a spatial continuum.

“Flying”
Multi-piece sequences have resulted, including “Flying”, works in which the vanishing of these real worlds now finds its reflection. The flying, floating, fleeing images in the white picture spaces of the series “Flying” not only denote the disappearance of these worlds but also allude to the diametrically opposed traditions of 20th century painting: the representational at the one extreme, the abstract and the constructive at the other.

It is additionally possible to follow developments and role playing games over the various stations of the 20-part cycle: there are the heroes of that time, the busy administrators, the vacationers, those who experience nature, the athletes and women, the children and happy old people. They are all in the process of taking off, all disappearing from the picture plane. Their images have long since entered other images, flee there and lose themselves in a space that is immaterial, perhaps one of fading memory.

In his personal commentaries, Kabakov often places his work in direct contexts, references them to modernism of the 1920s and 1930s. However, these pictorial inventions have parallels and occasionally evocative predecessors that reach back even further into the history of art. It is particularly evident in Kabakov’s works from recent years that he is an historically intense locator, one whose frames of reference are not solely Soviet modernism of the 1920s and 1930s or the negative backdrop of life of the Soviet Union during the 1950s and 1960s; Kabakov takes recourse to a humanist education that turns the museums into textbook examples of venues for the survival of art.

“Paintings with Black Spot”
Of a particularly personal character, and of unusual directness, are several groups of works produced by Kabakov more recently. In “Paintings with Black Spot”, the artist creates a montaged, multi-focused picture space in which personal experiences of more recent times – such as his stay in Japan on the occasion of the presentation of the Praemium Imperiale award – find expression in imagined, large-scale scenes.
But what is conspicuous in the overall composition of these large-format paintings is the theme of the active viewer who is integrated into this complex painterly reality that completely encompasses him in his visual level. Kabakov stages an enormous painterly event, one that references the conversion of collage into painting, one that dissolves the distanced experience of sight and takes us into an immaterial space formed from the addition and interconnection of numerous individual pictorial elements. The dark colouration of this group of paintings contrasts strongly with the open presentation of family photographs from the group entitled “They are looking”.

“They are looking”
Here Kabakov imagines – with only a few family photographs to go on – a confrontation of painter and viewer alike with the real and fictitious figures of the artist’s personal past. The aunts and uncles, the mother and her child Ilya Kabakov look at us, the viewers, and evoke from the past a lost life spent in a Jewish family in the Soviet Union of the Stalin era.

In his own commentary on his series of pictures Ilya Kabakov speaks about the losses that each of these persons represents for him. The pictures of his aunts and uncles, the family pictures, the portrait of little Ilya on his mother’s knees are concrete points of contact that have been made possible with the assistance of a few preserved family photographs and the artist’s memory. This coincides with the visual trigger of the series, the quality of painting from the distant past, in this case the group portrait of The Syndics of the Drapers’ Guild painted by Rembrandt in 1663. The intensity of the glances of the persons portrayed by Rembrandt, all of whom enter into a direct contact with the viewer from within the picture field, forms the trigger for the artist to consider his own life. The place of the syndics is taken by members of his family; one glances at known and related persons who demand contact and a dialogue that can only be accomplished by the artist through the evocation of their likenesses.

The complex and painful process of unfinished communication, a look into the hereafter, the attempt to enter into a conversation by means of glances in order to bring matters to a conclusion: all of this stands behind the great affirmation in these pictures. The knowledge that comes with age that tells us that everybody is responsible to his own history might be one of the reasons behind the radical step in these paintings towards such an unaccustomed subjectivity.

The exhibition will show approximately 60 paintings and three models of installations/monuments that have so far not been realized. The presentation will comprise both early works, including works frome the series “On the Edge”, and works from the following series and groups: “Three Paintings with Dark Spot”, “Flying”, “Paintings with Door”, “Collages of Space” and “They Are Looking”. Ilya Kabakov’s painting oeuvre has never before been shown in this scope and diversity.

Accompanying the exhibition will be a 278 page catalogue with illustrations of all works together with texts by Ilya Kabakov, Karin Hellandsjø and Ulrich Krempel, published by Kerber (hard cover, 29 Euros).