Painting of the Eighties. The exhibition documents the fight over traditional formal and iconographic patterns, their reassessment, the partly aggressive anarchistic pleasure in breaching taboos as well as narrative unpredictability: Martin Kippenberger, Peter Angermann, Elvira Bach, Albert Oehlen and many more. 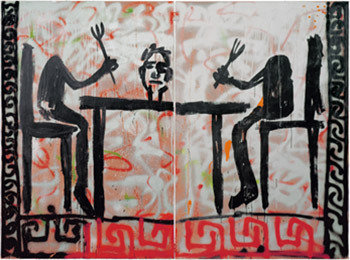 For many young artists, German painting around 1980 was strongly influenced by the Punk movement emanating especially from London and New York. Many painters felt a direct tie to the music scene, organizing concerts or playing in short-lived bands. Punk rock was typified by provocation, destructive pleasure, and a questioning of established social values. The punk scene furthermore soon developed into a trendsetter in terms of fashion, design and accessories. The punk "style" left its mark on urban street art and photography, on the outer habitus as well as the shaping of the younger generation's political and social beliefs. This cultural revolt's "style" also had a direct affect on the visual arts, particularly painting. It manifested itself in an art scene that in the late 1970s was attempting to distance itself from a concept and object art that was regarded as austere and theoretically vapid.

The exhibition documents the fight over traditional formal and iconographic patterns, their reassessment, the partly aggressive anarchistic pleasure in breaching taboos as well as narrative unpredictability.

Works will be presented from the "Sammlung Tiefe Blicke" that has been on permanent loan to the Hessisches Landesmuseum Darmstadt since 1984. Large format paintings by the ironists Peter Angermann, Blalla W. Hallmann, Milan Kunc, Jiri Georg Dokoupil, and Walter Dahn are contrasted with the "wild," neoexpressionist explosions of color by such artists as Helmut Middendorf, Elvira Bach, Albert Oehlen, Volker Tannert, and Bernd Zimmer. At the core of the exhibition are 19 paintings by Martin Kippenberger. The genre of painting is supplemented by sculptures by Felix Droese, Meuser, Harald Klingelhöller and the anarchistic "Endart" group from Berlin.

The accompanying program for this exhibition encompasses a wide-ranging series of educational events such as guided tours, workshops and lectures. Highpoints are a reading by the writer and musician Thomas Meinecke ("FSK") on March 15, 2012 presented in cooperation with the Centralstation Darmstadt and the Literaturhaus Darmstadt as well as a concert with the band "Fehlfarben" on April 27, 2012 in the Centralstation.

A catalog is published on the occasion of the exhibition.