Drawings. The show features two series of drawings titled Incisions and Open-Limit in which Parent develops plans for his Ville oblique, in effect an entirely 'sloped' city. 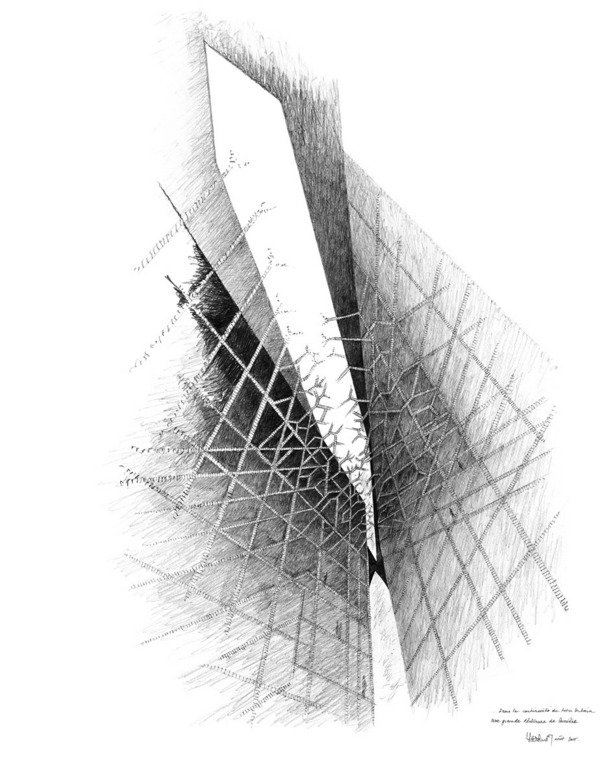 Esther Schipper is pleased to present the first exhibition of drawings by French architect Claude Parent in Germany.

By the early-1960s, Claude Parent had already had a successful architectural career. With the completion in 1952 of 'Maison G’' (together with Ionel Schein), he had introduced American bungalow-style modernism in France and with the design of various supermarkets in the greater Paris area (Nanterre, 1958; La Celle Saint Cloud, 1959; Athis-Mons, 1961) firmly been established as a name in French architecture.

He worked closely with Yves Klein on the design of a rocket and designed the home of the fellow architect, sculptor and painter Andrèeacute; Bloc.

Parent gained further recognition in the 1960s, when together with philosopher and urbanist Paul Virilio he developed the ‘oblique function’ theory that was inspired by a joint visit to WWII bunkers situated on the Atlantic Wall. The theory focuses on the inclined plane as a new relationship between architecture and the body. Forming the ‘Architecture Principe’ group, investigating a new kind of interplay between architecture and urbanism, they rejected the traditional axes of horizontal / vertical and used oblique planes in an architecture of disequilibrium; to turn living spaces into dynamic areas of bodies in movement.

Parent's first and his most spectacular buildings harnessing this theory is the church of Sainte-Bernadette du Banlay at Nevers completed in 1966. In 1970, together with Virilio, he published Vivre à l'Oblique, the manifesto of the 'Oblique Architecture' movement. In the same year, he installed a sloped floor in the French pavilion at the 35th Venice Biennale. His architectural style has not been entirely uncontroversial as in 1986 he participated in the design of Cattenom, a nuclear power plant situated on the river Moselle in Lorraine, France. Esther Schipper shows two series of drawings titled Incisions and Open-Limit in which Parent develops plans for his Ville oblique, in effect an entirely 'sloped' city.

Claude Parent (*1923, Neuilly-sur-Seine, France) lives and works in Paris. He has influenced some of the most prolific architects today, including Rem Koolhaas and Jean Nouvel. In 1979, he was awarded the Grand prix national de l'architecture and in 2010 was made Commandeur de la Légion d'honneur. He is a member of l’Academie d'architecture and l’Academie des beaux-arts. In 2010, the Cité de l’Architecture et du Patrimoine, Paris, honored Parent with a major retrospective titled Claude Parent: Graphic and Built Works. An exhibition in association with Galerie Natalie Seroussi (Paris) and Daniel Wust.