The Military Series. Aleksandr Sokurov's oeuvre is varied, including features, documentaries, videos, and programmes for TV and radio. All of these share a thread: the search for human nature, to represent the experience of a whole generation, age or, even, a whole civilisation. The project to which Jacinto Esteva devoted more time was 'Lejos de los arboles', a film essay, the production of which lasted from 1963 to 1970. On view a broad selection of photographs by Oriol Maspons, who worked with Esteva. 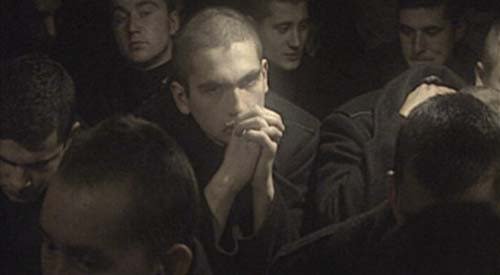 The work of Aleksandr Sokurov (1951, Siberia) could be defined as an exploration of the crossroads between two different filmic traditions: documentary and fiction, with the term ‘fiction' understood as the pursuit of an artistic transformation of reality. Sokurov's methodology could be characterised as a new approximation of filmic ‘traditionalism' in which the nature of personal experience takes a central role within that approach.

Sokurov's oeuvre is varied, including features, documentaries, videos, and programmes for TV and radio. All of these share a thread: the search for human nature, its hidden meanings and the definition of the ontological characteristics of every protagonist in order to represent the experience of a whole generation, age or, even, a whole civilisation. A body of work in which representations of landscapes play an important part and where reality is transformed into an abstract composition and an artistic metaphor. An idea that can be extrapolated to the documentary material that Sokurov uses not as an illustration or interpretation of a concept or an idea, but instead as the revelation of an emotional state. A body of work in which different levels of interpretation co-exist and which could be defined as one of the most complex and interesting in contemporary film making.

The exhibition at the MACBA presents for the first time, the simultaneous projection of all the pieces in the museum's collection: Spiritual voices (1995), Confession (1998) and The soldier's dream (1995). These films, conceived as a single travel diary, deal with one of the artist's recurring themes: military life on the frontline as a metaphor for the human condition. A representation of experiences marked by war in which temporal limits cease to exist. Shot on the border between Tajikistan and Afghanistan, Sokurov shares private moments with the soldiers taking us closer to a reality marked by the war and its effects; a series of films in which music plays a central role, accompanying us through cinematic poems, which don't only need to be seen, but also listened to.

This exhibition is presented as part of a collaborative project with the CCCB within the context of the exhibition Global screen and will be complemented with a season dedicated to the feature films of Aleksandr Sokurov at the Filmoteca de Catalunya. It is also important to point out that this constitutes an opportunity to reflect on the role of cinema within a museum context helping us to explore the limits, both conceptually and in terms of artistic representation: a line of study that began in shows like The Otolith Group. Ways of thinking or 1395 Days without Red by Sejla Kameric and Anri Sala, still in exhibition, in which the relationship between the films and documentaries, the possibilities of sound and the limits between cinema and artistic production take a central role.

Exhibition conceived by MACBA and MoMA PS1 and organised by MACBA.
In collaboration with the Centre de Cultura Contemporània de Barcelona (CCCB) and the Filmoteca de Catalunya.

Lejos de los árboles (Far from the Trees) could have been born and publicized as a denunciation of the atavisms and inertias that still survived in the developmental Spain of the 1960s, but, actually, it revisits one of the central themes of the 20th-century avant-gardes: alterity, the other worlds that are within this one, the Other Side that is here, the doors or trapdoors through which we have access to other hidden or invisible human universes, inhabited by the most opaque dimensions of the human condition. On the other side of the limit are those that we have called primitives, barbarians or savages, but also those that, closer to us, on the outside, embody what is archaic, elemental and, at the same time, boundless. But there are other boundaries, presently the inner ones, from which what is inconceivable is expressed as an immanent part of the very urban life. Trained as an urban planner and architect, with Lejos de los árboles (Far from the Trees) Esteva wanted to help to refute the false divorce between the rural world and the urban one, as well as to reflect differently on the city, showing how the very same forces of diversity and incalculability tossed and turned in it.

Jacinto Esteva (1936-1985) was one of the most distinguished members of the Escuela de Cine de Barcelona (Barcelona Film School). As a filmmaker, producer and scriptwriter, his work spanned the 1960s. The project to which he devoted more time and dedication was no doubt Lejos de los árboles (Far from the Trees), a film essay, the production of which lasted from 1963 to 1970. After a series of successive editings, it was shown for the first time in 1972. The version we present on this occasion has been edited again by Pere Portabella, who was the first producer of the film.
The ethnographic character of this project brings it close to the Neorealism practiced at that time by photographers such as Oriol Maspons, who was in charge of still photography. On the first floor it is possible to see a broad selection of photographs from the Maspons-Ubiña Studio commissioned by Filmscontacto, the production company founded by Jacinto Esteva.
The collection sums up the different campaigns that were needed to gather the rituals of a Spain tied to a rural identity. Another group of photographs show Jacinto Esteva in Africa, once he had become a hunting guide and had given up his relationship with cinema.