Ay-O: Over the Rainbow Once More, a retrospective of his career from his early works to the present day. Together with Masuo Ikeda and others, he was active in the Demokrato Artists Association during the 50es, attracting notice for his brightly-colored oil paintings. Atsuko Tanaka: The Art of Connecting, this exhibition contains approximately 100 works, her representative oevre standing out for their originality, even among the Gutai. The highlight of the parallel program will be various new works by contemporary artists. For the Bloomberg Pavilion Project the Techno-Shugei Club combines electronic devices and handicrafts. 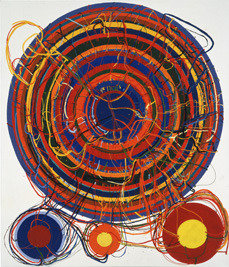 Ay-O
Over the Rainbow Once More

Discover the vibrant world of Ay-O through this retrospective of his work, covering his entire career, from his early works to the present day.

Born in Ibaraki Prefecture in 1931, Ay-O, together with Masuo Ikeda and others, was active in the Demokrato Artists Association during the fifties, attracting notice for his brightly-colored oil paintings. In 1958 he moved to New York, where he used tangible objects to try to create dialogues with the world that can perceived through the senses, resulting in his „finger boxes‟, in which a finger is inserted into a hole in the side of a box to feel the material hidden inside, installation works that incorporate their surrounding environment, etc., going beyond the confines of the painting to produce works that appeal to the five senses. During the sixties, when everyday things or actions were translated into art, Ay-O received attention for his pioneering installations that he called „environments‟. As a member of the Fluxus movement, which went beyond the narrow divisions of genre to include musicians, poets and artists, its activities extending to performances and printed works to establish the foundations of today‟s diversity of art, he worked with such people as Yoko Ono and Nam June Paik. Finally, he rebelled against the concept of creating works consisting of lines, instead filling his motifs with the colors of the spectrum, from red to purple, giving birth to his „rainbow‟ works, becoming famous throughout the world as the „rainbow artist‟ subsequent to his exhibition at the 1966 Venice Biennale. Ay- O‟s struggle with the rainbow was expressed in a variety of genres including prints, paintings and installations, and still continues to the present day.

This is the largest-ever exhibition to be held of his work, presenting numerous paintings from the rainbow series, an interactive installation that people are invited to appreciate through touch, a new work that is 30 meters in length and contains a rainbow consisting of 192 colors, a 300 meters long banner that was suspended from the Eiffel Tower in 1987 and recordings of his performance works. The gallery will overflow with Ay-O‟s optimistic world.

Atsuko Tanaka
The Art of Connecting

The Museum of Contemporary Art, Tokyo, is holding the ‘TANAKA Atsuko—Art of Connecting’ exhibition as a joint project with the Japan Foundation, the U.K.’s IKON Gallery and Spain’s Espai d’Art Contemporani de Castelló.

TANAKA Atusko (1932-2005) began to pursue abstract expressions on the advice of KANAYAMA Akira and starting with the collage work, ‘Calendar’, she expressed a unique sensitivity combining delicacy and power. Later, with KANAYAMA she participated in the avant-garde ‘Gutai Art Association’ that was formed under the leadership of YOSHIHARA Jiro. She received attention for her ‘Work (Bell)’ (1955) in which twenty electric bells were rigged to ring consecutively, ‘Electric Dress’ (1957), which consisted of approximately one hundred fluorescent tubes and approximately eighty light bulbs, painted in nine colors of enamel paint and worn like a garment, etc., her installations and performance works standing out for their originality, even among the Gutai. Her work during this period utilized non-physical materials, such as sound, blinking lights or time, abstracting them in a way that highlighted their existence without adhering to traditional artistic expressions. She also ventured to express her experiments through painting, substituting the light bulbs and wires of her ‘Electric Dress’ with circles and lines, producing a huge number of variations on this theme over the course of her life. It appears that sometimes the path she took led to extremely radical developments and at others, simple repetitions, but in actual fact, all her works were connected and all were new experiments.

There is a growing movement to reevaluate Japanese postwar contemporary art, beginning with the Gutai, and TANAKA Atsuko gained particular recognition after being spotlighted in Documenta12 (2007) that was held after her death. The current exhibition will contain approximately one hundred works, including recreations of her representative works, ‘Work (Bell)’ and ‘Electric Dress’, that were reproduced under the artist’s guidance, allowing the viewer to retrace her footsteps as she continually sought to explore the innovative.

The ‘Connecting to Atsuko Tanaka’ program will consist of a talk show, the screening of a documentary on Atsuko Tanaka, entitled ‘Atsuko Tanaka Another GUTAI’, and various other attractions. The highlight of this program will be the presentation of various new works by contemporary artists: a large-scale balloon sculpture by Shiro Matsui named, ‘between here and there is better than either here or there’, performance and a video installation by Masayuki Kawai, who connects video equipment together to create music and images from the sounds it produces, and also a performance and a video work by Yui Uechi, who covers her entire body in luminous paint. ‘The possibilities that were pioneered by Atsuko Tanaka have yet to be exhausted. They continue to the present day.’ (Akio Seki)