Featuring thirty-four artists, artist groups and temporary collectives, born between the mid-1970s and mid-1980s, this group show talks about the urgencies of a generation who came of age after the independence and revolutionary movements of the 1960s and 1970s. Through both materials and form, works included in the exhibition explore impermanence and an engagement with the present and future. Many of the works are provisional, site-specific and performative, reflecting an attitude of possibility and resourcefulness. 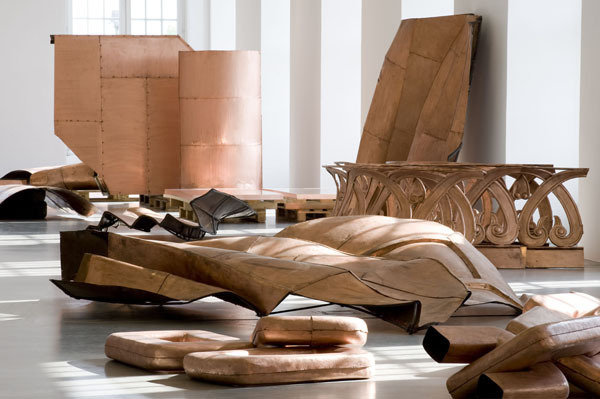 The 2012 New Museum Triennial will feature thirty-four artists, artist groups, and temporary collectives—totaling over fifty participants—born between the mid-1970s and mid-1980s, many of whom have never before exhibited in the US.

The exhibition title, “The Ungovernables,” takes its inspiration from the concept of “ungovernability” and its transformation from a pejorative term used to describe unruly “natives” to a strategy of civil disobedience and self-determination. “The Ungovernables” is meant to suggest both anarchic and organized resistance and a dark humor about the limitations and potentials of this generation.

“The Ungovernables” is an exhibition about the urgencies of a generation who came of age after the independence and revolutionary movements of the 1960s and 1970s. Through both materials and form, works included in “The Ungovernables” explore impermanence and an engagement with the present and future. Many of the works are provisional, site-specific, and performative reflecting an attitude of possibility and resourcefulness. In the sculpture of Adrián Villar Rojas, monumentality is juxtaposed with transience. Rendered in clay, the works depend on cracks on their surfaces—the inevitable failure of the object, of meaning, and the guaranteed transformation of all ideas and objects back to dust. But it is dust that is then repurposed, reimagined, and re-formed. When Danh Võ learned that the Statue of Liberty is simply a steel armature covered by a copper skin the thickness of two pennies, he researched the hammering process that gave her shape, then employed craftsmen to replicate the statue’s skin for his work WE THE PEOPLE. Julia Dault manipulates materials of modernity such as Formica and Plexiglas in temporal arrangements that can never be repeated. In her works, the artist’s labor is dependent on the conditions of a certain space, her strength to execute a work at a particular time, and the uncontrollable accidents her materials determine. House of Natural Fiber, a new media collective and alternative space, has recently combined microbiology and art to teach locals about safe ways to brew homemade fruit wine while amplifying and sampling the sounds of the distillation process to make electronic music. Jonathas de Andrade’s Ressaca Tropical (Tropical Hangover) is an installation of over one hundred photographs linked to pages of a romantic diary found in the trash. In isolation, the components of Ressaca are historical documents. However, pieced together, they comprise a larger fiction of what a city is and can be—how the past can remain alive, not through conservation, but instead through the invisible energy of living.

The New Museum has initiated a series of residencies and public programs to support the production of new works for the Triennial to foster artistic investigation, experimentation, and exchange. Residencies began in February 2011, with Public Movement and Adrián Villar Rojas focusing on research for Triennial projects. In June and July, the New Museum embarked on a concentrated period of activities with Wu Tsang as well as Shaina Anand and Ashok Sukumaran of CAMP. On November 4 and 6, Public Movement presented Positions, a choreographed protest in which political and philosophical positions manifest into physical positions. Wu Tsang continued to develop his work Full Body Quotation with a performance on November 19, which will be the foundation of his installation in “The Ungovernables” exhibition.

Artists and Collectives in “The Ungovernables”

Publications
Building on the Museum as Hub model, “The Ungovernables” incorporated lengthy consultation with a network of curators, organizations, and artists from around the world, including Museum as Hub partners. Their contributions have inspired the Art Spaces Directory, a resource guide to over 400 independent art spaces around the world, co-published by ArtAsiaPacific magazine and featuring essays by Víctor Albarracín, Reem Fadda and Christine Tohme, Stefan Kalmár, Naiza H. Khan, Catalina Lozano, Elaine W. Ng, and tranzit.org. “The Ungovernables” will also be accompanied by an exhibition catalogue designed by Santiago Piedrafita, Head of Graphic Design, North Carolina State University, and published by Rizzoli. The catalogue will include full color, four-page spreads on each of the thirty-four artists and groups; as well as essays and fiction by several participating artists, writer/curator Miguel A. López, curator Gabi Ngcobo, and Triennial curator, Eungie Joo.

About the New Museum Triennial
The Generational Triennial is a signature initiative of the New Museum. It is the only recurring international exhibition in New York City devoted to emerging artists from around the world, providing an important platform for a new generation of artists who are shaping the current discourse of contemporary art and the future of culture. The first edition in 2009, “The Generational: Younger Than Jesus,” featured fifty artists, from twenty-five countries, born after 1976.