Jones creates sculptures composed of fragmented images from magazines and used books that are beautiful, frightening, and exquisitely detailed: a macabre headless horse, a 19th century stagecoach, a disheveled TV. The solo show by Bangsted is comprised of mostly large scale photographs aggregated from numerous exposures over a period of time up to several years. 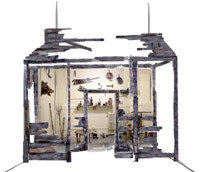 MARC STRAUS is pleased to announce an exhibition of new works by British sculptor Chris Jones.

Jones creates sculptures composed of fragmented images from magazines and used books that are beautiful, frightening, and exquisitely detailed: a macabre headless horse, a 19th century stagecoach, a disheveled TV.

For this, his first one-person gallery exhibit in the US, Jones worked in New York and was interested in the history of the Lower Eastside and this specific gallery space. Based on his impressions, he created a fantastical trading post replete with sundry items such as shovels, bear heads, and lamps echoing this area’s early 19th century and this building’s evolution from a tenement to a store for varied immigrant trades. It is also an homage to THE STORE that Claes Oldenburg opened nearby in 1961, selling his food-like handmade Papier Mache objects.

Jones’ work mimics the way in which we assimilate and process the world using our own personal histories and memories as a base to develop new connections. Jones has called on his own memories (through an art historic lens) and the viewers are in turn prompted to call upon their past to create their own personal stories as they relate to these wondrous pieces.

In the Sunday NY Times review of Jones’ one-person exhibit Ben Genocchio wrote , “No reproduction can convey the experience of encountering this work…it creates its own environment…inspiring a sense of enchantment and awe…And the feeling persists the longer you hang around.”

Chris Jones, b. 1975 earned an MA in Fine Art from Central Saint Martins College of Art and Design, London 2002. Jones was awarded an artist residency at the Hudson Valley Center for Contemporary Art (Peekskill, NY) in 2008 followed by a solo show at the museum. Jones’ solo gallery shows include Galerie Martin Van Zomeren in Amsterdam (2006) and the Glass Box Gallery, Manchester (2001). Jones has participated in numerous group shows throughout Europe, North America, and Asia, notably at Hamish Morrison, Berlin (2010) The Armory Show, New York (2009), and C-Space Beijing (2008).

MARC STRAUS is pleased to announce an exhibition of new works by Danish photographer Thomas Bangsted.

This will be the artist's first solo show in the United States. This exhibition is comprised of mostly large scale photographs aggregated from numerous exposures over a period of time up to several years. A bird perched on a pole, a workman laying on the Church floor – were there but once.

The nearest association and influence is likely Jeff Wall but Wall oftentimes sets the scene, builds the room, digs a gravesite. For Bangsted in these works nothing is altered. Every place undergoes its own natural change over time. We tend to miss that unless perhaps we come back after a long interval. Here he takes snippets from many moments and thus extends the conventional limits of photography. It is as if these were paintings.

Bangsted’s images have a sense of the uncanny; something isn’t quite right. Whether it is the precarious tilt of a ship’s masthead or a horse’s frozen jump, the viewer is forced to question what is seen and by extension what they ever see. We are presented with such a rich visual and beautiful palette and always we seem to enter in the midst of a profoundly interesting narrative and we are left to fill in the before and after.

For further information please contact James Cope at james@marcstraus.com or 212.510.7646.