Works from the 1950s onwards. This large retrospective is being held in two venues: Museo Thyssen-Bornemisza and Casa de las Alhajas, Fundacion Caja Madrid. "The Path of Poetry" shows the early years of his oeuvre, with a display of his work produced in Revolutionary Russia and during his time in Paris. "A Great Interplay of Colours" exhibits Chagall's work in France, where he also produced sculptures and ceramic pieces. 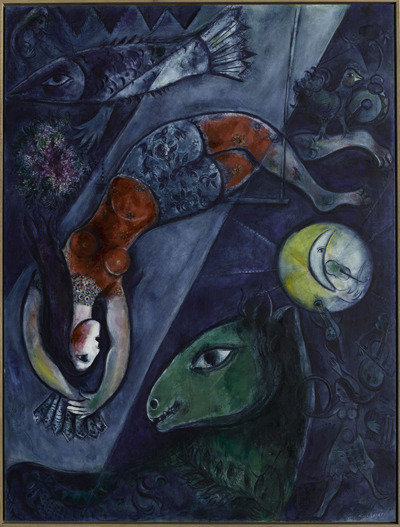 Organised by the Thyssen-Bornemisza Museum and Caja Madrid Foundation and curated by Jean-Louis Prat, President of the Comité Chagall, this exhibition will be the first major retrospective in Spain devoted to this Russian artist. Its principal aim is to highlight the prominent role played by Chagall within the history of art. The galleries of the Thyssen-Bornemisza Museum will display work from the artist’s early years and from his period in Paris, at that time capital of the avant-garde. In addition, there will be sections on Chagall’s experience in Revolutionary Russia and in France up to the time of his enforced exile to the United States in 1941. The exhibition space of Caja Madrid Foundation will focus on the artist’s American years and on his subsequent artistic evolution. Attention will be paid to his use of biblical subjects and his relationship with contemporary poets. Also on display will be works in other media such as sculptures, ceramics and stained-glass windows.

For more than eighty years Marc Chagall cultivated an art practice inspired by love, memories, Russian and Jewish traditions, and the historical or artistic events he witnessed and in which he often played a part. This retrospective traces his artistic development chronologically and examines the main themes that pervade the work of this artist, who is essential in envisioning the twentieth century.

The Path of Poetry
Russia: Sources and Traditions. Russia/France/United States, 1909-1947.
Vitebsk, Chagall’s native town, was home to a large Jewish community nourished by the traditions of the past, which underpinned their identity. It was a world full of rites and customs which nevertheless showed great resistance to innovation. Ever attentive to the expressions of life, Chagall painted the everyday existence of his town and his family, and also the soul of the Russian people.
Tradition and Innovation.
Chagall’s challenge to painting marked a genuine break with tradition. In the 1910s he settled in Paris; this rekindled his deep-seated nostalgia for Vitebsk and for his cultural roots, which was further heightened by the distance. Dreams populated his imagination, between the real and the unreal, between earth and heaven…

A Great Interplay of Colours
Return to France 1948-1985
Chagall left the United States for good after the Second World War. He went to rebuild his life in France, settling in Vence in the south of the country. He also painted Paris, the beauty of the city he so loved and its monuments: the Louvre, the Bastille, the Notre Dame and the Opera…
Pottery and Sculpture.
The possibility of inventing new forms and controlling the action of colour on clay enabled Chagall to establish close ties with an art rooted in popular tradition. In the fifties he began to explore ceramics, which led him shortly afterwards to create works in a different universe of everlasting materials, the world of sculpture.

Caja Madrid Foundation
Plaza de San Martín, 1, 28013 Madrid
Tuesdays through Sundays from 10am to 8pm. Closed on Mondays. Closed on 1 May 2012.
Admission is free