While the oeuvre of Gustav Klimt is now world-renowned, the man and artist behind it has remained almost completely hidden. The anniversary exhibition "Klimt: Up Close and Personal. Images-Letters-Insights" shows the artist in a different light, with select works being presented in juxtaposition with quotes from the artist himself. For this exhibition, the museum can draw upon its rich Klimt collection, which includes chief works such as the allegory "Death and Life", landscapes such as "Lake Attersee", "The Still Pond" or "The Large Poplar II" as well as more than one hundred drawings. 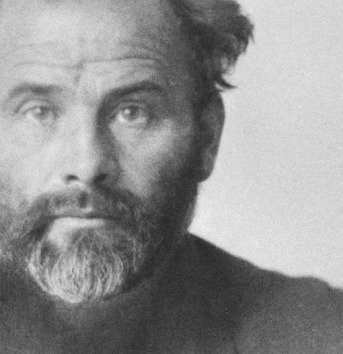 Home to an extraordinarily rich collection of eminent works by Gustav Klimt, the Leopold Museum is delighted to celebrate the artist’s 150th birthday with an exhibition dedicated to this important exponent of fin-de-siècle Vienna, who is among the most celebrated artists of the 20th century. One might assume that this presentation is merely one amongst the numerous special exhibitions held this year to commemorate the art- ist, many of which will shine the spotlight on different genres of his oeuvre, such as his landscapes or portraits, while others will focus on his drawings, on particular periods in the artist’s oeuvre or on special furnishing projects. However, the Leopold Museum has decided on a deliberately different approach to this, its first monographic exhibition dedicated to Gustav Klimt. Showing »Klimt: Up Close and Personal«, the presentation reveals the artist’s private and personal life – something that has never been done in this way before.

GUSTAV KLIMT: MAN AND ARTIST
While the oeuvre of Gustav Klimt is now world-renowned, the man and artist behind it has remained almost completely hidden. The anniversary exhibition »Klimt: Up Close and Personal. Images – Letters – Insights« shows Klimt in a different light, with select works being presented in juxtaposition with quotes from the artist himself.
For this exhibition, the museum can draw upon its rich Klimt collection, which includes chief works such as the allegory »Death and Life«, landscapes such as »Lake Attersee«, »The Still Pond« or »The Large Poplar II« as well as more than one hundred drawings. These renderings are complemented by other important works loaned to the museum and are presented side by side with statements made by the artist. By weaving togeth- er his life and his oeuvre, the exhibition reveals hitherto unknown aspects of Klimt’s personality. The artist caused many a controversy during his lifetime, which prompted him to increasingly retreat within himself. Klimt’s contemporary, the art historian Hans Tietze, wrote on this subject in 1919:
“The circumstances placed Klimt right at the center of the boisterous Viennese art scene, but he was actually a shy individual who abhorred making public appearances. [...] Even his friends were hardly ever allowed to glimpse behind the wall that Klimt had built around himself.”
(Hans Tietze, Gustav Klimts Persönlichkeit, 1919, p. 1)
It is hardly surprising, therefore, that the man and artist Gustav Klimt has become en- shrouded in countless clichés and myths, many of which this exhibition seeks to dispel.

THE POSTCARDS ADDRESSED TO EMILIE FLÖGE
Along with renderings from its own collec- tion, the Leopold Museum will present ap- proximately 400 postcards written by Klimt to Emilie Flöge throughout his life, which consti- tute the bulk of his correspondence known to us today. More than half of these belong to the Leopold Collection II, while the other half is housed by the Austrian National Library. Both parts are now being reunited for this exhibi- tion. Written in Klimt’s characteristic hand, these documents give an impression of great originality already in their outward appear- ance. The postcards form a timeline which will span throughout the entire exhibition.

»THE ARTIST SPEAKS«
This long thread of postcards weaving its way through the exhibition will be complemented by 20 select original quotes displayed on the walls. The sheer number of cards and quotes alone illustrates that Klimt’s reputation of being a lazy writer was undeserved, while they also reveal that, even today, he still has a lot of substantial things to say – especially about himself, his artistic understanding and his work as an artist. Klimt‘s quotes range from his confident statement “I can paint and draw, this much I know” to the artist’s last words on his deathbed when he asked for Emilie Flöge: »Get Midi to come«. The exhibition touches upon various topics, ranging from his artistic methods and his formative influences to reports from his annual summer holidays at Lake Attersee, from information about his collectors, benefactors and the sale prices of his works to Gustav Klimt’s hitherto largely unknown role as a caring father to his illegitimate children and his take on the young artists of his time

»GRECO IS SPLENDID«: KLIMT’S ARTISTIC IMPRESSIONS
Klimt was disappointed time and again with the sights and collections that were of- fered to him as big attractions. This makes his rare positive assessments, which he com- municated to Emilie Flöge in short notes, all the more precious. Often reduced to little more than a few words, these appraisals afford eye-opening insights into the master’s views on art. They were pointed, surprising reflections which were to sometimes mani- fest themselves in Klimt’s own works. In December 1903 Klimt reported from Ravenna: “Much of Ravenna is very poor – the mosaics are of incredible splendor.” During his stay in Madrid in the autumn of 1909 he wrote to Emilie from Toledo with much enthusi- asm: “Thought of you most intensely – You would have shared my delight. Greco is also splendid!” Especially interesting is a 1914 message from Brussels, where Klimt stayed at Stoclet Palace owing to a commission and where he experienced sub-Saharan African tribal art at the nearby Musée du Congo belge. While he was not much impressed with the museum itself, he raved: “What is really striking are the sculptures of these Congo- Negros! They are stunning and magnificent – it makes one ashamed to think that they in their way can do so much more than we can. I was completely blown away!“ It is rather surprising that the Jugendstil artist Klimt would respond to African and Oceanic tribal art with such unreserved enthusiasm.

SUMMER HOLIDAYS ON LAKE ATTERSEE
Almost all the landscapes Klimt created from the turn of the century onwards were inspired by motifs from his summer stays in the countryside. Very often the weather would thwart his plans, however, as he described in his let- ters to his mistress Mizzi Zimmermann, who had stayed behind in Vienna, writing that he would have to finish the paintings he started on site in his Vienna studio for lack of time. Showcased in this presentation are particularly strik- ing examples of Klimt‘s magnificent landscapes, including some notable loans from national and international collections. Numerous historical photographs are also presented in the exhibition, showing Klimt in a relaxed atmos- phere surrounded by his loved ones, either in his typical painter’s coat on the lakeshore or on his quests for suitable motifs for his paintings. The exhibition seeks to underscore the contrast between Vienna and Lake Attersee, between his working in the studio and en plain air, between Klimt as a public figure and in his private retreats.

THE STUDIOS OF GUSTAV KLIMT
Another emphasis of the exhibition is on the reconstruction of Klimt’s studios, which again serves to highlight the artist’s private, non-public persona. Between 1892 and 1911 Klimt worked in a secluded studio cottage situated in the backyard of a town house in the Josefstädter Straße. Around 1903 the Wiener Werkstätte fitted Klimt‘s workshop with expensive furniture designed by Josef Hoffmann, which the master also used to furnish his later studio in Hietzing, where he worked from 1912 until his death in 1918.
The studio was a refuge for the artist, a place where he could withdraw from the public and be himself. It also served as his private kingdom, where the female nude models captured by Klimt in thousands of drawings congregated, earning it the reputation of a myth-enshrouded “hortus conclusus” already during the artist’s own lifetime. These reconstructions of his studios provide an ideal setting for the Klimt drawings selected for this exhibition from the Leopold Museum’s rich collection. Since the presentation also includes many of the original objects that Klimt surrounded himself with in his stu- dios, such as a large number of original Japanese woodcuts, murals, theater masks and Japanese kimonos, Klimt is also speaking to us as a collector.
The paintings and drawings presented in the exhibition »Klimt: Up Close and Personal. Images – Letters – Insights« are complemented by a wealth of contemporary Klimt pho- tographs, which are unprecedented in their number, density and quality. These histori- cal photographs also explore the constant tension between the artist’s public persona and his private life. On the one hand, they show Klimt in a relaxed atmosphere among his friends in his typical painter’s coat on the lakeshore or on his quests for suitable motifs for his paintings. On the other hand, the exhibition presents photographs taken in the artist’s studio in Vienna by the most renowned Viennese photographers of the time, including Moriz Nähr, Josef Anton Trčka or the Benda-D’Ora Studio. These pictures reveal to what an extent Klimt used photography as a means of self-stylization.

EXHIBITION DESIGN: DIETMAR EBERLE
The design of this exhibition, which combines oil paintings with photographs and writ- ten documents with atmospheric images in an unprecedented way, has been placed in the hands of D.I. Dietmar Eberle, Professor of Architecture and Design at the Swiss Federal Institute of Technology Zurich. (www.baumschlager-eberle.com).