'To Adrian Rodriguez, with love' is an exhibition of new photographs by Willhide and is dedicated to the stranger who burglarized her home in spring of 2010. 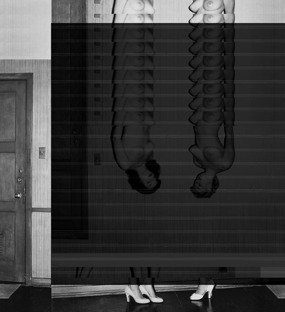 To Adrian Rodriguez, with love is dedicated to the stranger who burglarized the artist's home in spring of 2010. Among the objects stolen was Willhide's computer. Remarkably, police eventually recovered the computer, but upon its return Willhide learned the thief had erased its hard drive. When the artist attempted to recover the lost data the image files she retrieved were corrupted. Rather than attempt to recreate what was lost, Willhide chose instead to work in partnership with her machine. Treating the pixels more like paint, she enhanced some of the retrieved distortions and also created new images inspired by the corrupted files.

Willhide's images, which once read like straight photography, are now digitally sliced, mirrored and repeated in a playful demonstration of the medium's capacity for the inauthentic. In Name Our Children two women's high heels remain firmly planted on the ground while their topless upper halves have been turned upside down and separated from their bodies, two stacks of breasts endlessly repeated. Beefcake and Betsy is made up of fragmented strips and blocks of color—acid pinks, greens and blues—interrupted by the disjointed image of a muscleman lifting a woman over his head. In to Adrian Rodriguez, with love Willhide explores new possibilities while highlighting the fragile limits of an increasingly digital medium.

Melanie Willhide has an MFA in Photography from Yale University and has exhibited throughout the United States for nearly two decades. Her work has been reviewed and featured in the New York Times, Blind Spot, the Boston Globe and the Los Angeles Times. This marks the artist's first solo exhibition with Von Lintel Gallery and her third in New York. Willhide lives and works in Los Angeles.