"Italian futurism 1909-1944" continues the museum's series on the phenomena of Modernism. Covering the whole lifecycle of Futurism, the exhibition displays paintings, sculptures, sketches, architectural designs, objets and furniture. Sophie Calle's "Take Care of Yourself" video gets its name from the last words of an e-mail sent by Calle's ex-boyfriend ending their relationship. Mixing private and public life is characteristic of Calle's work. 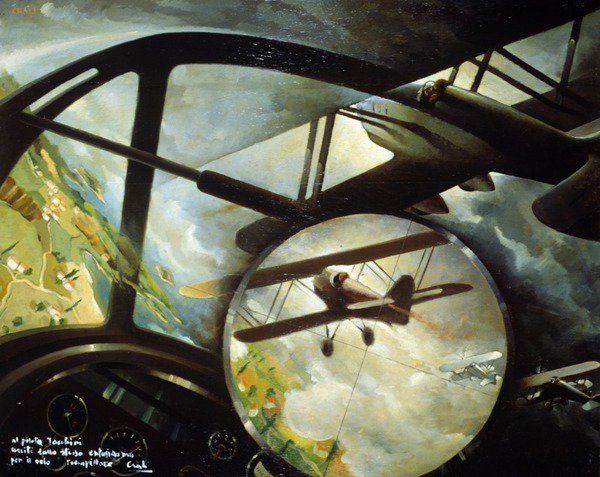 Sophie Calle
Take Care of Yourself

EMMA’s second spring exhibition is Sophie Calle’s extensive video, text panel and photographic installation Take Care of Yourself. The theme is an email Calle received from a male friend called ”X” terminating their relationship and ending with the words “Take care of yourself”.

Calle sent a copy of the email to 107 women – artists, writers, scientists – chosen for their profession or skills to interpret this letter. The work is based on the countless different ways in which the women responded, analysing and interpreting the letter, and helping her to “take care of herself”. It resulted in both touching and humorous interpretations, which together compose this impressive installation as letters, compositions, drawings, songs and dances.

The original French-language version Prenez soin de vous was one of the highlights of the Venice Biennale in 2007.

The conceptualist Sophie Calle (born 1953) is one of France’s most internationally known artists. She constructs her works around herself, narrating stories she has personally experienced in which the viewers’ role can be either viewer or experiencer or even narrator. What is typical of her works is that she creates a fictive story about her own and others’ lives, the motif often being that of identity and intimacy.

The conceptualist Sophie Calle (born 1953) is one of France’s most internationally known artists. What is typical of her works is that she creates a narrative about her own and others’ lives, the motif often being that of identity and intimacy.

Futurism was an important art movement in Italy in the first half of the 20th century. Focussing on the new urban world and concept of man, it scorned all that was old and traditional, and glorified machines, technology, speed, noise and movement.

“We declare that the splendour of the world has been enriched by a new beauty: the beauty of speed. A racing car with its bonnet adorned with great tubes like serpents with explosive breath ... a roaring motor car which seems to run on machine-gun fire, is more beautiful than the Winged Victory of Samothrace.”

The fourth thesis of the manifesto published by the Italian poet and editor Filippo Tommaso Marinetti (1876-1944) in La gazzetta dell’Emilia on 5.2.1909, later reproduced in the French daily Le Figaro, crystallises the whole philosophy of Futurism: a noisy racing car versus the classical marble statue.

In addition to issuing manifestos, the Futurists organised mass meetings, provocative and absurd performances, which frequently ended in riots.
Futurism, one of the lesser known ‘isms’ of the arts, thrived particularly well in Italy into the 1940s. It was expected to lead to an international revolutionary movement that would influence social thinking in addition to the arts. Its influence was most clearly seen in Russian, Germany and Great Britain, but in Finland, for example, it found no echo.

With its impact on literature, music, the visual arts, cinema, design and theatre, Futurism was part of the general political, industrial and cultural turbulence in Europe at the time. In Italy it acquired powerful nationalist overtones. The Futurists denied the past and aimed at creating an entirely new culture.

The Futurists were attracted to everything that symbolised modern life: noise, hubbub, machines, gadgets, speed, movement and violence. They welcomed the outbreak of the First World War as a chance to destroy the old, but soon the sheer brutality of it caused many of them to change their attitude.

The new exhibition at EMMA continues the museum’s series on the phenomena of Modernism. The fascination with machines and speed, like Futurism in general, is very masculine, so out of the 52 artists represented, only three are women. Covering the whole lifecycle of Futurism, the exhibition displays paintings, sculptures, sketches, architectural designs, objets and furniture. Futurism never differentiated between abstract and representational art, what was important in these powerful colourful works was movement. The most popular motifs were machines, cars and aeroplanes, but they were also populated by people and animals.