King of the Wild Frontier presents two large new bodies of work. The first is a group of canvases depicting his familiar Somali pirate series. The second part of the exhibition is a recreation of Vandal's Bedroom, the sprawling, graffiti filled structure that was a highlight an exhibition recently shown at LA MOCA. 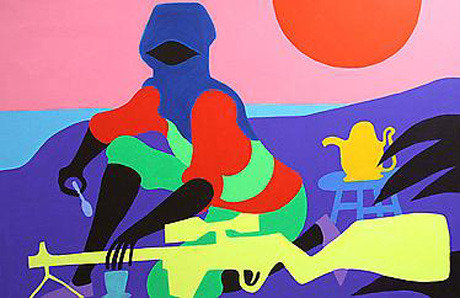 GERING & LóPEZ GALLERY is pleased to present King of the Wild Frontier, a solo exhibition of new work by New York-based artist Todd James. This will be James’ second exhibition with the gallery.

In this exhibition, James presents two large new bodies of work. The first is a group of canvases depicting his familiar Somali pirate series. No longer on roughly cut sheets of paper, these oil paintings dominate the gallery with their crisp shapes, large scale and emotive brushwork. The new medium accentuates characteristics of James’ work, namely the seductive colors and fluid lines of its subjects. These pirates are masked in headgear, smoking cigarettes, having tea at sunset. They bear hand-me-down AK-47s and RPGs, the looping shapes of their bullet belts and gun straps echoing 1970s graffiti letterforms. In the distance, their quarry - cargo ships - is represented by blocky shapes squatting on the ocean’s horizon. These works address David and Goliath themes of survival, justice, ingenuity, ownership, and difference.

The second part of the exhibition is a recreation of Vandal’s Bedroom, the sprawling, graffiti filled structure that was a highlight of the Art in the Streets exhibition recently shown at LA MOCA. The New York version of the work is equally dense with information. Part object, part installation, this teenage vandal’s bedroom-turned-graffiti-battle-station gives glimpses of plans for an imaginary artistic takeover. Bleeding marker drawings form letter styles from the rough & tumble 1980’s New York subway era, combined with repurposed cartoon characters performing decidedly off-model activity. A clutter of color, slogans, fantasies, and affiliations is all barely contained, ready to spill out of this eat, sleep, and breathe environment. The piece is a celebration of early influences and an exercise of traditions that remain relevant, holding up better than ever.

According to James, both vandals and pirates step over invisible boundaries put in place by faceless power structures every day. Both also anonymously make claims (to space or to cargo), their deeds forcing society to confront the undeniable complexity of right and wrong. It is this sense of injustice that informs and energizes James’ work. The fact that James is able to do this with a generous amount of humor is his unique ability.

Todd James has had numerous one-person exhibitions internationally, including New York, Tokyo, Madrid, Brussels, Melbourne, London and Copenhagen. His most recent exhibition, a large collaborative installation for Art in the Streets at The Geffen Contemporary at MOCA, Los Angeles, CA in 2011, was a critical and popular addition to that show. James currently lives and works in New York.