Following Sol LeWitt and Pedro Cabrita Reis, Kienzer has created a giant sculpture for the upper space of the Kunsthaus Graz. Thorsen presents three large work in which she finds in the reduction to the pure, symbolic nature of the contents a certain distance to places and situations, which she analyses with the means of the medium concerned. 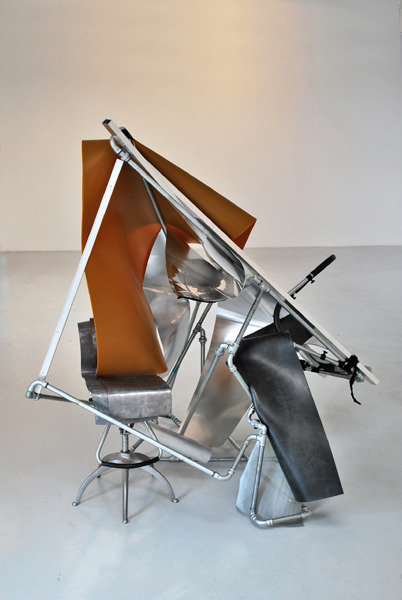 Michael Kienzer (*1962) marks a significant position in contemporary Austrian art. His work examines and at the same time looks to break away from accepted viewing habits using a minimalist inspired sculptural idiom that is taken apart into its tactile, semantic and communicative elements. Thereby he is dissecting perception into aspects of description and vision, questioning it through unusual circumstances that often seem to follow a strange or comical logic. His work takes the audience on a journey that explores the seemingly self-evident construction of everyday knowledge.

Following Sol LeWitt and Pedro Cabrita Reis, Michael Kienzer has created a giant sculpture for the upper space of the Kunsthaus Graz. Like the line of a drawing veering out of control, his work opens up the space, surveying and critically measuring it. In the context of other current works, questions are raised about the meaning of participation in sculpture, the incomplete and one’s position with regard to the past and future of art.

Beginning with his preoccupation with different materials and their semantic and social significance, Michael Kienzer has made works in a wide variety of media: from graphic design to drawing and sculpture, he deals with categories of language, space, time, surface, concentration and also with the conditions of participation. In 2001 he was awarded the Otto Mauer Prize and in 2010 the Recognition Prize for Art in Public Space of the Province of Lower Austria.

In her works Sofie Thorsen (born in Århus, Denmark in 1971, lives in Vienna) is dedicated to the process of seeing, to light and its role in various media. In the three work complexes which she presents in the Kunsthaus Graz as well as in the Kunsthaus Baselland, she finds in the reduction to the pure, symbolic nature of the contents a certain distance to places and situations, which she analyses with the means of the medium concerned.

The eponymous film Cut A-A’ concerns a cinema that is attached to a museum, built in the 1970s, seemingly utopian and fallen out of favour. As a collage-type, highly contrasting sequence of images rowed up next to each other, it is devoted to the abstract recreation of a view of what architectural form communicates. The film, which forms the basis of the trailer for the Diagonale 2012, will finally be shown in autumn 2012 in its place of origin—the Open Air Cinema of the Museum of Modern Art in Bratislava—before this venue is demolished and assigned to oblivion.

Thorsen’s works oscillate between a perceptible copy of reality, and possible fiction—and in this way open up new realms of association in front of the viewer.

A catalogue published by Silvana Editoriale accompanies the exhibition. Besides a comprehensive section with illustrations and installation views, the catalogue contains an introduction by exhibition curators Katrin Bucher Trantow, Katia Huemer and Sabine Schaschl, as well as an essay by Christian Teckert. Precisely analysing the works in the exhibition, Teckert sheds light on Thorsen’s artistic process as an examination of the forms of visibility and the ruptures in the aesthetic of modernism.

The exhibition has been developed as a collaboration with the Diagonale and the Kunsthaus Baselland.