The Paradise The Downfall. This retrospective focuses on media works of the artist. They have key role in which is played by the partial reconstruction of his legendary exhibition in 1977 was shown for the duration of just one hour. 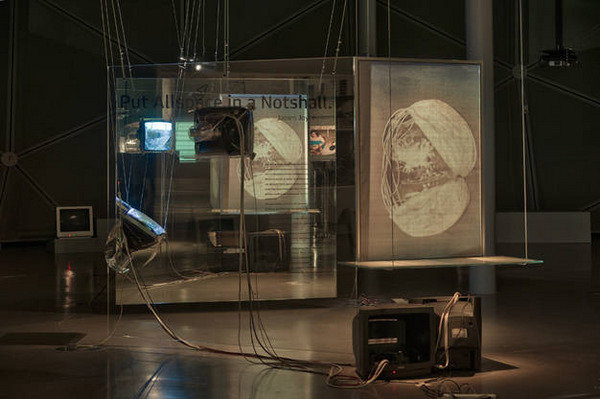 The work of Graz-based artist Hartmut Skerbisch (1945–2009) can be seen as contributing to a second generation of Austrian conceptual artists. When Skerbisch arrived as an artist in 1969, an atmosphere of renewal prevailed in Graz—the process of interaction with international art developments was well under way. Information received before others and a bold commitment, not only on the part of provincial politicians, accounted for a highly advanced art scene.

His focus lay from the outset on questions about space. Whether it is his first architectural designs, his media works, sculptures or dialogue with literature and music, the issue of space is always present. Electronic space removes places, brings the far-off nearer and re-defines space—it attempts to lead us to our present. In this, art offers a framework in which the public is to have a share.

Starting with the media installations Spatial Arrangement: Putting Allspace in a Notshall, 1969/2012—a joint work with Manfred Wolff-Plottegg, today owned by the Universalmuseum Joanneum—the exhibition at the Kunsthaus Graz chiefly traces the artist’s media works. A key role is also played by the reconstruction of his legendary exhibition zepter und gleißender stein, which in 1977 was shown at the Neue Galerie Graz for the duration of just one hour.