A Homage to Korean Architecture 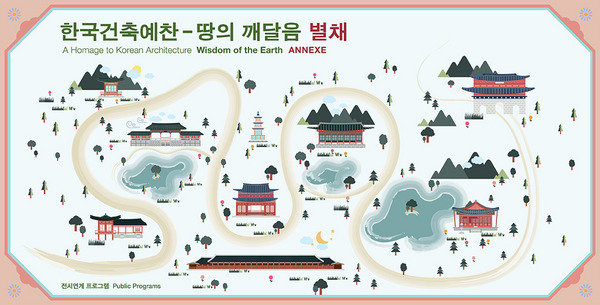 Leeum, Samsung Museum of Art hosts the exhibition Homage to Korean Architecture: Wisdom of the Earth, the museum's first ever devoted to Korean architecture, which embody the wisdom of our ancestors passed down over a thousand years. Marking the 50th anniversary of the Samsung Foundation of Culture, it is held in conjunction with a project to publish a photographic collection of Korean architecture as part of the Foundation’s efforts to promote the country's traditional culture at home and around the world. The exhibition features photographs of royal palaces, Buddhist temples, and traditional houses taken by six prominent Korean photographers--Joo Myeong-duck, Bae Bien-u, Koo Bohn-chang, Kim Jae-gyeong, Seo Heun-kang, and Kim Do-kyun--with architecture-related old maps, paintings, artifacts, and replicas. The juxtaposition of such works reflects Leeum's defining mix of traditional and contemporary art. Taking full advantage of state-of-art information technology, including digital magnifiers and 3D images, the exhibition beautifully fuses tradition and modernity. It also reflects the spirit of the ancestors who placed paramount importance on the harmonious relationships among heaven, earth, and human beings, and to enhance visitors' understanding, explores traditional architecture under the categories of religious architecture, royal palaces, city walls, government offices, and the homes of ordinary people.

Land of Silence and Majesty
Part Ι focuses on representative Buddhist temples that reflect Koreans’ religious views and spiritual world, including Haeinsa Temple, Bulguksa Temple, Tongdosa Temple, and Seonamsa Temple, as well as Jongmyo, the royal shrine of Joseon, which most clearly illustrates Confucian influence during the Joseon Dynasty. In this particular exhibition hall, visitors can experience the spirituality, sublime beauty, and the height of architectural beauty found in Confucian and Buddhist architecture. To that end, the works of contemporary Korean photographers are displayed together with Buddhist architecture-related artifacts such as Yongdubodang (miniature Buddhist flagpole with dragon finial), Yongdutosu (dragon-head ridge-end ornament), and Amita seolbeopdo (a painting of Amitabha preaching). Research models, which show the layout of Buddhist temples, and 3D restored images of Seokguram Grotto, the epitome of stone construction and Buddhist culture, which flourished in the Unified Silla period, will also be displayed with other special exhibits that examine the architecture of Jongmyo, the ancestral rites called Jongmyo Jerye, and the ritual music called Jongmyo Jeryeak.

Management of Sites and Construction of Order
Part II features photographs of royal palaces, city walls, and government office buildings including Changdeokgung Palace, Gyeongbokgung Palace, and Hwaseong Fortress in Suwon, which are regarded as the architectural gems of Joseon. The exhibited works shed light on how the capital city, the city walls and the palaces were built and managed by the royal family and the ruling class from the perspective of geomancy and site management. With photographs of Changdeokgung and Hwaseong taken by contemporary photographers, old maps, and valuable architecture-related paintings and documentary paintings are also on display. The old maps include Dongguk daejido (Great Map of the East Country) and Hanseongdo (Map of Hanseong); valuable architecture-related paintings and documentary paintings include Donggwoldo (Painting of the Eastern Palace), Gyujanggakdo (Painting of the Royal Library), Hwaseong seongyeok uigwe (Record of the Construction of Hwaseong Fortress), and Hwaseong neunghaengdo, a folding screen depicting the royal procession to Hwaseong. In addition, a large-scale model of Gyeongbokgung and the Street of Six Ministries back in the late 19th century is featured alongside Sukcheon jeado (Illustrations of My Places of Work), produced by Han Pil-gyo (1807-1878), a scholar-official of the late Joseon period. It is the first time this book, preserved at Harvard-Yenching Library, is on display in Korea.

Spaces of Life and Social Activity
Part III of the exhibition focuses on traditional architecture of the ordinary people where nature, buildings, and people harmoniously co-exist, giving visitors a glimpse of the places in which ordinary people lived. In this part of the exhibition, the participating photographers attempt to show from various angles Yangdong Village in Gyeongju with its layout adapted to the natural terrain and the collective landscape presented by the buildings, Dosan Seowon (a private Confucian academy) that embodies the Neo-Confucian view of nature, and Soswaewon, the quintessence of a private garden of Joseon. Also on display is Gyeonggi gamyeongdo (Folding Screen of the Gyeonggi Provincial Office), which allows visitors a close look at the residential environment during the second half of the 18th century, as well as Soswae sasil (Record of Soswaewon), a document about the garden Sosawewon. Furthermore, to help visitors clearly understand the characteristics and structure of a traditional Korean house, or hanok, 3D images depicting the construction process of Gwangpunggak Pavilion in Soswaewon accompany a life-size replica of Mucheomdang House in Yangdong Village.