The exhibition features photographic and installation works by four young Austrian artists. Elisabeth Czihak shows an installation work consisting of colour photographs and large-scale use of black-and-white wallpaper, Catharina Freuis her Galerie-Raum series completed two years ago, Markus Guschelbauer intervenes in the landscape by installing non-natural materials and Michael Strasse intervenes in real rooms and transforms them, using surreal-seeming settings, which are specially designed for use in his photo and video works. 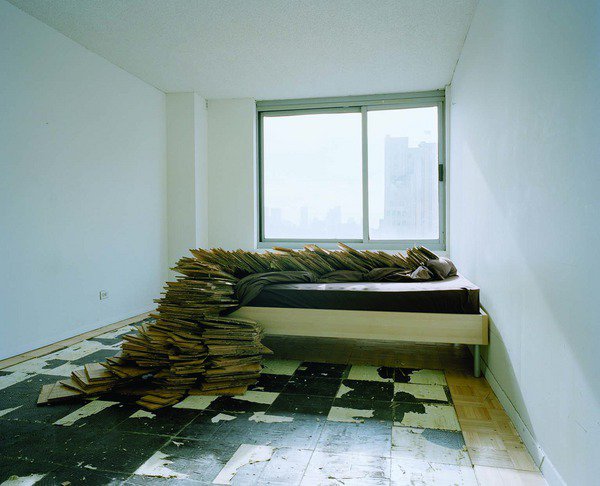 The FOTOGALERIE WIEN’s first exhibition of 2012 is showing photographic and installation works by four young Austrian artists. They are all concerned with (pictorial) space - intervening in it, expanding it, opening it up or reconstructing it. In addition to its designation as a fixed, architectonic construct, these artistic interventions make it possible to experience space as “living” and mutable. At times the resulting images take on a bizarre, surreal or even uncanny character and all of the works involve irritation in relation to customary ways of perceiving space and architecture or the relationship of humans to space.

Elisabeth Czihak is showing an installation work consisting of colour photographs and large-scale use of black-and-white wallpaper. The piece deals with an irritating interlacing of different spatial situations and levels. The wallpaper motif was first realized by Czihak in 2009 as a proliferating abstract drawing on the walls of an empty industrial building. At the FOTOGALERIE WIEN she will position on top of that, and alongside it, colour photographs from the Otto S series. These are non-staged depictions of deserted interior spaces, of an abandoned place that contains only traces of its former occupant, Otto S., evoking thus an “emptiness” that opens up a great deal of space for possible stories.

The photo works of the Galerie-Raum series by Catharina Freuis were completed two years ago. They are not based on real rooms but on invention, relying on room models that are, however, based on images from collective memory. These artificial spaces are so meticulously detailed that they appear deceptively real. As the series progresses, the rooms undergo an escalating 'take-over' by a proliferating form which eventually occupies the whole space, transforming it into the realms of the surreal. Because of the artist's intervention, the room increasingly begins to “move”, it undergoes deformation from within and loses the rigidity of its architectural construction. The work is a reconsideration of the definition of space, perception, reality and fiction as well as the medium of photography.

Markus Guschelbauer's main concern as an artist is an engagement with the subject of landscape and the oppositional pairs of cultural space and natural space, civilization and idyll. He intervenes in the landscape by installing non-natural materials such as plastic sheeting, fabrics and other materials thus creating optical contradictions or surreal constellations of images which he then records in photographs or on films: “Plastic sheeting is an important component in my work and when it is inserted into the landscape, it becomes transformed into an independent, seemingly natural life-form”. (M.G.) Guschelbauer considers his interventions as acts of forming, cultivating and ordering nature but also as abstraction aimed at developing a new definition of landscape.

Michael Strasser's artwork alternates between photography, installation, sculpture and performance. The main focus of his interest lies in investigating the relationship between humans, space and architecture as well as in analysing the relationship between representation and reality. Using surreal-seeming settings, which are specially designed for use in his photo and video works, he intervenes in real rooms and transforms them. The photo series Domestic Sculpture Garden was made in abandoned living rooms, houses and hotels. Using materials he found there – such as carpeting or parquet flooring elements – Strasser built whimsical sculptures or installations and recorded them in photographs or on films. These temporary constructions not only alter the rooms, but also the relationship between space and humans.

Petra Noll, on behalf of the collective