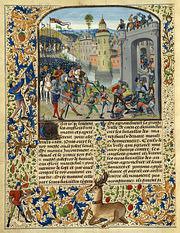 Both exhibitions organized in Paris and Brussels propose an outstanding overview of the history of Flemish miniatures. The collections on display - that had been broken up over time - gather a variety of large-scale richly illuminated manuscripts that were the jewels of princes' libraries in the 15th century. Most of the documents belonged to the collections of the Dukes of Burgundy or of people around them. Among them, Philip the Good, who laid hands on all southern Netherlands, was much involved in patronage because of political ambition. He commissioned numerous manuscripts to the most talented illuminators recruited on his lands. As a booklover, he was imitated or encouraged by his courtiers. Charles the Bold followed his example. This patronage opened the way to new literary works and translations. Illuminated works are very ostentatious objects; moreover, they contain original and often profane iconographic images that were an opportunity for the artists to innovate in the field. Some of these artists are famous such as Roger van der Weyden or Simon Marmion. However, some others remained unknown despite a strong artistic personality The wealth of collections housed at the Royal Library of Belgium and the Bibliotheque nationale de France offers the opportunity to present very different works in the two capitals. Maybe the manuscripts will not be the only ones to go to and fro between one and the other library. Visitors may also enjoy to travel.