The Hague Museum of Photography

The Hague Museum of Photography, The Hague

This Must Be The Place. A comprehensive survey of the South African photographer's work from 2003-2011. The exhibition includes a selection of his most well-known series together with many previously unseen works The differences between the West and Africa, rich and poor, white and black are confronted in his vivid compositions. 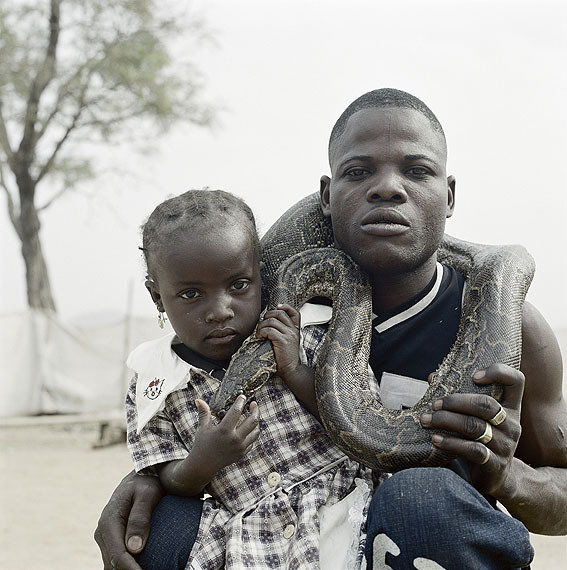 The South African photographer Pieter Hugo’s (Johannesburg, 1976) monumental photographs, centred around contemporary Africa, are now well known around the world. He has already won numerous awards including the KLM Paul Huf award in 2008 and was recently nominated for the Deutsche Börse Photography Prize 2012. The Hague Museum of Photography will be the first museum to exhibit a comprehensive survey of Hugo’s work from 2003-2011. Together with many previously unseen works, the exhibition will include a curated selection of his most well-known series: The Hyena & Other Men, the bizarre Nollywood and the striking Permanent Error. His impressive portraits tell personal stories about recurring themes throughout his oeuvre, namely those people who inhabit the margins of society in Sub-Saharan Africa.

The differences between the West and Africa, rich and poor, white and black are confronted in Hugo’s vivid compositions. Many of his series are prompted by newspaper articles, or radio and television pieces, which he finds compelling. He came in contact, for instance with the group of men who travel around Nigeria with hyenas and pythons, through an image sent via cell phone camera by a friend. He decided to accompany the group on their travels, and the outcome of this experience is The Hyena & Other Men (2005-2007), a series of portraits from a travelling group of street performers, who together with their — sometimes forcefully — tamed animals earn money to continue travelling.

In the series Permanent Error (2009-2010) he offers portraits of young men and woman who live amidst an immense waste dump of broken computers, mother boards and keyboards. To earn money these young people burn the computers dumped here as a means to extract valuable metals. The dangerous and poisonous vapours produce a hell on earth, where the quality of life is already challenging. The people who pose for Hugo stand in front of the camera with a defiant self-confidence.

From a different perspective comes his series about Nollywood (2008-2009) in Nigeria, the biggest film industry in the world after Hollywood and Bollywood. Here, stories that have for centuries been part of an oral tradition are told in dramatic films in which a central role is reserved for themes such as romance, witchcraft, bribery and prostitution. It is this world, where the everyday and the surreal exist simultaneously, that Hugo finds fascinating. In this series Hugo depicts actors and assistants posing in the role of movie characters. The result is an absurd tableau such as a photo of a half-naked woman sitting on a bed with a bloody knife stuck between her breasts. All the while she stares blankly at the camera. In another image, a woman well-dressed in Nigerian clothing sits completely unfazed by the man next to her made-up as the devil.

Publisher Prestel - Munich will produce a concurrent book, Pieter Hugo - This Must Be The Place (€49,95) with essays by T.J. Demos and Aaron Schumann. Design by Maarten Evenhuis.

Image: Mummy Ahmadu and a snake charmer with a rock python, Abuja, Nigeria, 2005. From the series The Hyena & Other Men © Courtesy of Stevenson Gallery, Cape Town / Yossi Milo, New York

stampa
permanent link
The Hague Museum of Photography
IN ARCHIVIO [8]