The Hague Museum of Photography


The Hague Museum of Photography

The Hague Museum of Photography, The Hague

Anticorps. He positions himself on the boundaries of society, depletes his body and feels the same pain and despair from night-time excesses as the prostitutes and addicts he photographs. For him is this the only way for a photographer to mirror reality. 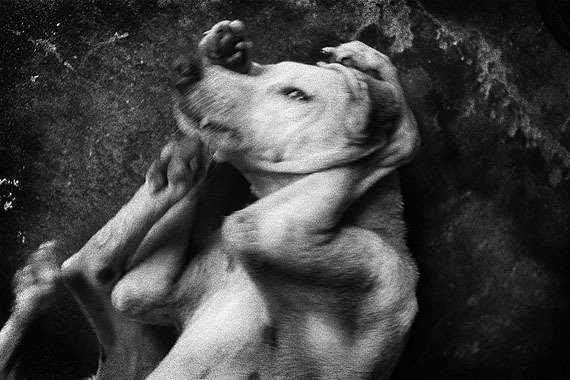 At the Fotomuseum Den Haag the difference between day and night characterizes the next exhibition and first overview of the internationally recognized French photographer Antoine d’Agata (b. 1961). By day, d’Agata produces journalistic assignments. Daytime presents vivid portraits, journalistic photographs from the Middle East with bombed cities and mass graves, and architectural images, which emphasize the structure of things. Night is the personal domain of d’Agata, where his role changes from observer to participant. During the night, he photographs that which the daylight conceals: dimly lit brothels with prostitutes, junkies and outcasts. Everyone is seen as a fleeting impression, photographed without flash, so that distressing parts of the scene are hidden from the eye. The scenarios are pictured like a dream or a moment of intoxication, sex and drug use are recognizable, yet veiled, as the bodies appear grainy and indistinct.

Antoine d’Agata work asks where and what is the position photographer. Gradually, his position shifts from behind to in front of the camera. He is not in the image, but is rather part of the scene that the photograph records. Furthermore, he lives the life of those he photographs. He positions himself on the boundaries of society, depletes his body and feels the same pain and despair from night-time excesses as the prostitutes and addicts he photographs. For him is this the only way for a photographer to mirror reality.

Whether producing day or night, everything indicates that Antoine d’Agata sustains a quite obscure picture of the world. The intoxication of drugs and drink covers his night work like a shadow, but d’Agata’s day is also grey; in his work there is no place for happiness. Light and colour break down. His work is immune to moralism; it is rightly disruptive, anti-social and unmoored. If you have nothing, then self-destruction is your only freedom, so is his opinion. In this freedom he sees an ideal art; completely separated from social norms, through which society can penetrate the rawness of reality.

Antoine d’Agata was born in Marseille. In 1983 he left for the United States where he remained for ten years. He followed courses at the New York International Center of Photography where he was taught by Nan Goldin and Larry Clark. Since 2004 he has worked for Magnum Photos. He does not have a permanent residence; he works and lives all over the world. Antoine d’Agata. Anticorps is the world premiere of a grand touring overview curated by Fannie Escoulen and Bernard Marcadé.

The exhibition is a co-production of Fotomuseum Den Haag with LE BAL in Paris and Forma in Milan.

stampa
permanent link
The Hague Museum of Photography
IN ARCHIVIO [8]