In the Belly of the Whale (Act III) 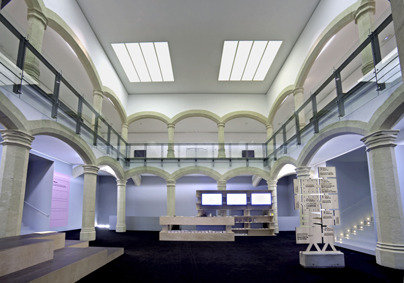 A curatorial project selected from the Art and Research 2011 call for entries. The initiative seeks to promote the production of new work and collaboration between artists, curators and Montehermoso.

Interior.
Montehermoso, a centre for contemporary art.
A group show around themes of rehearsal, repetition and version.
The exhibition space is imagined as the belly of a great white whale.

You are entering an exhibition concerned with rehearsal and its related notions of version, repetition and failure. As a ‘controlled form of chaos’ or ‘unfinalised potential’ ( to paraphrase Robert Baker-White and Roland Barthes, respectively), the works brought together here create a psychological space that constantly denies the viewer a final conclusion.

When used as a strategy, the rehearsal foregrounds that which takes place on the periphery and that may be obscured by presenting a polished piece – principally, the untidy process of thought and consideration. Similarly, this show shines the spotlight away from the finished product and onto the open-ended, experimental, hidden or doubtful.

Côme Ciment imagines a future version of this exhibition that takes place underwater in 2059; Donna Huddleston's Smoke Garden comprises a series of objects made in preparation for a performance about women, featuring the musical triangle; Adam Chodzko has recorded 'actors' working silently on stage and pressed the material into a vinyl record that is played throughout the exhibition space; and Anthea Hamilton's sculptural screens made of knotted rope and steel were inspired by John Huston's film version of Moby Dick (1956). On the opening night, Jacopo Miliani will present Actors, a work for two performers standing too far apart to be heard at once. As well as the works contained within the gallery, the exhibition features a radio programme in three parts by Jesse Ash and Cally Spooner.

The title of the exhibition takes inspiration from Orson Welles’s lifelong obsession with Moby Dick, of which he directed and appeared in at least three different adaptations: once on stage – in a play about a rehearsal of a stage adaptation of the novel – and twice in related, and uncompleted, film projects.

It is said that Welles considered the theatre hall of his play to be the belly of the whale in which the actors are unwittingly trapped, and for this exhibition, the distinctive and vast gallery space of Montehermoso – the former water tank for the city – becomes the metaphorical belly of the whale: its columns and arches reminiscent of a ribcage and the proscenium arches suggesting a traditional theatre. It is a framework for a show featuring works of film, sound, performance installation and sculpture.

Jacopo Miliani's Actors will be performed once at the beginning of the exhibition, at 21:00 on 2 March at Montehermoso, and once at the end.

Centro Cultural Montehermoso Kulturunea
Fray Zacarias Martinez, 2 01001 Vitoria-Gasteiz (SPAIN)
From Tuesday to Sunday, from 11 to 14 and from 17 to 21.
Closed on Monday.