Heart to Hand emphasizes the exchange between artist, artwork, and audience, namely the moment at which a piece of heart is offered into the hands of the public. Maquette for a Museum of Switzerland by Jimmie Durham is an institutional-like setting, questioning national cliches and symbols and containing objects, masks, photos, and texts by the artist. Combining limitless pattern, lustrous texture, and traditional motifs Nicolas Party re-negotiates the divisions made between public and private space. 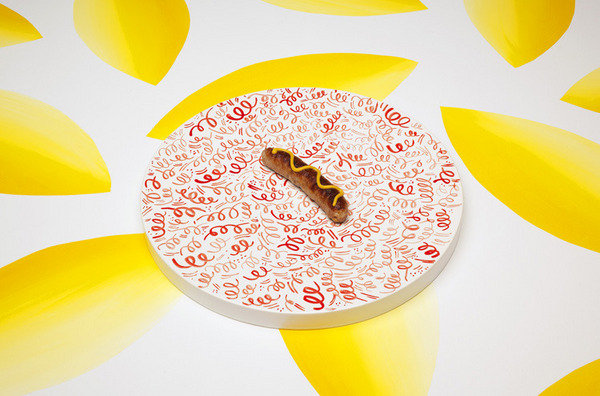 The exhibition will include a selection of works by contributing artists Zoe Leonard, Klara Liden, Adam Pendleton and Oscar Tuazon/Elias Hansen. Conceived in the wake of the #occupywallstreet movement and the Republican primaries, Hertling’s exhibition addresses the relationship between aesthetics and social conscience. At first sight, the selected artworks are formally abstract, yet upon further meditation, their conceptual disobedience is revealed.

The works in this exhibition suggest and provoke political themes yet leave the response and action to the public. Taken as a whole, the exhibition questions the role of art in times of heightened political consciousness. Problematizing the contingencies of a social contract, it points to an intuitive overarching process. Albeit visceral and rare, Heart to Hand emphasizes the exchange between artist, artwork, and audience, namely the moment at which a piece of heart is offered into the hands of the public.

Jimmie Durham
Maquette for a Museum of Switzerland

The work of Native American artist Jimmie Durham (b.1940, lives in Rome, Italy) is manifold–as poet, former activist, essayist, and sculptor he deftly mines the fields of art and political reality, infiltrating culture industries in ways that are both ironic and ambivalent. The contemporary work of Durham plays upon the construction and build up of a “postmodern savage.” Durham’s Maquette for a Museum of Switzerland is an institutional-like setting questioning national clichés and symbols and containing objects, masks, photos as well as texts by the artist.

Artist’s Statement
“Switzerland is a unique and exotic enclave of “a”, more than “anti-“ European culture. Its native arts and festivals have been largely hidden even within the country. “Maquette for a Museum of Switzerland” is an attempt to show a part of the delightful culture of the country, with the view of establishing a Swiss center in a proposed museum of Europe in the future. In both instances emphasis will be placed primarily on pre-christian and non-christian phenomena. (although in the ‘Maquette’ there will be a brief look at both watchmaking and banking.)”

Hailed as painter, illustrator, and graffiti artist, the praxis of Swiss artist Nicolas Party (b. 1980, lives in Glasgow, Scotland) is an earnest investigation into painting techniques and art historical sources. Party’s intervention at Swiss Institute brings together wall drawing, sculpture, and painting. The artist will create a brightly-colored, hand-painted pattern extending from Swiss Institute’s lobby to its office and stairwells. The decorative treatment establishes an expansive visual field, interrupted and punctuated by three large-scale, still-life charcoal wall drawings. Combining limitless pattern and traditional motifs, Party re-negotiates the divisions made between public and private space.