Deep wood drive. Integral to the exhibition are works which are wooden wall panels covered with woolen blankets meticulously arranged and pinned to convey states of comfort and discomfort, order and disarray. These works are shown alongside large floor-bound sculptural tableau that engage notions of containment, biography, and protectionism in the context of public view. 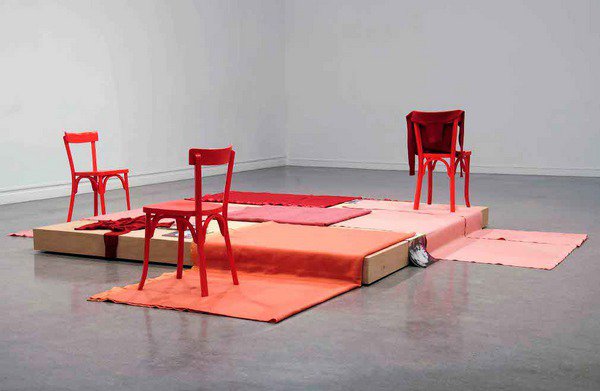 Bortolami Gallery is pleased to present Tom Burr's second exhibition with the gallery, deep wood drive, from March 7th to April 26th, with a reception for the artist on March 7th from 6 to 8pm. In deep wood drive Burr continues his visual exploration of the physical and psychological dimension of objects, and the fantasies we project upon their surfaces. Integral to the exhibition are works from the new series of "Cloud Paintings," which are wooden wall panels covered with woolen blankets meticulously arranged and pinned to convey states of comfort and discomfort, order and disarray. These works are shown alongside large floor-bound sculptural tableau that engage notions of containment, biography, and protectionism in the context of public view.

Tom Burr emerged in the 1990s as an important new voice in the dialogue of institutional critique, exploring the politics of minimalism and politics at large that were at the forefront of artistic and social concerns during the period. In an Artforum article in 2008 Joshua Decter described the artist's work as "engaging in a lively and erudite reconsideration of the historical conventions of site-specificity; the politics of public and private domains; the architecture of social space; the aesthetics of design and fashion; Minimalist and Post-Minimalist legacies; and the paradoxical nature of the postmodernist critique of originality." Burr is renowned for his interest in the conceptual investigation that questions the way in which identity is both constructed and constrained by society and its physical spaces.

Burr describes the "Cloud Paintings" as "imprints, instead of having the neutral associations that various materials hold: canvas, fabric, paint, ink, etc., the blankets hover solidly between being a utilitarian object and a material that conforms to the work of a painting. Or, as I've said before, a painting that is impersonating a sculpture, or inversely, a sculpture impersonating a painting."

Another highlight of the exhibition is a large eight-foot black metal cage, a theme that the artist has employed before, entitled baited like beasts. It will sit in the center of the gallery's main room, both blocking the space and framing it. There is no door to the cage, instead there are three openings, cut outs, or windows through the bars. Within these cuts will be hanging, lying, extending and protruding electric lamps.

Tom Burr (b. 1963) has exhibited at some of the world's foremost galleries and institutions including The Whitney Museum of American Art, New York; The Sculpture Center, New York; FRAC, Champagne-Ardenne, France; Museum für Gegenwartskunst, Basel; Louisiana Museum, Denmark; The Hayward Gallery, London and The New Museum of Contemporary Art, New York, amongst others. Burr was a visiting Critic at Yale School of Art, Graduate Program in Sculpture. His work is included in prestigious public and private collections around the world.