'Industrie' shows a reinvention of the factories and installations of the industrial revolution. Large scale sculptural/technical installations are made in an improvised style with contemporary materials. 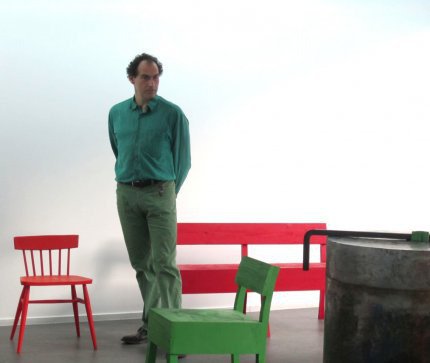 Tim Van Laere Gallery is pleased to announce Industrie (Industry), Atelier Van Lieshout's fourth solo exhibition at the gallery. The exhibition will be part of Atelier Van Lieshout's large project the "New Tribal Labyrinth series" in which the recurring themes of work organization, power structures and revolution are mixed up with autarky, proposing a new tribal organization. The New Tribal Labyrinth is a proposition for an alternative world organization by an imaginary tribe. Farming, Industry, and objects for rituals are the 3 main bodies of work of this huge 'Gesamtkunstwerk".

Industry: shows a reinvention of the factories and installations of the industrial revolution. Large scale sculptural/technical installations are made in an improvised style with contemporary materials. It is not clear if they are a post-apocalyptic survival strategy or a new utopian way of honest production of durable product. A blast furnace, metal working machines, textile production machinery, refinery and chemical installations, ceramics etc. will be part of it.

Industry was initially a very vital element in the development and prosperity of civilization where it enabled a society based on farming to emerge into a highly civilized society. Nowadays a large part of industry and production is banned from our society and the whole branch is moved to another part of the world. All the things which are not desirable are banned from our society; farm animals disappear in anonymous buildings, prisons, and mental institutions disappear in remote business parks. The only thing left in our sanitized world is retail, service industry and gastronomy. Industry and production, should be a part of our society just as manual labor, pollution and hardship. As a society we cannot just consume and use, real products should be made and grown.

Farming, the second column of the New Tribal Labyrinth, with is end goal a huge life size farm that consist of many other farms that are connected with tunnels, corridors, doors and hatches. Shows farms from the pre-history, year zero, middle ages, golden age, post-war modernist utopia and the future. When entered it will be a large labyrinthic travel through the ages; history, hope, family, utopia, self sufficiency, design and deviancy.

The last column Tribe, reflect upon our extremely advanced and complex society in which over-consumption and limited raw materials play a crucial role. These changes will see an emergence of various new cultures in the near future. Once supplies are exhausted society will see a harshening of relations between people and increased survival instinct which raises the question whether such radical changes, which are coupled with violence but which may also lead to a new improved society, are good or bad. A New Tribal organization will occur were groups of people start organizing themselves in tribes instead of countries and nationalities. Part of this are objects, installations and equipment made for this nondescript tribe. Places of warship, cannibalistic sacrifices, daily objects and design.

Atelier Van Lieshout (AVL) is the internationally recognized studio and workshop of Dutch artist Joep van Lieshout. Initially working as a solo artist, he started out producing objects in bright coloured polyester—the material that would become his trademark—since the early eighties. In 1995 he founded Atelier Van Lieshout, leading a group of like-minded individuals in his search for creative and aesthetic solutions.

Atelier Van Lieshout produces objects that balance on the boundary between art, architecture and design. Recurring themes in the work of AVL are power, politics and autarky, as well as a fascination for life, its creation and its end in death. With this body of work, both autonomous and commissioned, AVL has attained international recognition. Over the past 25 years, AVL has had exhibitions at major art institutions and collections worldwide. Atelier Van Lieshout's recent shows include De Kannibaal at Villa Zebra Rotterdam, Mirages by F93, Montreuil, France, IstanbulEindhoven SALTVANABBE Post 89, SALT, Istanbul, Turkey, Tribe, Atelier Van Lieshout's Installation Saucisson, Migros Museum, Hubertus Exhibition, Zurich, Switzerland, God Save the Queen, Centraal Museum, Utrecht, Agricola Novus at 13 Hectare, Heeswijk-Dinter.