Since 2009, Auerbach has created a body of work she calls 'fold paintings'. Inasmuch as they obscure the boundaries between two and three dimensionality, these paintings can be understood as an analogy that raises the possibility of a concept of four dimensions. Alexander Gutke works within the conceptual and minimalist tradition. Cameras, film- and slide projectors are some of the main components in his art practice. 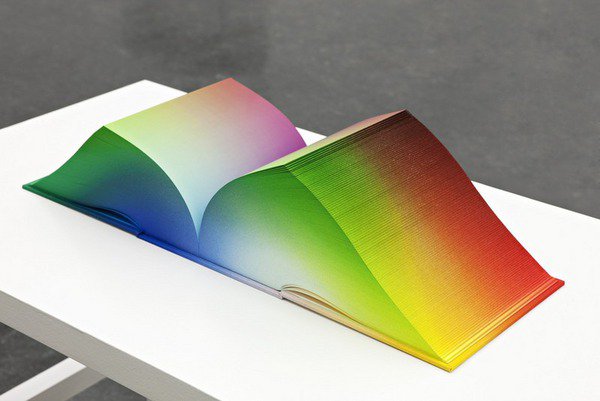 The exhibition has been initiated by Bergen Kunsthall, and is a collaboration between Malmö Kunsthall and WIELS Contemporary Art Centre, Brussels

In Tauba Auerbach’s work traditional distinctions between image, dimensionality and content collapse. Surface, specifically the larger issues surrounding topo¬logy, has been a central concern in her recent paintings, drawings, photographs and artist’s books. Auerbach interweaves discordant positions such as disorder and order, readability and abstraction, permeability and solidity – phenomena that are usually viewed as incompatible – into unified surfaces and volumes.

The title of the exhibition plays on the notion of ‘tetrachromatic’ vision. People normally perceive the world around them trichromatically (in three colours). Humans have three types of receptor for the perception of colour with varying sensitivities: red, green and blue. A new theory exists that there may be a small percentage of people (only women) who have a fourth colour receptor, which makes them ‘tetrachromatic’. In order to play on such ideas of a fourth component which, if it could be proven, would radically change our view of the world, Auerbach employs two analogies in this exhibition – the spatial (the idea of a fourth dimension) and the spectral (a fourth colour spectrum).

Since 2009, Auerbach has created a body of work she calls “fold paintings”. Inasmuch as they obscure the boundaries between two- and three-dimensionality, these paintings can be understood as an analogy that raises the possibility of a concept of four dimen¬sions. In these paintings she twists and folds the canvas, ironing or pressing it in such a way that the folds are embedded in the material. Then the canvas is spread out and spray-painted while it still has its three-dimensional contour. The result – after the paint has dried and the canvas has been stretched – is an almost perfect registration of the previous three-dimensional form of the surface. The surface takes on a trompe l’oeil effect as a convincing reproduction of three-dimensional form on a surface, not unlike traditional mimetic painting – but in this case based on inventiveness rather than painterly virtuosity.

Auerbach often works in series where she uses both digital and older craft-based methodologies, such as sign painting or weaving – not for nostalgic reasons, but to throw ideas surrounding ‘technologies’ into relief. So it is perhaps also a natural consequence that she treats painting as a technology on an equal footing with other visual forms of communication – from the cuneiform script of ancient Mesopotamia to digital printing.

The fold paintings relate directly to this way of understanding painting – as a technology where the mechanical qualities that are specific to the medium are exploited, but also force the painting to behave in ways we associate with other technologies. Recalling the photographic process, the painting is ‘developed’ in the course of the time it takes to spray-paint the surface, in the same way as an image is developed on photographic paper in the chemical bath in the darkroom, or on the film in the camera. Contrasts and contours in Auerbach’s paintings are similarly intensified by a longer ‘exposure’ of the paint on canvas.

Besides developing the series of fold paintings further, Auerbach has produced a whole new series of works for the exhibition at Bergen Kunsthall. In these she exploits various weaving techniques where the canvas is cut into strips, only to be woven together again in a series of different patterns designed by the artist herself. Instead of presenting spati¬ality by means of colours, she builds up the surface through pure structure and form. In these works Auerbach takes her point of departure in the corner figure which is precisely a precondition of three-dimensionality.

Tauba Auerbach has long worked with different types of book production. Recently these have developed into independent sculptural works that continue Auerbach’s research on multidimensionality and the importance of colour for spatiality. She presents several new book sculptures in this exhibition, and in a way these function as manuals for thinking about the project by constantly revolving around the question “How can we imagine what is impossible to sense?”

Although Auerbach draws much of her inspiration from mathematics and physics, her visual investigations deal equally with the basic themes of art history. Her paintings raise fundamental issues in new ways, among them the depiction of three-dimensional reality on a two-dimensional surface, and the relationship between abstraction and representation.

Alexander Gutke (born 1971) works within the conceptual and minimalist tradition. Cameras, film- and slide projectors are some of the main components in his art practice. Gutke uses them to explore space, light, shade, darkness and the infinity of the void. He investigates these technical apparatuses as objects and mechanical devices, and uses them as tools and objects in his works and narrative – creating a visual illusionism and a poetic and mystical materialism.

The cameras, 16mm film projectors and photographic devices that interests Gutke are somewhat out of date, but Gutke insists on the value of these 20th century wonders. He both examines and literally dissects these apparatuses and through the process he brings them back to life, to a new life. In 2005 Gutke produced the poetic work Exploded View, where the viewer visually travels through the inside of a Kodak Carousel slide projector slice by slice or slide by slide – over the course of 81 slides. This inner journey is shown on the same type of Kodak Carousel, whose interior is being explored.

Another work that investigates a slide projector and what it does is Lighthouse (2006); here a rectangle of light is slowly rotated 360 degrees slide by slide. The lyricisms of light and the machines are important focal points in Gutke’s body of work. In other works like the HD video projection Cine-scope (2008) he investigates the film material itself and takes the viewer on a filmic trompe l'oeil voyage. Stripped from any image or narrative storyline this large-scale projection shows – through real and simulated animated dust, scratches and chafes – the materiality of film and the heart of celluloid; its wear, tears and flaws.

Alexander Gutke’s exhibition at Malmö Konsthall will present a selection of film, sculpture, photography and rubberstamp works dating back to 2000, side by side with new works created for the exhibition.

Alexander Gutke, born in Gothenburg, lives and works in Malmö. He graduated from Malmö Art Academy in 2001.