After the critical success of his exhibition at Ca' Rezzonico in Venice last summer, the artist will be showing a composition of great technical virtuosity: a Janus-like double portrait of himself and fellow artist Matthew Barney. Dual-Dual Portrait is the sixth and last piece in a series of installations dedicated to the famous American artist, intitiated in june 2000, when Matthew Barney was invited by Barry X Ball to pose for him. On show also MadeIn Company, a 'contemporary art company' founded in 2009 by the artist Xu Zhen. 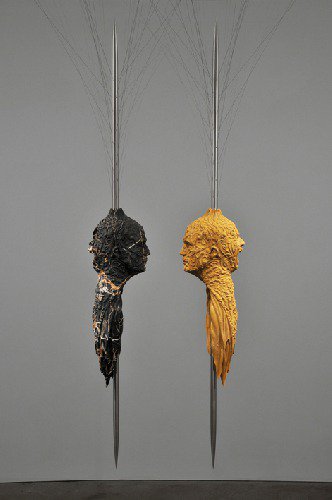 On the occasion of its first collaboration with Barry X Ball, Galerie Nathalie Obadia is delighted to present Matthew Barney / Barry X Ball Dual-Dual Portrait, a new installation by this American artist, in its Parisian gallery space. After the critical success of his exhibition at Ca’Rezzonico in Venice last summer, the artist will be showing a composition of great technical virtuosity: a Janus-like double portrait of himself and fellow artist Matthew Barney.  In the spirit of his most emblematic pieces, Barry X Ball thus continues his work on a contemporary reinterpretation of historical sculpture, taking as his models art-world personalities, in an effort to offer a total sensory experience, getting the viewer to oscillate between the tension of the sublime and the possibility of the grotesque.

Matthew Barney / Barry X Ball Dual-Dual Portrait is the sixth and last piece in a series of installations dedicated to the famous American artist, intitiated in june 2000, when Matthew Barney was invited by Barry X Ball to pose for him. Although all of Ball’s heads have been carved from stone, his portrait project has gone through many formal and conceptual changes, since its inception : the completed works vary greatly in form, scale, and materials. The Matthew Barney installations are the largest, most-complex portrait sculptures Barry X Ball has realized. « I have chosen to work primarily stone because it’s a déclassé material », explains Barry X Ball, « because of its proven permanence, because of its glorious history as a sculpture material, because it resists my every effort to control it, because its timeless nature contrasts with the of-the-moment high-tech means I utilize to shape it, because it is a challenge to make something of it more beautiful than it is in its natural state. »

While remaining true to his formal approach, with Matthew Barney / Barry X Ball Dual-Dual Portrait, Barry X Ball pushes back the limits of his practice by creating a striking sculpted piece in two tones. There is an extreme tension between the intimacy of the conversation and the repulsion and terror inspired by the javelin tearing the flesh of the truncated busts: between the bulk of the marble and the precise refinement of the delicately chiselled flesh of the two men, inspired by Italian Mannerist ceremonial armour. The artist, who composes titles for his works in the form of prose poems, shaping his sentences as he models his sculptural portraits, offers the viewer a description - sometimes clinical, sometimes poetic - of his installation :

This work is the most recent example of the exotic-stone portraits that have occupied me for the last 15 years. It was realized through a complex technical process incorporating photography, life-casting, Forton-plaster and clay hand-modeling, 3-dimensional digitization (laser-scanning), digital modeling, computer-controlled stone milling, and hundreds of hours of hand stone carving / polishing. The resultant sculpture pays reverent homage to its historical antecedents. I hope it is also completely new.

Galerie Nathalie Obadia is delighted to present the first exhibition in France by MadeIn Company, a “contemporary art company” founded in 2009 by the artist Xu Zhen, aged 35, a rising star in Chinese contemporary art, who comes from Shanghai. The iconoclastic creation of a renowned artist who, in the age of the artist as star, has decided to forgo his personal identity, MadeIn is a unique entity on the contemporary scene, a kind of “unidentified artistic object” that challenges the sacrosanct notion of the author with intelligence and ironic humour. MadeIn Company is a genuine business which employs a score of men and women to ‘”research infinite cultural possibilities,” as its founding charter states. Moving been straight reality and parody, this application of the corporate model to art-making has resulted in the creation of a think tank capable of coming up with powerful and surprising artworks in a wide variety of media (paintings, sculptures, installations), which are always seen from a curatorial viewpoint.

For its first exhibition at Galerie Nathalie Obadia, MadeIn Company has thus put together an authentic conceptual programm announced by its manifesto-like title, Sleeping Life Away, which alerts visitors to the danger of collective anaesthesia in the age of mass consumption and the reign of communications (image over substance) in politics. Six alluring and colorful large-format collages offer an alternative vision of human history. The combination of Chinese and western imagery gleaned from the Internet – traditional Chinese prints, French 19th-century caricatures, medieval images, exotic bestiaries – mediated through a patchwork of sensuous materials (fabric, feathers, sequins, beads, etc.) brings to mind the folkloric dimension of big traditional tapestries while distancing the epic yet ridiculous narratives of the dominant ideology. In this same spirit of demystifying imperial, military and colonial propaganda, three series of imposing sculptures are installed in the gallery. These black, bulky pieces recalling primitive totems feature soldier figures: in one, a man with peaked cap advances proudly on the back of a lion, epitomizing the ambiguity of power which, while claiming to protect, becomes tyrannical. This ambiguity is heightened by the contrast between the grandiose dimensions of these icons, some of them over three meters high, and the insubstantial nature of the foam from which they are made – as insubstantial as these empty and deceptive mass representations.

MadeIn Company has exhibited in numerous international institutions, notably the Ullens Center for Contemporary Art in Beijing, Kunsthalle Bern, the Ikon Gallery in Birmingham, the S.M.A.K in Ghent, and the Minsheng Art Museum, Shanghai. MadeIn Company featured in the 8th Shanghai Biennale in 2008 and at the Busan Biennale (South Korea) in 2010. With Sleeping Life Away, Xu Zhen is leading his “Company” (almost in the theatrical sense of the word) towards a productive act of emulation, prompting viewers to emerge from their existential torpor and question their assumptions about the world and its hallowed representations.