"Sound Art. Sound as a Medium of Art" presents for the first time the development of Sound Art in the 21th century. From Futurism to Fluxus, through to Twitter sonifications, the ZKM charts the history of Sound Art with a focus on contemporary practices. "Moments. A History of Performance in 10 Acts" is an international live exhibition on the history of art performance in dance and fine art. As an exhibition 'in progress', the project shows and develops within four phases new formats of museal presentation of live acts. 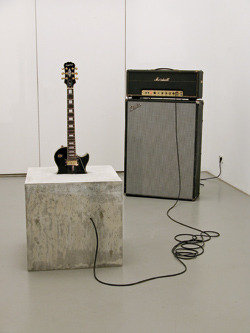 The exhibition "Sound Art. Sound as a Medium of Art" presents for the first time the development of sound art in the 21th century at the ZKM | Media Museum and in a public space. From Futurism to Fluxus, through to Twitter sonifications, the ZKM charts the history of Sound Art during the 20th century. However, focus is placed on contemporary practices: with works from 90 artists from which approximately 30 new productions from recent years will be represented, the visitor gains insights into the unique sound cosmos of contemporary art. The sound world visualizes its own exhibition architecture, and the exhibition visitor himself becomes the generator of sounds.

Visual experience dominates in numerous exhibitions. "Sound Art. Sound as a Medium of Art" emphasizes auditory experience and transforms the visual experience. The visitor is thus provided with the opportunity to become acquainted with an entirely new sound cosmos, which neither radio, film nor the music industry has been able to establish to such an extent.

The Futurist painter and composer Luigi Russolo published the musical manifesto "L'arte dei rumori" in 1913 elevating urban noises to the level of an art. In the 1950s and 1960s representatives of musique concrète and the artists of the Happening and Fluxus movement (from Yoko Ono through to La Monte Young) extended the performative aspect of music; hence, in place of composition there could be randomness, in place of music, silence, in place of an orchestra, the sea and in place of the musician, a horse. In the 1970s and 1980s Industrial Noise influenced even pop music, as well as punk music.

At the same time, loudspeakers became the building blocks of monumental sculptures, light and sound were compressed into mobile immaterial environments, inaudible realities were rendered audible in a synthesis of arts and hearing was gauged again by means of psychoanalytical experiments. Sonifications of information and medial communication, sound environments as well as telematic or medial constellations exert an influence on the present-day multiplicity of creative output. In this connection, those political questions in sound art that lead to critical examination of sound and listening, occupy a central place.

The exhibition "Sound Art. Sound as a Medium of Art" makes new sound perceptions not only experienceable in the museum: passers-by may encounter sounds in the three installations located in the forecourt of the ZKM and five installations in public areas around the city of Karlsruhe. In addition, a selected concert program with outstanding performative projects enriches the exhibition: LaMonte Young, Xenakis, Cage and Ryoji Ikeda are representative of the program’s broad spectrum. The exhibition’s wealth of sounds has also been facilitated by the richness of the archives made accessible to the Karlsruhe public for the first time to this extent. Included are the "unheard avant-garde" from Scandinavia, the Broken Music Archiv from Berlin and curated audiopoints from european archive inventories.

"Moments. A History of Performance in 10 Acts" is an international live exhibition on the history of art performance in dance and fine art. As an exhibition 'in progress', the project shows and develops new formats of museal presentation of live acts. The exhibition begins in an empty exhibition space. During the eight week duration of the exhibition project a scenic act of around ten central stages of dance and performance history unfolded − as witnessed by a group of students invited to accompany and observe for the entire period − before a public. One of the key focal points is the performances and works by women who have consciously been thematizing, transgressing and critiquing the genre boundaries between dance, performance, and visual media since the 1960s. Here, they likewise reflect on the implicit male constructions of the gaze and the gestural logic of their colleagues.

Among others, the artists represented in the exhibition will be Marina Abramović, Graciela Carnevale, Simone Forti, Anna Halprin, Reinhild Hoffmann, Channa Horwitz, Lynn Hershman Leeson, Sanja Iveković, Adrian Piper and Yvonne Rainer. The artists themselves partly document their historical performances in exhibition spaces. Boris Charmatz, in collaboration with colleagues from art and theory, approaches the documented works scenically and develops on-site a live act in a laboratory situation around this central moment of performance history. The artists Ruti Sela will be documenting this artistic approach to the work of their predecessors by way of film documentaries and will produce a film in the actual exhibition context itself. Furthermore new performative methods and actions of art education regarding historical performances will be developed.

The starting point is the interest in the processes of coming to terms with history in so-called enactments of historic performances, but which also comes to expression in the recently erupted controversy surrounding the museal presentability of performances by Joseph Beuys in photographic documentation. This is also reflected in the practice of a younger generation of performers and choreographs, such as in numerous historical appropriations and re-enactments. At the center of this is the "heroic" period of the 1960s to the 1980s in which a radical (new) definition of the genres took place in the more intimate dialog between performance movements of fine art and dance.

The exhibition "Moments. A History of Performance in 10 Acts" is composed of four phases, in each of which other actors occupy the exhibition space.

1. Act − Stage and Display (March 8−March 17, 2012)
"Moments. A History of Performance in 10 Acts" breaks with the routines of museal institutions.The exhibition begins with an empty display of ten artistic approaches. The artists of the "heroic" performance generation of the 1960s and 1970s will themselves be installing the exhibition before the public. Public discussions, panel discussions and reenactments will be held alongside the installation. The first phase closes with the actual opening of the exhibition on March 17. The performance "Practice Makes a Master" by Sanja Iveković is reenacted by Sonja Pregrad as part of the opening events and on March 18, at 4 p.m.

2. Re-Act − Interpretative Acquisition in the Art Laboratory (March 18−March 30, 2012)
In a two-week art laboratory of French choreographer Boris Charmatz and some of his selected colleagues of art and science, set up within the exhibition space, they will discuss and develop the strategies and methods of acquisition, and re-interpret the historical performances documented in the exhibition. In Open Lab on March 30 the results will be presented. A performance will be given in the theater's studio as part of the cooperation with the Baden Staatstheater on March 31.

3. Post-Production − Film Editing (March 31−April 14, 2012)
The artist Ruti Sela will produce a documentary on the Art Laboratory. During the third phase of the exhibition, the display will become the production studio of a performance art film. The film venue is the exhibition itself; its theme is the multiple interaction of the performance history within it. The visitors can follow the film production within the exhibition as it develops. The end of this project phase marks the premiere of the film on April 14.

4. Remembering the Act − Performative Mediation of the Exhibition Process by Artistic Witnesses (April 15−April 29, 2012)
The so-called "witnesses" (students from various international universities) will accompany the exhibition from the beginning. They represent the active mediators of the total process, and themselves become the main actors of the exhibition during the last phase. Their presence weaves and consolidates the chain of presences in this exhibition, which follows a dramaturgy of act, trace, recollection, interpretation, re-act, trace, memory, interpretation, re-re-act. The finnisage on April 28, concludes the fourth phase and also the exhibition itself.

/act/ion. recorded performances
presentation by the ZKM_Video Collection for the exhibition "Moments. A History of Performance in 10 Acts" at the ZKM_Medialounge, March 08,2012 – April 29, 2012, admission free