This major presentation of the work of Spanish artist Cristina Iglesias is the first in the UK. Her work has evolved in the context of European and American sculpture during the 1980s and 1990s, when a generation of artists expanded the object of sculpture into the realm of installation. This survey brings together numerous sculptural and architectural pieces installed as a sequence of personal spaces. 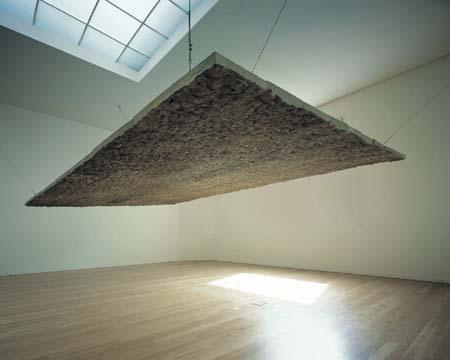 This major presentation of the work of Spanish artist Cristina Iglesias is the first in the UK. Her work has evolved in the context of European and American sculpture during the 1980s and 1990s, when a generation of artists expanded the object of sculpture into the realm of installation. This survey brings together numerous sculptural and architectural pieces installed as a sequence of personal spaces. Incorporating interests in literature, architecture and geology, the works present a sensual and evocative setting using such disparate materials and techniques as cement, alabaster, resin, bas-relief, tapestry and silkscreen.

The first work in the exhibition, Tilted Hanging Ceiling1997, creates a suspended canopy for the Whitechapel's Lower Gallery, resembling the textured walls of a cave or a fossilised seabed. Inviting the visitor to look upwards and encouraging a visual curiosity, this work exerts itself through its sheer presence and mass.

The surrounding screens of enormous copper sheets contain images of a mysterious metropolis. Iglesias forms these images by creating ramshackle maquettes from cardboard boxes, that at once suggest the cardboard cities of the homeless and mysterious temples from some post-apocalyptic desert. Using photography more like a drawing tool, Iglesias then silk-screens the images of the structures onto copper and enlarges them to a human scale to create an imaginary labyrinth.

The next room in the exhibition contains the Jealousies - large mesh screens joined together to form intimate chambers. (In Spanish the word 'celosÃ­a' means a slated shutter, or a vertical blind or the emotion jealousy.) These works are composed of small squares and diagonals that recall the ornamentation of Moorish architecture and integrate lettering like ancient hieroglyphs. Referring to the 19th century genre of Orientalism and containing extracts from the work of modernist literary visionaries like Raymond Roussel and Joris Karl Huysmans, these works play with veiled meaning and obscured views.

If caves and labyrinths provide frequent references for Iglesias, then gardens provide another. Her work is intricately connected with the idea of arcadia, an idyllic landscape or a spiritual and psychological space that evokes transience and passage to a heavenly place.

The Vegetation Rooms are constructed as larger-than-life organic environments that reduce the viewer in scale like Alice in Wonderland. At once reassuring and claustrophobic, these environments are constructed from numerous segments cast from the same mould, referring to the mechanics of creativity and reproduction. In these ways, organic and architectural structures are placed together to illustrate the slow time of geology and the fast pace of technology.

Passages, 2002 comprise overlapping canopies that recall sunscreens in Arab street markets. This work also reflects the influence of Walter Benjamin's writings for Iglesias and in particular his concept of 'the cult of distraction', where we no longer focus on specific objects but rather drift in an absent-minded way through our environment. Walking through the exhibition conjures up the experience of an urban labyrinth - the art of losing one's way where sculpture and architecture provide a backdrop for musing and daydreaming. Drawing on the languages of architecture and ornamentation, Iglesias' elaborate casts, curving walls and flying canopies create spaces of the imagination.

Guided Tour, a video made with Caterina Borelli, presents a comprehensive overview of the artist's oeuvre and will be shown throughout the exhibition.

Cristina Iglesias has had solo shows throughout Europe, Canada and the USA, becoming one of the youngest artists ever to receive a major exhibition at New York's Guggenheim Museum in 1997. Major public commissions by the artist can be found in Minneapolis, Antwerp and Barcelona.

The Whitechapel exhibition is made possible with the support of the Culture 2000 programme of the European Union, the Henry Moore Foundation, the Stanley Thomas Johnson Foundation, the Spanish Embassy Cultural Office, the Ministerio de Asuntos Exteriores de EspaÃ±a - DirecciÃ³n General de Relaciones Culturales y CientÃ­ficas, and the Instituto Cervantes, London. The Whitechapel is grateful for the support of the Exhibition Patrons, including Shane Akeroyd and Galeria Pepe Cobo.