Lost in Art. New works by the internationally renowned "Invisible Man", including his most recent collaboration with Harper's Bazaar and fashion powerhouses Gaultier, Lanvin, Missoni, and Valentino, will be on display. 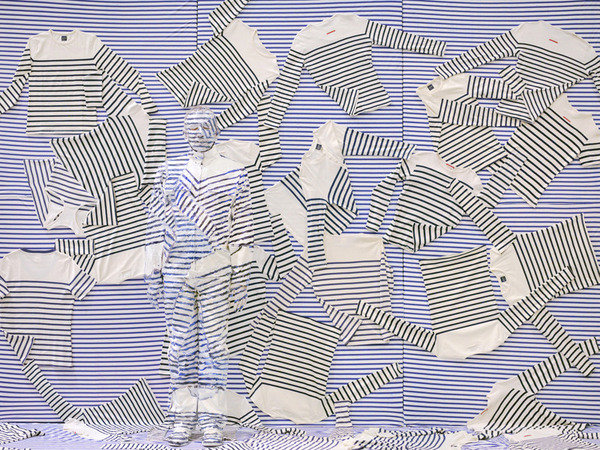 In recent years, Liu Bolin has garnered a particularly high level of international acclaim. Both his most recent and his upcoming series have centered on a concept of "hiding in the city," wherein the artist paints himself into the background of various notable locations in China, France, Italy and New York, in order to investigate the often contentious relationship between the individual and society and between man and nature.

In keeping with this project, Liu Bolin will be showing new photographs from both his Hiding in the City and Hiding in New York series. The works show Liu Bolin painted into a range of culturally and historically significant locations, conveying social commentary through various different aesthetic compositions. With Info Port, Liu Bolin speaks to the unprecedented level of unemployment faced by today's Chinese youth. The increasing pressure placed on young adults competing for jobs in densely-populated Beijing's meager job market is made conspicuous to the viewer by Liu Bolin's concealing himself in work postings on a bulletin board in the city. Another new work addressing the problems faced by this rapidly growing society, Yellow River, uses environmental damage as its focal point. Here, Liu Bolin hides in the river, the land of his childhood home visible behind him. This river, now so polluted that its water is no longer suitable for drinking, acts as a site of conflict between man and his environment in which the objects man creates wreak havoc on the place of man's genesis. A more direct critique of China's changing society, Panda examines the Chinese newfound preoccupation with commercialism. The work confronts the viewer with a palpable materialism, whereby the viewer can sense an infatuation with commodity that has recently supplanted many elements of traditional Chinese culture. Through the numerous identical stuffed pandas, Liu Bolin forces us to acknowledge the pull of material objects and the power that they wield in contemporary China.

The two newest releases from Hiding in New York convey different perspectives on the legacy of September 11th. The composition of Ground Zero is serene, its colors seeming rather quiet and subdued. The new Freedom Tower appears barely visible through the fog, its shadowy presence reflecting our trepidation about recovering from the trauma of this event. The photograph denotes our cautious, slow process of healing while also preserving the memory of trauma. Conversely, Tiles for America demonstrates a more direct response to the tragedy by featuring tiles whose images memorialize September 11th. Each tile is an art project in its own right, but together the tiles compose a unified visual message reflecting on the importance of patriotism, courage and unity. Through his use of the tile wall as a site of camouflage, Liu Bolin preserves these socially and historically significant sentiments, thus transforming history into art.

In his sculptural piece for this exhibition, Liu Bolin constructs a peony flower using only cellphone chargers that he himself crafted. In Chinese tradition, the peony represents prosperity, and its symbol represents a desire for the attainment of such prosperity. Similarly, in global contemporary culture, the cellphone serves as a technological and commercial manifestation of this desire. In this particular reincarnation, people constantly seek to buy the latest version of a product, to outdo others around them, to replace the quickly outdated with the new best thing. Through this piece, Liu Bolin provides commentary on the eternal human quest for affluence and success, the appearance may be ephemeral but the essential driving factors remain constant and unchanging.

In collaboration with Harper's Bazaar, Liu Bolin met with Jean Paul Gaultier, Elber Albaz of Lanvin, Angela Missoni, and Maria Grazia Chiuri and Pierpaolo Piccioli from Valentino, as they became the latest subjects of his camouflaging performance. The designers underwent the process of becoming nearly invisible within a background of their most celebrated signature designs. Creating four fantastic photographs, this collaboration stands as a true and marvelous beacon of the merging of fashion and art.

The exhibition will be on view at Eli Klein Fine Art from March 20th through May 11th, 2012 and is accompanied by a fully illustrated catalogue with an essay by Michelle Roy. The artist will be present for the opening reception on March 20th from 6 - 9 PM.

Liu Bolin will be creating new photographs for his series Hiding in New York during the week preceding his opening. For further information, please contact the gallery at (212) 255-4388 or info@ekfineart.com.