With these new black and white paintings, Chen continues the journey begun with her 'Landscape' series of 2011. Continuing her 'Wonderland Stereo' series Atlan has invented a project of phenomenal detail: a fictional record label complete with a line-up of fictional bands, their albums, their song titles - and even their lyrics. 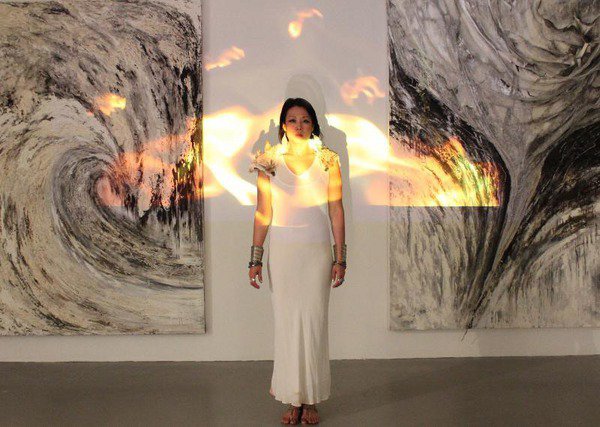 Angel Chen
Return to the Shadowlands

With these new black and white paintings, Angel Chen continues the journey begun with her "Landscape" series of 2011. Dauntingly tall canvases set out to harness the energy of the natural world using the once-worn and now-discarded as 'raw materials.'

Chen describes her work as "inspired by nature and all its fragile and harsh beauty; painting represents the sensuous over the intellectual, process over concept, the act over the idea." With these works, Chen creates a new personal reality based on ancient forms. The conceptual realm of philosophy and the materialism of high fashion are blended into these violent interior landscapes, merging into a whole.

Elemental forces are articulated onto rough wood canvases through remnants of suede, silk chiffon, fur, and gauze. The duality evokes the eternal oppositions of masculine and feminine, visible and invisible, and life and death. The pale alchemy of aged grays, blacks, and whites (snow rushing down a steep slope in "Avalanche"; the opaque gray air in "Tornado"; the dissolving curve of "Big Wave") conjures an existential reverence for a wilderness suffused with a hidden spiritual gravity. Leaned and not hung, these works defy the planar surface of the canvas and occupy space as both painting and sculptural object. Ultimately they reveal hidden geometries and metaphysical forces within the subtext of the beautiful and sublime.

Angel Chen was born in Taiwan and raised internationally. She received her BFA from UCLA and MFA from CalArts, and has since been the recipient of numerous prestigious awards and residencies including the Ahmanson Award, Skowhegan Residency, and commissions for the Annenberg Collection. She has traveled extensively and exhibited in Europe and Asia.

Continuing her "Wonderland Stereo" series inspired by the aesthetic universe captured in her photography, French artist Vanessa Atlan has invented a project of phenomenal detail: a fictional record label complete with a line-up of fictional bands, their albums, their song titles - and even their lyrics.

In creating this imaginary universe, Atlan questions American pop culture and the production of modern myths that lies at its core. "Wonderland Stereo" is a metaphor of the star-system culture, edging the line between fiction and reality. Biographical elements of Atlan's experience in Los Angeles, where she settled in 2009, are blended into the details of these bands and their releases. All of the characters are deeply linked to the story of Atlan's life. Friends, family, and places where she lived appear on the album covers.

As a work in progress, "Wonderland Stereo Part I" was presented at Here is Elsewhere Gallery in 2011 and continues to be presented as an evolving environment.

Vanessa Atlan was born in Paris, France. She holds an MA from from Paris-Sorbonne University. Atlan has had solo and group shows in galleries and museums in Europe including Madrid Foto, Madrid; Galeria Tagomago, Barcelona, Spain; Galerie Philippe Chaume, Paris; Palazzo Spinelli, Naples. She is the author and photographer of the book "Naples, Portrait de Villes" (Be-Pôles editions, 2007) and "L'Hippocampe," a portfolio including 19 original lithographs (Woolworth Studio, Paris). Atlan lives and works in Los Angeles.

This opening coincides with multiple openings at the PDC, along with the launch of Westweek, the annual trade show for designers.

HiE is part of part of "Design Loves Arts", a residency program shaped by artistic viewpoints and experiment.

Directions to Here is Elsewhere at the Pacific Design Center

Pacific Design Center is located on the northeast corner of San Vicente Boulevard and Melrose Avenue in the heart of West Hollywood, one mile east of Beverly Hills. Self and valet parking @ PDC. Complementary parking for press.

Image: Performance Still from 'The Divine Path of the Lotus Born to the Secret Temple of the Radiant Sun,' HiE Gallery, January 12, 2012