Vile, Evil Veil. the artist, writer and filmmaker, creates works which explore the dynamic of power and pleasure, and negotiate fictional personas and cultural politics. The exhibition consists of two seminal works: the award winning film 'Out' (Tse) and the installation piece 'Live and Die as Eva Braun'. 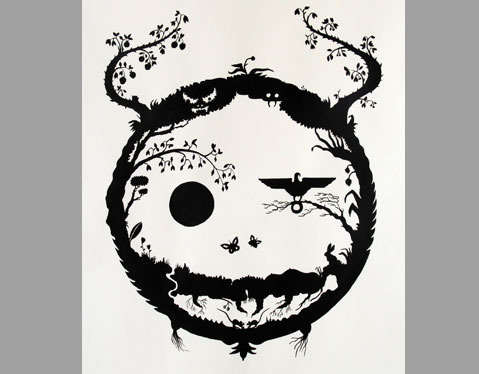 Iniva (Institute of International Visual Arts) presents the first UK solo exhibition of Israeli artist, writer and filmmaker Roee Rosen:Vile, Evil Veil. The exhibition consists of two seminal works: the award winning film Out (Tse) and the installation Live and Die as Eva Braun. Roee Rosen is one of the most influential artists in Israel, and is known not only as a virtuoso painter, but also as a novelist, a polemic intellectual, and an admired teacher.

"The demon moves from one surrogate to another, and ‘belongs' to them all, he is ours. This process of self-implication is always on my mind when meddling with the pleasures that art offers ( beauty, desires, fantasies, aesthetics) as bound with politics (power, discontent, reality, ethics)." Roee Rosen

Through innovative role-play Rosen stages the ethical dilemmas that underlie social reality in his native Israel, and beyond. In Live and Die as Eva Braun (1995-97) the spectator is invited to become Eva Braun, Hitler's lover, during the last days of the war, experiencing intimacy with the dictator, his suicide and a short trip to hell. When displayed in the Israel Museum in 1997 this work drew such controversy that the then Minister for Education requested its closure. Since then the work has been acclaimed as ‘groundbreaking' and displayed in Berlin, New York, and Warsaw. Live and Die as Eva Braun is an installation and a book, from which 66 works on paper and ten segments of text are on display in the ground floor gallery Project Space 1.

Rosen's award winning film Out (Tse)(34mins; 2010) is screened upstairs at Rivington Place. The film deals with boundaries between the body and state, radical sexuality and politics through a staged domination/ submission exorcism scene set in an ordinary living room. The public is advised that this film contains scenes of a sexual nature.

Rosen has also created a special piece for the front window of Rivington Place.

Roee Rosen: Vile, Evil Veil contributes to the discussions about the Middle East which Iniva has explored through recent exhibitions and projects.

A series of workshops and events accompany this exhibition, Blasphemy and Redemption. They explore themes of sexuality, politics and ventriloquism, looking at memories of oppression and the democratic of difference in the Middle East. Co-ordinated by Adrian Rifkin, Professor of Fine Art, Goldsmiths, University of London.

Artist's talk: Thursday 22 March, 6:30pm
An opportunity to hear exhibiting artist Roee Rosen talk about his past and present work.