Sweethearts. Using their individual respective practices - artist, designer, or architect - each couple has collaborated on a unique and significant work, each piece being jointly negotiated, conceptualised and created. For the concurrent exhibition Patrick Coyle invited Stef Hirsch to curate previous performance pieces, works on paper and sculptures that he made since they first got it on in 2010. 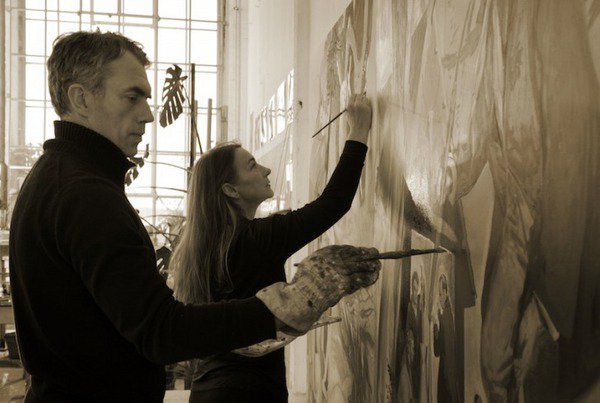 Pippy Houldsworth Gallery is delighted to present rare collaborations by some of the world's most important artist couples in Sweethearts. Using their individual respective practices - artist, designer, or architect - each couple has collaborated on a unique and significant work, each piece being jointly negotiated, conceptualised and created. Sweethearts brings together collaborations by Antony Gormley and Vicken Parsons, Dan Graham and Mieko Meguro, Richard and Jane Wentworth, Sam Durant and Ana Prvacki, Gary Hume and Georgie Hopton, Neo Rauch and Rosa Loy, Ian Davenport and Sue Arrowsmith, Mary Kelly and Ray Barrie, Rem Koolhaas and Madelon Vriesendorp, and Kelly Barrie and Sherin Guirguis.

The exhibition draws out conversations and narratives about creativity and collaboration, from Modernist ideas around authorship and self-expression, to the personal, conceptual and political dynamic involved in the process of creation. One of the most provocative exhibitions in Pippy Houldsworth’s new gallery space, this exhibition will host a series of related talks and events.

Pippy Houldsworth Gallery is delighted to present the fourth commission for The Box by artist Patrick Coyle.
The Box, specially designed by Simon Dance Design, is a project space consisting of a floating white cube set inside a black vertical opening. It is a unique architectural space through which the gallery facilitates projects with important emerging and established artists. Invited artists are commissioned to make an artwork specifically for The Box. Coyle frequently uses language and performance to examine personal and hidden narratives.

Working with found objects, images and texts he places strategic constraints on his own methods of presentation. For the exhibition 78601404_The_Practice_of_Patrick_Coyle, and with the concurrent exhibition ‘Sweethearts’ in mind, the artist invited Stef Hirsch to curate previous performance pieces, works on paper and sculptures that he made since they first got it on in 2010.

The performance installation Alphabetes (2010) is the artist’s attempt to demonstrate various examples of miscommunication, represented here by the twenty six letters of the alphabet. For example, the letter D stands for the ‘lower-case two-letter abbreviation for the word down’, whereas later we find the letter U standing for ‘the realization of the word up upsideown being dn, the aforementioned lower-case two-letter abbreviation for the word down.’ These convoluted semantic connections are further complicated by Coyle’s delivery of the script from memory.

Continuous Polymorph Project (2012) is made from a remouldable thermoplastic, which is reshaped on a weekly basis. Coyle documents the various forms by producing individual paintings from each one, which accumulate in the space over the course of the exhibition.

Ouroboros (Garden Worm Ornament), (2011) is a hanging plaster sculpture depicting the ancient symbol of the ouroboros, traditionally representing cyclicality and the renewal of life. Coyle’s updated version of this motif was appropriated from a mass-produced ornament found in a supermarket and signifies the artist’s concern with self-reflexivity and mythology.

The exhibition borrows its title from the print 78601404_The_Practice_of_Patrick_Coyle (2011) a speech written for Coyle by an online essay-writing company.

Stef Hirsch was born in New York, 1986. She completed her MFA Curating at Goldsmiths, University of London in 2011 and BA Art History & BFA Sculpture at Cornell University, NY in 2009. She recently co-curated the exhibition Fig.3: I don’t know what to say, David Roberts Art Foundation, London